Expired News - Watching Willa: From Category 5 to Canadian Winter Storm - The Weather Network
We use cookies on this site to improve your experience as explained in our Cookie Policy. You can reject cookies by changing your browser settings.   READ MORE I ACCEPT

Wednesday, October 24, 2018, 10:13 AM - Hurricane Willa charged the coast of western Mexico Tuesday evening and while it has weakened tremendously over land, we're far from done with this system. Adding itself to the list of 2018's rapidly intensifying storms, Willa blew up from a tropical storm into Category 5 hurricane in just 48 hours last weekend, and the storm's destructive narrative will continue for the next week as it traverses the continent, then goes on to morph into a potent storm for eastern North America.

We look at the storm's projected path, and what impact this massive tropical system will have here at home, below.

Hurricane Willa, despite weakening from a Category 5 strength on approach to the Mexican coast Tuesday evening, remained a dangerous Category 3 storm at landfall near Isla Del Bosque, south of Mazatlan. The storm continues to weaken rapidly as it moves over land, but this isn't the end for the core of this system. The remnant low will make its way across the southern U.S. and into the Gulf states through the remainder of the week.

As we head toward the weekend, a trough in the jet stream will dive south over eastern North America and encounter the former hurricane. The sudden clashing of cold Canadian air dipping south with the trough and warm, tropical moisture from the Gulf and along the Gulf Stream current will re-ignite the low, strengthening it into a powerful storm set to track north along the U.S. Eastern Seaboard and into eastern Canada this weekend. 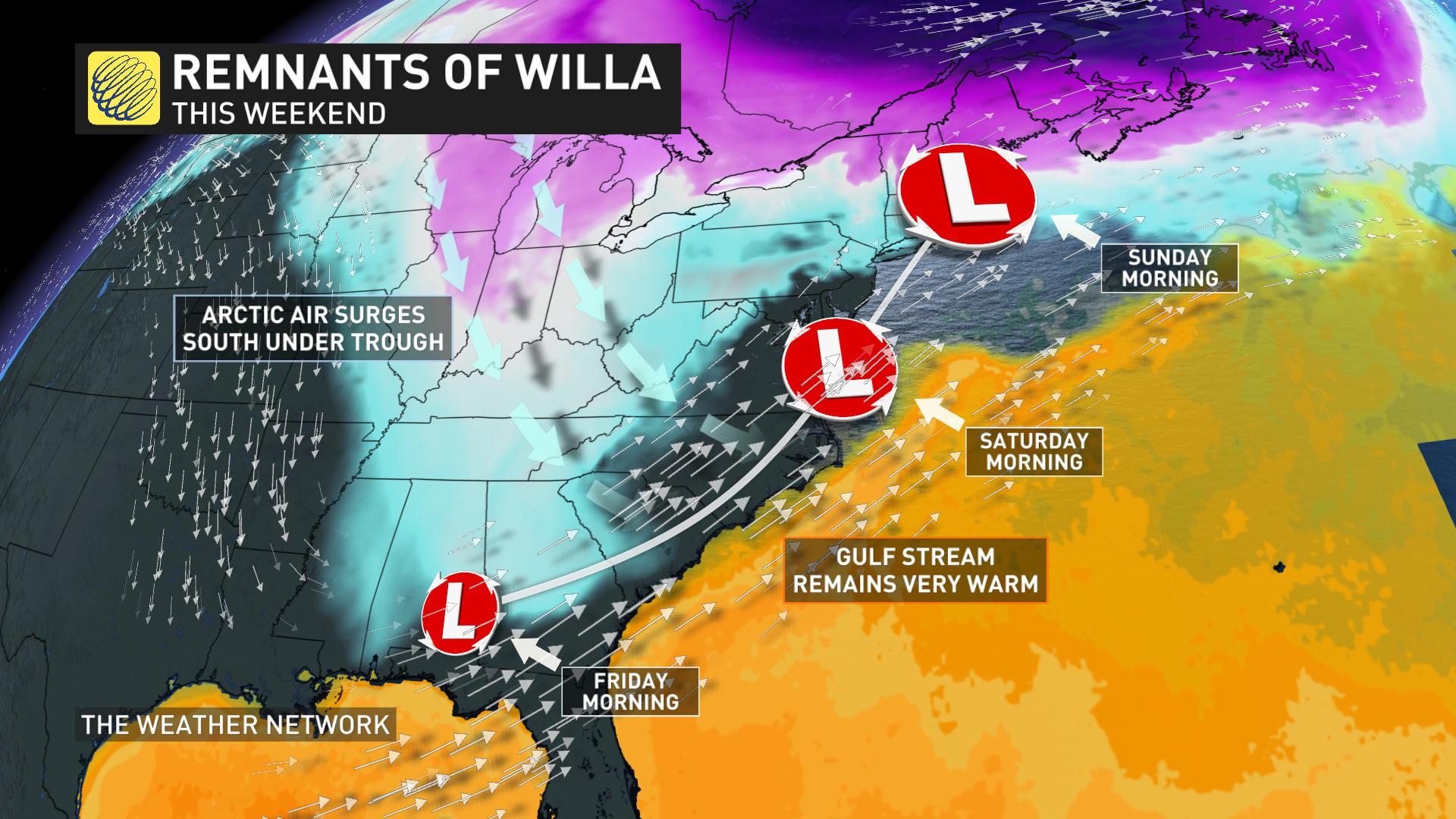 For more than week now, forecast models and their ensemble members (outputs from same model, but with the input conditions changed subtly to provide an array of solutions) have been consistently highlighting this scenario to end October.

Looking at an updated ensemble forecast (pictured below), we're still seeing considerable spread in the potential locations of the low -- all those small Ls on the map represent the end position of each ensemble member. While they may look wildly spread out, speaking in model ensemble terms, this clustering is close enough together to give forecasters high confidence that this system will develop and take aim at New England and parts of Eastern Canada. 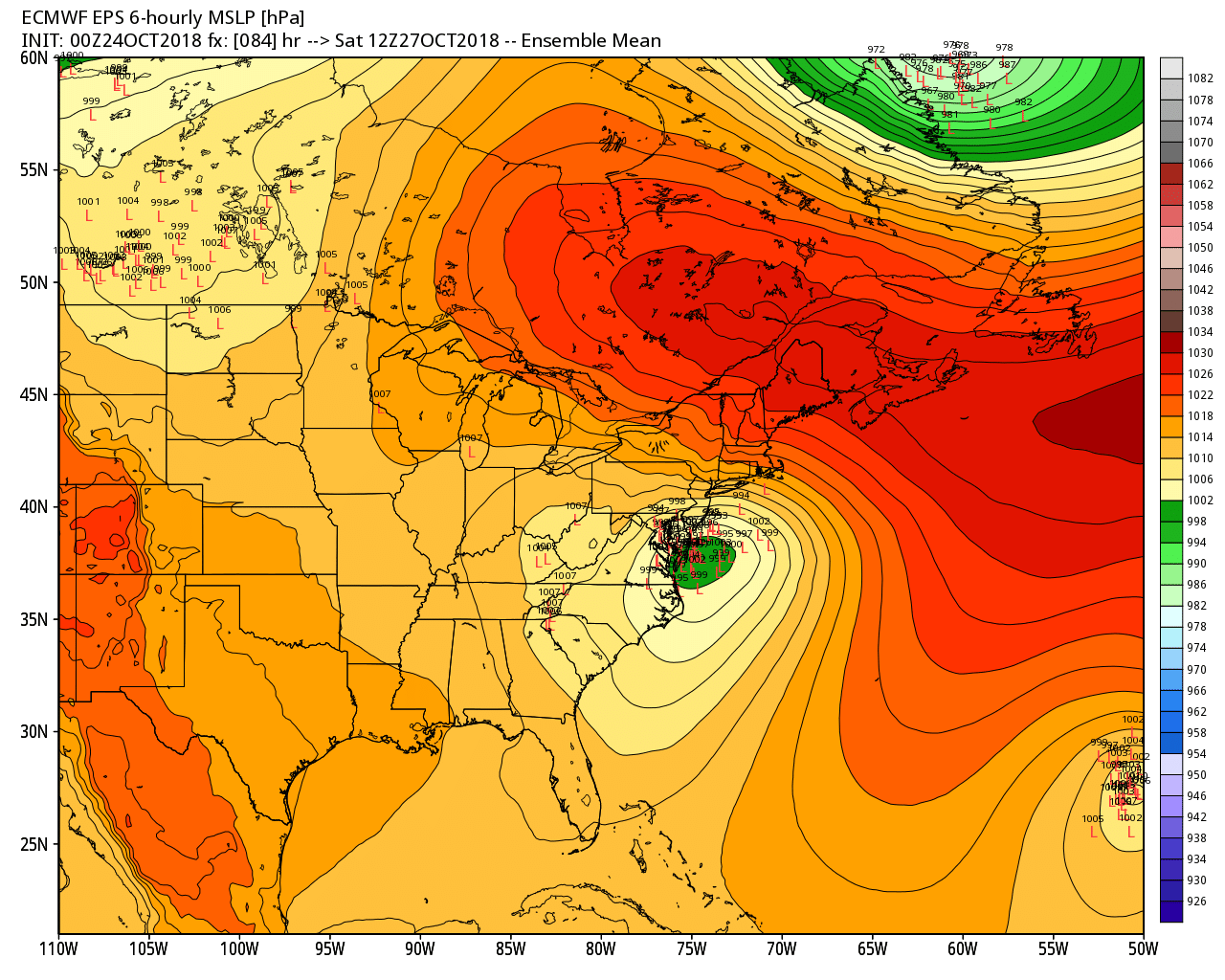 That said, as you might imagine, confidence in the specific details remains low due to a couple of factors, including the timing of an Alberta Clipper as it tracks over the Great Lakes this weekend. As the intensifying storm races up the east coast Saturday, it will begin to interact with the clipper to its west, and this interaction will strongly influence the exact track and resulting impact of the storm for Canadians.

Imaged below you can see the direct effect the clipper has on the uncertainty in the positioning of the east coast low on Sunday by the diffused clustering. 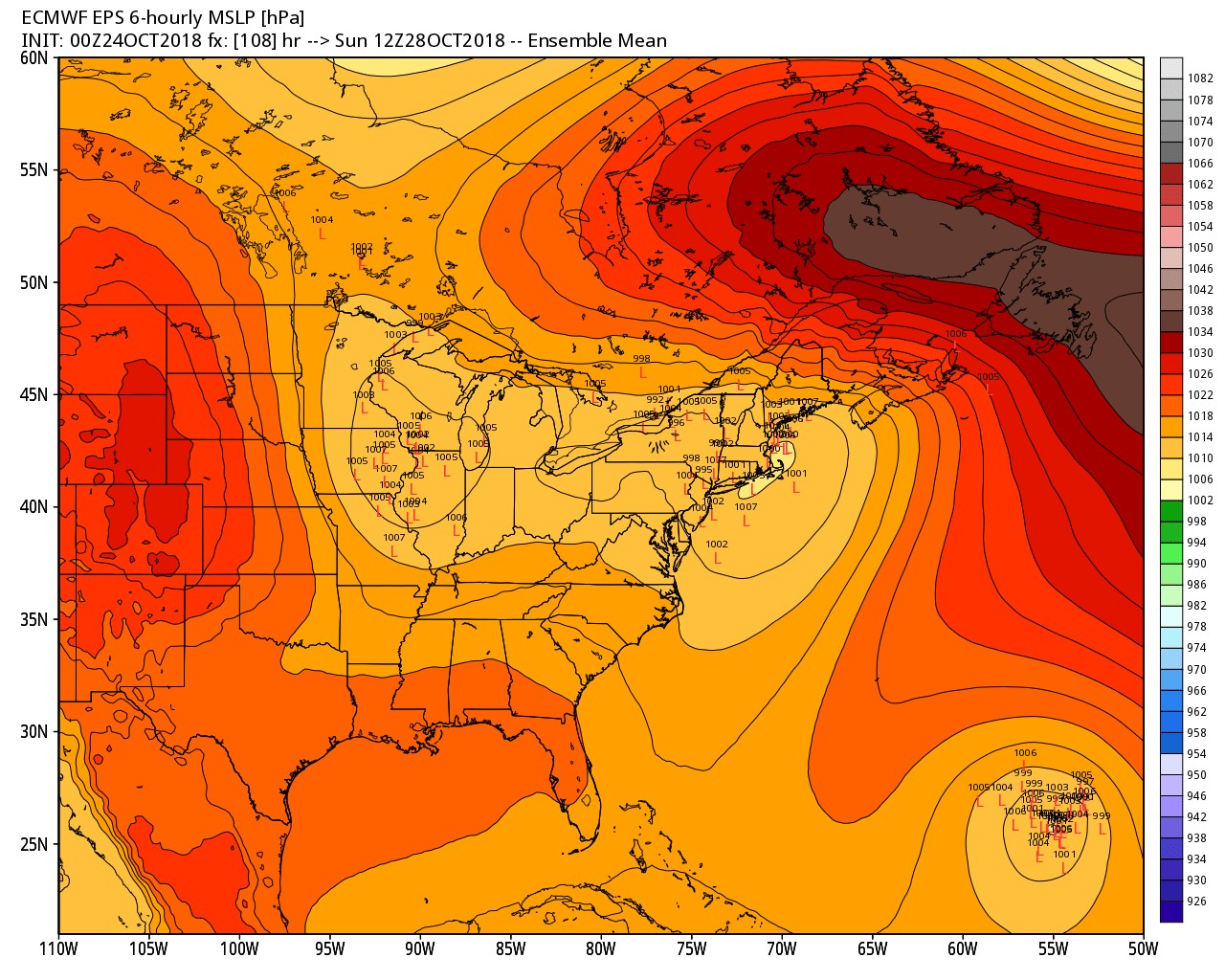 Forecasters are still seeing signs that this storm may be the first true nor'easter of the season for parts of New England, with strong winds and heavy rain near the coast. However, the greatest impacts ahead for the U.S. will likely be in the northern Appalachians and Adirondacks, with the potential for tree-snapping snow and ice, and strong winds as the system rapidly turns into a high-elevation winter storm this weekend.

Here at home, Atlantic Canada is most likely to see strong winds and heavy rain as well, but stay in the warm sector of the storm -- meaning that active weather comes with mild temperatures.

It's a trickier story for parts of Ontario and western Quebec, including the Laurentians, where some places are likely to see accumulating snowfall beginning late Saturday into Sunday, enhanced over the higher terrain and away from the Great Lakes. 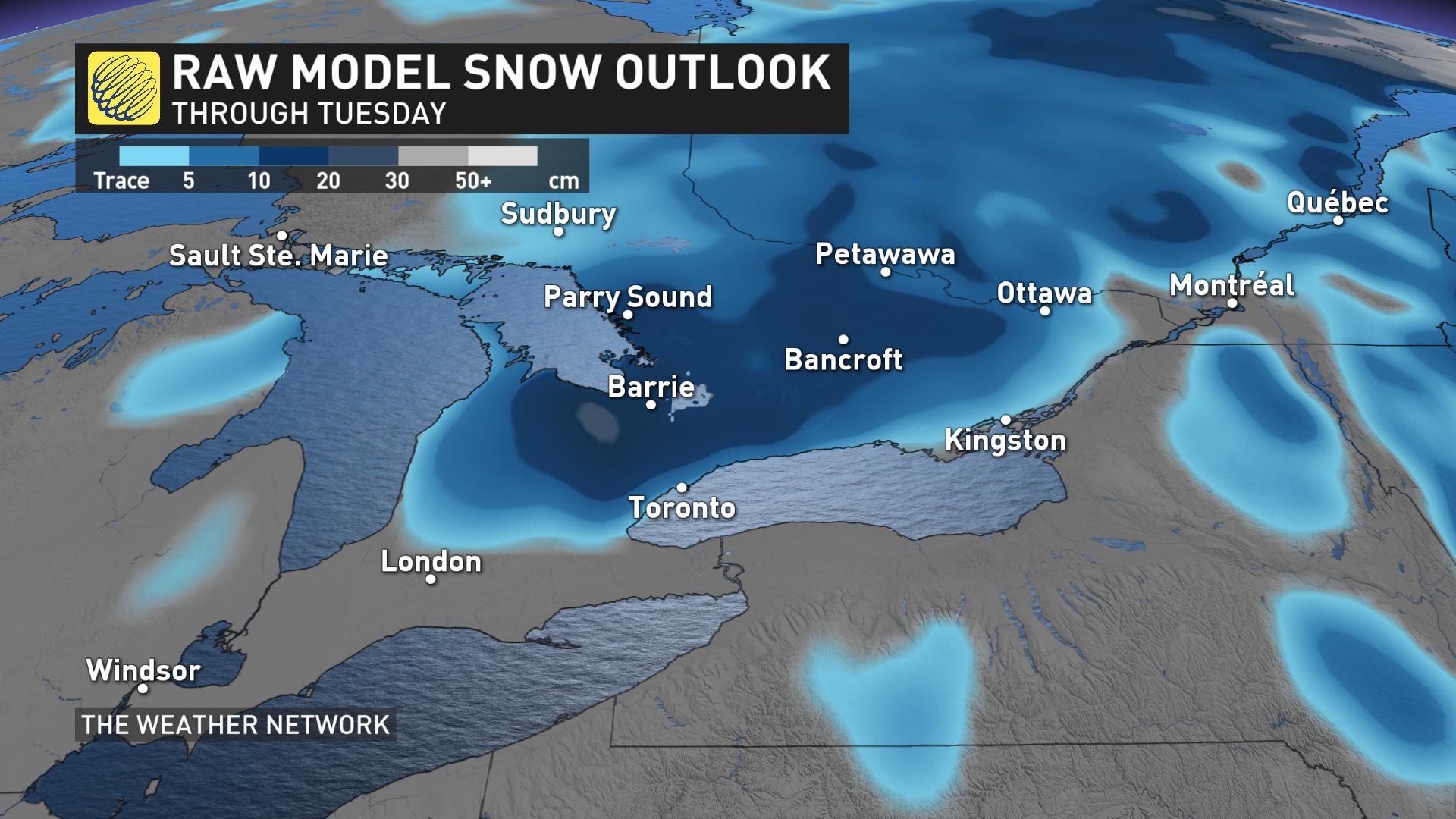 How far east and south the snow falls will depend on the how far west the low tracks -- something that will be refined as the storm approaches. Regardless of track and potential storm impacts, it will be a chilly and unsettled weekend ahead for those in Ontario.

Stay with us as we track this developing system.