Expired News - Did disastrous hurricanes like Katrina happen in the 1900s? - The Weather Network
We use cookies on this site to improve your experience as explained in our Cookie Policy. You can reject cookies by changing your browser settings.   READ MORE I ACCEPT

Did disastrous hurricanes like Katrina happen in the 1900s?

Friday, June 15, 2018, 2:56 PM - After 2017's historic hurricane season that caused thousands of deaths and hundreds billions of dollars in damage, scientists are looking into past environmental conditions to investigate how climate change has impacted hurricane patterns in the last century.

Natural disasters are one of the biggest threats to national economies and recent years have shown historically destructive storms and unprecedented damages that are costing more and more - last year's Hurricane Maria caused the longest continuous blackout in U.S. history and was only resolved nearly halfway through this year's hurricane season.

Are we doomed to keep weathering monstrous hurricanes like last year’s Harvey, Maria, and Irma?

Scientific records show us that disastrous hurricanes happened in the past well before carbon dioxide emissions reached staggering levels or sea levels began rising. The deadliest natural disaster ever in the U.S. was a category 4 hurricane that occurred in 1900 in the island city of Galveston, Texas and killed between 6,000 and 12,000 people. A few decades later another category 4 hurricane killed an estimated 2,500 people in Okeechobee, Florida. 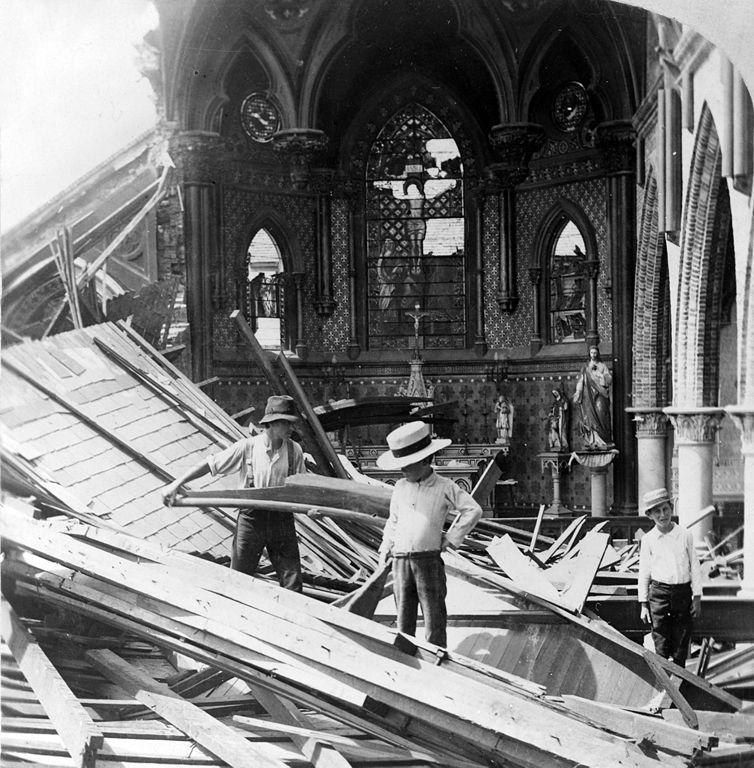 Interior of St. Patrick's Church in Galveston, Texas after the hurricane in 1900. Credit: Wikimedia Commons

In the past hundred years building infrastructure has significantly improved to withstand harsh weather, satellites and monitoring systems have been able to give us advanced notice of incoming storms, and emergency evacuation measures have saved thousands of lives. In 2005 Hurricane Katrina and subsequent flooding claimed the lives of over 1,800 people with damages estimated at $211.1 billion USD, and the damage from hurricanes Harvey, Irma, and Maria combined exceeded $265 billion USD, all occurring in a span of five weeks from August 25 to September 18 in 2017.

The damage and resulting costs of hurricanes are increasing and research shows carbon dioxide emissions from human activity could partly be to blame. To figure out if these gigantic storms are fuelled by climate change, scientists are able to simulate hurricanes in environmental conditions from over a hundred years ago to see if they would have the same formation and intensity as the actual event.

Scientists from Virginia Tech published a study that involved simulating a hurricane with the same features as Hurricane Katrina in 1900 climate and sea level conditions to investigate if the outcome would have caused a comparable amount of damage caused by Katrina’s winds and subsequent flooding in New Orleans.

This study used historical climate data to adjust parameters to mimic 1900 conditions. Pressure differentials and wind speeds were scaled down for each degree of greenhouse gas-induced warming, and other conditions such as sea surface temperature, atmospheric temperature, and moisture were adjusted to create accurate parameters for 1900 conditions. Infrastructure conditions from 2005, such as roads and levees, were applied to maintain the same hydrodynamics and accurately compare damages in the different scenarios.

The findings revealed that there were significant differences between the simulation and the actual event - flood levels would have been 0.9 metres lower in some of the canals and the peak flooding elevation would have been approximately 0.5 metres below the 2.1 metre elevation that caused the levee failures. The researchers also state that sea level rise caused flood elevations to be 15 to 60 per cent higher in coastal areas, meaning that the extent of infrastructure damage could have been significantly less severe, hundreds or even thousands of lives could have been saved, and less resources would have been needed to rebuild the city.

WATER VAPOUR - THE LINK BETWEEN CLIMATE CHANGE AND HURRICANES

One of the most important greenhouse gases is frequently forgotten in global warming discussions - water vapour.

Approximately 60 per cent of the greenhouse gas warming effect comes from water vapour and it plays a large role in controlling the Earth’s temperature. As the atmosphere and oceans warm the rate of evaporation speeds up which causes a greater amount of water vapour to be stored in the atmosphere. Water vapour acts as a ‘fuel’ for hurricanes because it releases latent heat that warms the surrounding air as it changes from liquid to vapour. As a hurricane forms it draws surface air towards it’s low pressure center where winds get stronger and cause even more evaporation.

The melting glaciers and ice sheets are creating more availability for water to be absorbed into the atmosphere and are also causing sea level rise that is threatening coastal communities.

With each increase in 1 degree Celsius the atmosphere holds seven per cent more moisture, or four per cent more per 1 degree Fahrenheit, causing more water vapour in the air, which is a critical factor for precipitation - in 2017, which had a particularly severe hurricane season, the average global sea surface temperature (SST) was 0.67 degrees Celsius above average global SSTs from 1910-2000.

Over time it has been made apparent that cost-cutting approaches and flawed engineering of the levees largely contributed to their failures and flooding, the study from Virginia Tech demonstrates the complex ways that global warming interacts with delicate hydrological relationships - seemingly minimal increases in ocean temperatures resulted in a storm so severe it was calculated to have a likelihood of occurring only once in every 400 years.

Another recent storm that broke historical records was Hurricane Sandy in 2012, a category 3 storm that was downgraded to a tropical storm by the time it made landfall on the United States Eastern seaboard. The devastation included 150 deaths, $71.5 billion USD in damage, briefly shut down the New York Stock Exchange, and triggered mass flooding in New York and New Jersey.

The unusual size and northeast trajectory of the storm had a likelihood of occurring once in every 700 years and was caused by the combination of an end-of-season category 1 hurricane with a cold front and the formation of a second storm. 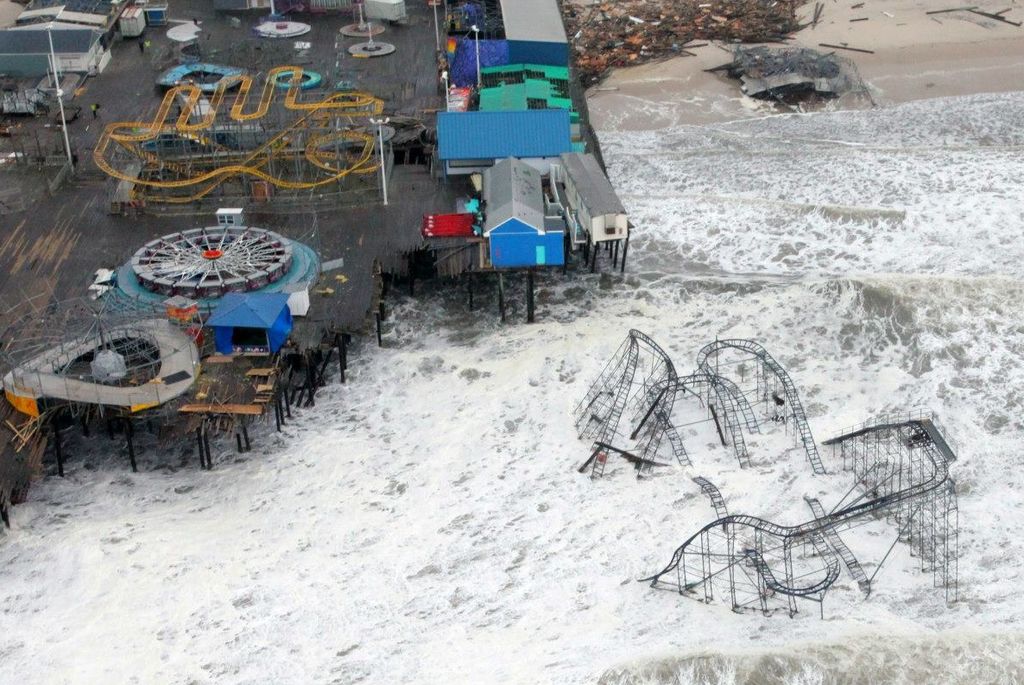 Dr. Garry Lackmann from North Carolina State University published a study that investigated what a storm with similar characteristics as Hurricane Sandy would have looked like in 1900 and in 2100.

Using the Weather Research and Forecasting Model, Lackmann simulated past and future climate conditions for temperature, carbon emissions, moisture, geopotential, and wind, and found that the 1900 hurricane would have made landfall approximately 100 kilometres south-southwest of the 2012 event and would have been approximately 5 Pascal units weaker.

The 2100 projection found that the hurricane would land over 200 kilometres north-northeast over the 2012 event and would have a substantially greater intensity with increased water vapour and heavier precipitation, with an average minimum central pressure at landfall being over 10 Pascal units.

The increasing strength and precipitation of the future hurricane simulation and a more northward landfall point suggests that the trajectories of future hurricanes could be increasingly north along the Eastern seaboard and affect places in the United States and Canada that have never before faced hurricanes or superstorms.

DID CLIMATE CHANGE CONTRIBUTE TO THESE STORMS?

In the aftermath of Hurricane Irma in September 2017, Environmental Protection Agency Administrator Scott Pruitt told CNN during an interview that it was not the time to discuss climate change, stating that the focus should be on providing access to clean water and fuel.

When asked about increasing temperatures and their effects on extreme weather events Pruitt replied that it would be very insensitive to the people in Florida to discuss climate change issues while they are recovering from the storm.

President Donald Trump visiting Puerto Rico after Hurricane Maria, where he was recorded throwing aid materials, such as paper towels, to a crowd of victims. Credit: Wikimedia Commons

In a study published by Kevin Trenberth from the National Center for Atmospheric Research, he states that the answer to the frequently asked question ‘Was this extreme weather event caused by climate change?” is the wrong question to even be asking. Not because of timing or matters of sensitivity, but because all weather events are impacted by climate change because the environment is different than what it used to be, due to increased temperatures and moisture.

The National Oceanic and Atmospheric Administration has forecasted that the 2018 hurricane season in the Atlantic will be near- or above-normal for 2018.

WATCH BELOW: WHAT is the calm before the storm? | HOW does it work?