Expired News - Rare Post-Tropical Storm Leslie lashes Portugal, Spain - The Weather Network
We use cookies on this site to improve your experience as explained in our Cookie Policy. You can reject cookies by changing your browser settings.   READ MORE I ACCEPT

Saturday, October 13, 2018, 9:21 PM - As clean up efforts continue in Florida after Hurricane Michael's historic landfall, in Europe Post-Tropical Storm Leslie has defied historical trends, targetting Portugal and Spain with strong winds and rain as it approached Saturday, making landfall overnight. Not only is this a rare trajectory, but this storm is expected to bring unprecedented winds to the region, and potentially cause flash flooding. We take a look at this unusual system, and its projected impacts, below.

(Related: Shocking scenes from the aftermath of Hurricane Michael)

Leslie first became a named storm near the central Atlantic; not unheard of, but not exactly the prime breeding ground for tropical systems, which tend to spawn in the Atlantic from lows further south and closer to Africa. In its early stages, the upper level currents in the air that 'steer' tropical systems were fairly weak, and the storm ambled around aimlessly to start, narrowly missing being absorbed by upper level troughs of low pressure crossing the ocean to its north, and being rebuffed from moving west by high pressure centered near Bermuda.

Looking back over the advisories issued by the U.S. National Hurricane Center (NHC), many of them mention the expectation that Leslie would be 'picked up' by one of these troughs and pulled eastward, as this happens to many storms that form so far north in the Atlantic. However, Leslie repeatedly defied the odds, lingering in its region of weak steering flow, and gradually wandering in and out of regions of warmer sea surface temperature; essentially keeping itself alive, but not strengthening much, or moving with much purpose.

This behaviour defied model guidance (thanks in part to the very few data collection points available mid-ocean) and forecaster wisdom alike; as recently as Wednesday, forecasters at the NHC were frustrated by Leslie's eventual fate.


#HWRF suggests #Leslie may transition to a #PTC at or after landfall in #Portugal.

A rough analysis shows the cold front does not merge w/ the center of the vortex until after landfall.

This will be tricky to define as the front also becomes ill-defined inland. pic.twitter.com/53J1fjFgDl

ONE FOR THE HISTORY BOOKS?

Leslie's path puts this storm in rare company; only one other tropical system on record, Hurricane Vince in 2005, has made landfall on the Iberian Peninsula, when it sailed into extreme southwestern Spain as a tropical depression. Although it was a close call, Vince didn't track over Portugal.

While the storm achieved Category 1 hurricane status, Leslie has since been downgraded to a post-tropical storm. However, it was still packing a punch as it moved inexorably toward the peninsula.

"The centre of Leslie will be near the west-central coast of Portugal in a few hours, and move inland over portions of central and northern Portugal tonight, and across northwestern and northern Spain Sunday morning," the National Hurricane Centre said in its 5 p.m. bulletin Saturday. 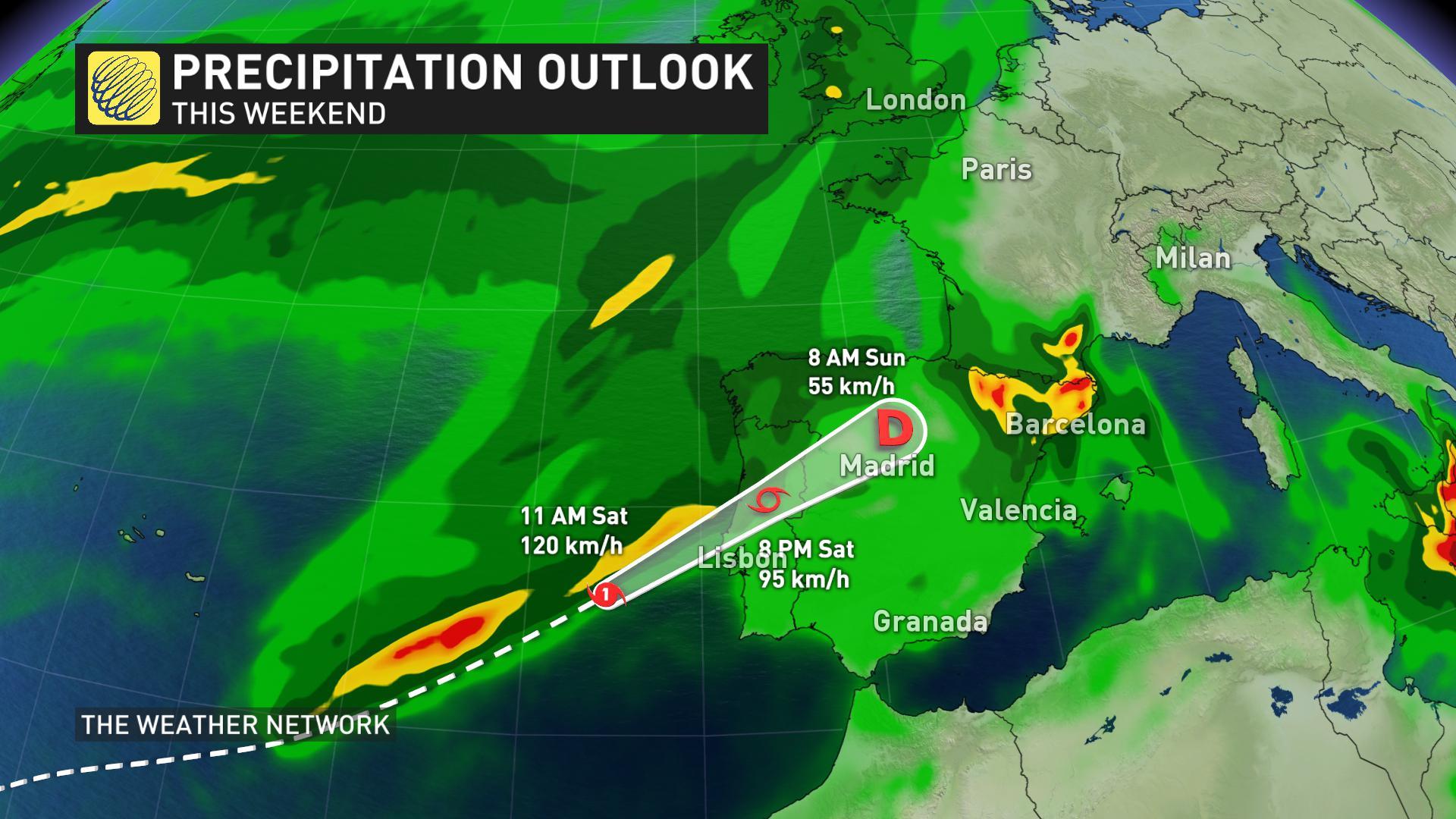 Remnants of tropical systems are not particularly common either, as they are typically swept up by the jet stream tend to take a path further north into the United Kingdom.  There are are a handful of extratropical storms in the history books that have brought rain and wind to Portugal and Spain in the past, including 2015's Joaquin, and 1991's Bob.

Residents of Portugal have been experiencing one of the stronger storms in recent memory crash even before the storm's collision with the coast, expected overnight local time. Life-threatening rough surf, powerful winds, and up to 125 mm of rain are expected for parts of Portugal and Spain by the time all is said and done. Flash flooding is another one of the concerns highlighted by the Portuguese and Spanish weather agencies. 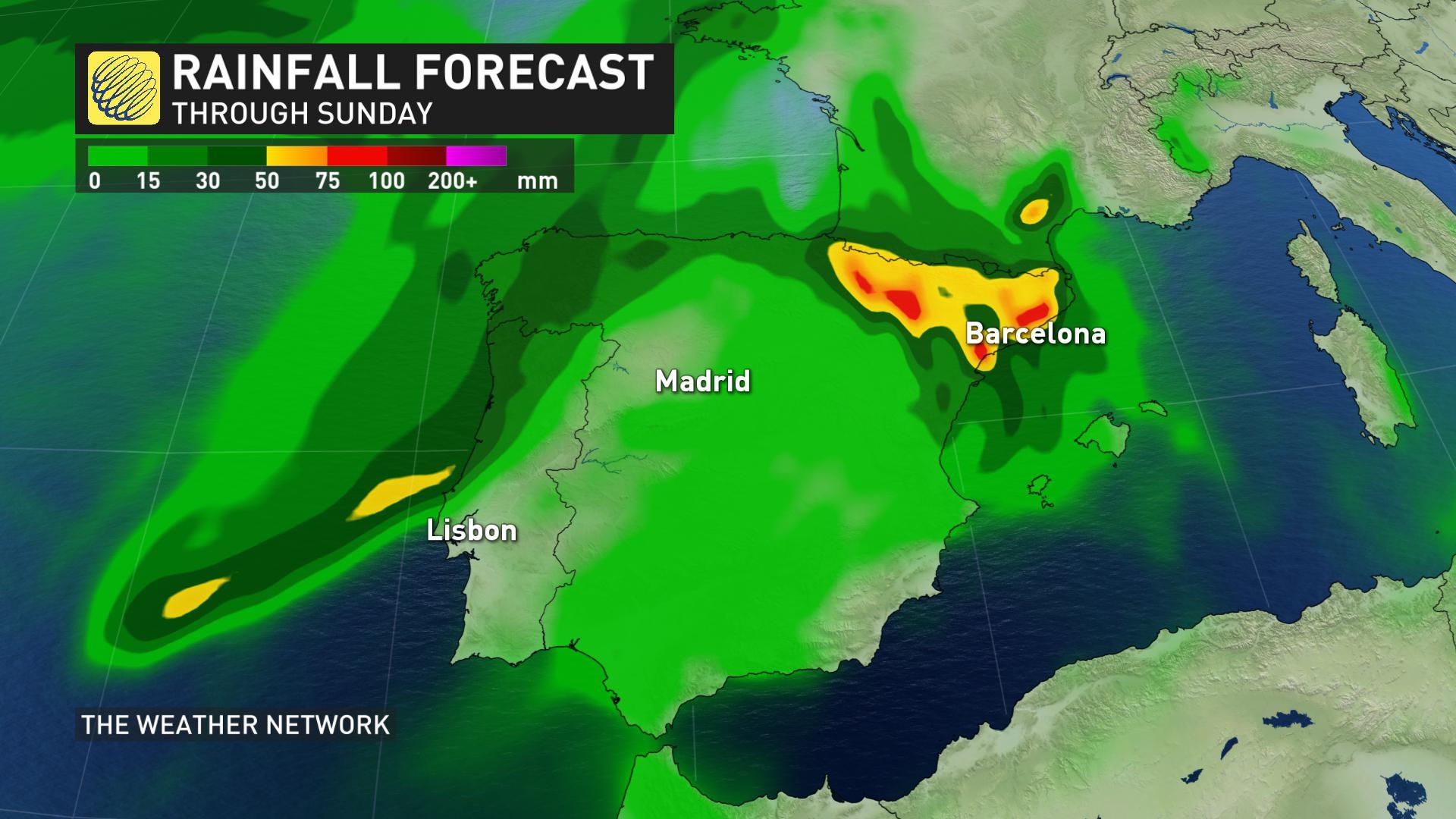 The storm is forecast to weaken quickly after making landfall.

WATCH BELOW: HOW CANADA'S WEATHER PLAYS A ROLE IN THE REST OF THE HURRICANE SEASON