Expired News - Making a cleaner and greener sunscreen - The Weather Network
We use cookies on this site to improve your experience as explained in our Cookie Policy. You can reject cookies by changing your browser settings.   READ MORE I ACCEPT

Making a cleaner and greener sunscreen

Monday, May 7, 2018, 4:51 PM - As the temperatures rise and people swarm to the beach, they slather on sunscreen to protect against the sun’s harmful UV radiation that causes skin cancer. As they splash and swim, few give thought to whether the chemicals in the lotions and sprays are safe for marine organisms such as the fish and corals living in these coastal zones.

The bad news is that mounting evidence suggests that certain chemicals in these radiation filters are bleaching the corals and killing fish. The good news is that there is a greener, cleaner and safer alternative in the works.

The sunscreens widely available belong to two major categories: physical and chemical. Physical sunscreens contain tiny minerals that act as a shield deflecting the sun’s rays. On the other hand, chemical sunscreens use many synthetic compounds that absorb UV light before it reaches the skin.

But these lotions wash off in water. For example, for every 10,000 visitors frolicking in the waves, about 4 kilograms of mineral particles are washed into the beach water each day. These minerals catalyze the production of hydrogen peroxide, a well-known bleaching agent, at a concentration high enough to harm coastal marine organisms. In fact, up to 14,000 tons of sunscreens are released into the water each year. Active ingredients in these sunscreens, minerals and synthetic organic compounds, are putting 10 percent of the global reefs under stress, including 40 percent of coral reefs along the coast.

One of these ingredients is oxybenzone, a synthetic molecule commonly used in chemical sunscreens and known to be toxic to corals, algae, sea urchins, fish and mammals: A single drop of this compound in over 4 million gallons of water is already enough to endanger organisms. Unfortunately, its concentration in coastal water is already significantly higher than its toxic limit, though not yet deadly, and might be accelerating coral bleaching. To save their marine ecosystem from further destruction, legislators in Hawaii passed a new law banning chemical sunscreens containing oxybenzone and another harmful ingredient, octinoxate. The law will take effect January 1, 2021. 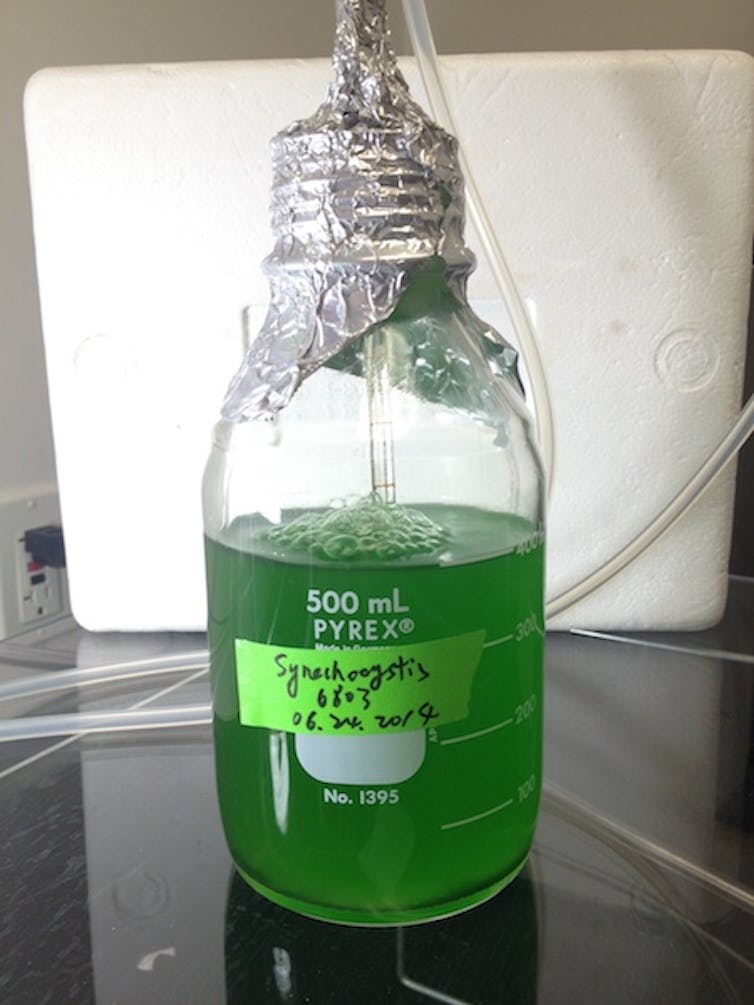 A flask of the cyanobacterium Synechocystis sp. PCC 6803 that was used to produce shinorine. The green color comes from the chlorophyll, which is a natural part of the bacterium. Shinorine is clear. Dr. Guang Yang, CC BY-NC-ND

Protecting ourselves from UV rays is nothing new. Many organisms including microbes, plants and animals have evolved ways to guard themselves. These organisms produce small molecules that absorb UV rays and block radiation from entering cells and damaging the DNA. Unlike physical and synthetic chemical sunscreens, these naturally available compounds are environmentally friendly and biodegradable. As such, these natural products have the potential to be safer compounds for commercial sunscreens.

In my laboratory in the College of Pharmacy at the University of Florida, we are interested in combing the world for naturally occurring chemicals that have applications in health, agriculture and environment. Recently, my colleagues and I have discovered a more efficient way to harvest shinorine – a natural sunscreen produced by microbes called cyanobacteria.

Shinorine belongs to a family of natural products, called mycosporine-like amino acids, and is made up of two amino acids and one sugar. Many aquatic organisms exposed to strong sunlight, like cyanobacteria and macroalgae, produce shinorine and other related compounds to protect themselves from solar radiation. The cosmetics industry is already infusing products with shinorine as a key active ingredient. Commercial supplies of shinorine come from marine red algae that grows slowly in large tidal pools that experience frequent environmental changes. That means that conventional extraction method is time-consuming and unpredictable.

To ramp up shinorine production, we sought a fast-growing strain of cyanobacteria that would thrive under predictable conditions. This took a lot of work! We decoded the genetic blueprints – genomes – of more than 100 varieties of cyanobacteria from marine and terrestrial ecosystems and selected one, Fischerella sp. PCC9339, to cultivate in the laboratory.

To our delight, after four weeks this strain produced shinorine, but unfortunately not enough. To produce more we then transferred a set of genes that encode the instructions to make shinorine, into one freshwater cyanobacterium (from Berkeley, California), Synechocystis sp. PCC 6803, which grows fast with just water, carbon dioxide and sunlight. Using the engineered cyanobacterium, we produced a quantity of shinorine comparable to the conventional method – but we did it in just a few weeks instead of one year that’s needed to cultivate red algae.

By advancing the method to produce more shinorine and other UV-absorbing natural products, we hope to make “green” sunscreens more available – to protect our skin and the lives of the creatures we are so eager to see.