Expired News - How to detect a sinkhole before it swallows you up - The Weather Network
We use cookies on this site to improve your experience as explained in our Cookie Policy. You can reject cookies by changing your browser settings.   READ MORE I ACCEPT

How to detect a sinkhole before it swallows you up

Wednesday, September 5, 2018, 1:01 PM - It comes as quite a shock when the ground beneath your feet, your house or your field suddenly disappears leaving a hole. This hole may be tens of metres or more deep, and it will eventually lead into a cavity which may extend downwards for hundreds of metres below the ground.

We call these sinkholes, and they are a global problem. Sometimes sinkholes are a purely natural phenomenon, but they may also be associated with previous industrial activities, most commonly mining. So how do scientists like us detect a sinkhole before they appear at the surface?

The geology of the rocks beneath you is a clue to the possibility of sinkholes. Limestone is prone to dissolution by groundwater which can, over time, create enormous networks of underground caves known as karst. These can collapse downwards due to gravity, leading to great surface depressions and subsidence damage and even the complete loss of houses. 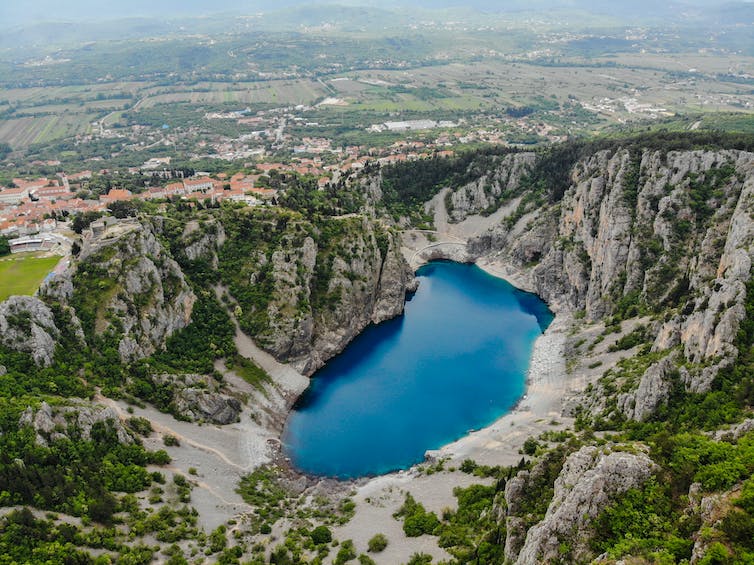 A karst lake in Croatia, probably formed by the collapse of a huge cave.

Poorly mapped and recorded historic mine workings in coal, salt, potash, tin and copper often leave voids in the ground. These voids may eventually come to the surface over time as the roof progressively collapses. These collapses can be gradual, or can happen suddenly, with surface depressions appearing overnight without warning. Such rapid events are often associated with changes in groundwater or during excessive rainfall events.

In a region where all of the surface rocks are limestone, such as Florida or large parts of China, it is difficult to avoid the risk which these pose as there is often little prior warning.

In densely populated areas, such as the UK, a lack of available land is leading to brownfield sites being utilised, often without adequate prior knowledge or ground investigation. Compensation is available for some kinds of collapse, such as coal mining liabilities which are covered by The Coal Authority, but many of the other causes are seen by insurers as “Acts of God” and cover is expensive or difficult to obtain.

We have both worked on the problem of sinkholes everywhere from gold mines in Australia to the Middle East, particularly in Kuwait and the Dead Sea, and the Bahamas. We’ve also been all over the UK and Ireland, looking at mining cavities in South Wales, Yorkshire and the Potteries, and collapses from medieval robbing of chalk for mortar beneath a major road near London.

Over the years, we have become experts in measuring the Earth’s gravity at ultra-high precision to a few parts in a billion. This is known as microgravity. We can use this to detect a cavity, or even a partially-filled area with less density than the surrounding rocks, long before any collapse reaches the surface.

Often, we are called in after the first collapse has occurred to detect all of the other potential sinkholes nearby. Developers need to start thinking about this kind of work before building commences.

An additional innovation we have developed is to carry out what are known as 4-D, time-varying, repeated microgravity surveys at intervals of months to years. This enables us to detect changes in gravity, which suggest that the cavities are propagating towards the surface and potentially becoming unstable. 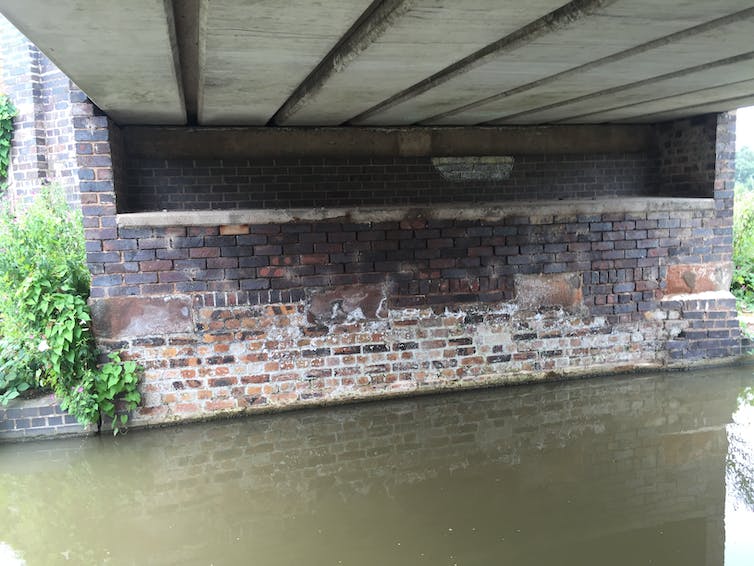 A road bridge over the Trent and Mersey Canal in Marston which has had to be jacked up three times to compensate for ground subsidence.

We have been observing a problematic section of the Trent and Mersey Canal in Cheshire since 2002 and have repeated readings on more or less an annual basis. Over this period, the microgravity results suggest increasing anomalies and that the underlying salt mines which were the reason why the canals were constructed in the first place are becoming less stable. This may be due to leakage from the canals themselves or more frequent intense rainfall as the climate changes.

A recent collapse of a section of the same canal nearby at Middlewich, which caused great disruption and almost led to loss of life, has brought our work into sharp focus. The proposed route of Phase 2 of HS2 is planned to cross a significant portion of this Cheshire Salt Field where subsidence is very common and the engineering challenges for this high-speed line will be considerable. We have contributed to a new Channel 5 series on sinkholes that has covered this issue and our work in some depth. We hope to be able to give guidance on how the area should be fixed and where this technique might be utilised to map other vulnerable areas along this network of waterways. After all, it is possible to do something about sinkholes – if they can be detected in time.