Expired News - How globalisation spreads infectious diseases - The Weather Network
We use cookies on this site to improve your experience as explained in our Cookie Policy. You can reject cookies by changing your browser settings.   READ MORE I ACCEPT

Friday, October 26, 2018, 3:42 PM - These days we can get from most remote villages anywhere to home in 36 hours. And migrating humans can certainly carry microbial “passengers”. This means the increasing globalisation of our world can give infectious diseases a good opportunity to spread.

In the age of exploration, introduced infections played a major role in shaping human history. Although the origins of the 1918 Spanish Flu pandemic are hotly debated, the timing of its onset in Europe coincided with mass troop movements towards the end of the first world war. It probably came with American troops from Camp Funston in Kansas.

More recently, it’s thought HIV/AIDS emerged early in the 20th century, but only in the 1960s did it spread along transport routes in Africa.

Developed countries, particularly those like Australia that are geographically isolated, often feel relatively protected from epidemics. But travellers have introduced cases of Ebola to the US and Europe, brought SARS from Asia to Canada, and MERS coronavirus from Saudi Arabia to South Korea. Recent studies have highlighted the risk of importation of antibiotic-resistant bacteria from countries where resistance is more common.

The impact of globalisation is much more complex than simply travel, however. A World Health Organisation report nominated several factors that can worsen the spread of infectious diseases. These include changes to the environment, demography, economy and technology.

The impact of humans on the environment can change the risks of infectious diseases in several ways. Climate change can affect the prevalence of disease-transmitting insect vectors (such as mosquitoes, which often thrive in warmer temperatures) and sea surface temperatures, which have been associated with disease outbreaks such as cholera as warmer oceans allow germs to thrive.

The encroachment of humans into animal habitats can result in the exposure of humans to new diseases, known as “zoonoses”. This is thought to be how HIV crossed over from being a disease of primates to infect humans. Other diseases that have originated from contact with animals and their environments include SARS (from bats via civet cats in southern China), Hendra virus (via bats to humans and horses) and Nipah virus (again bats to humans and pigs). 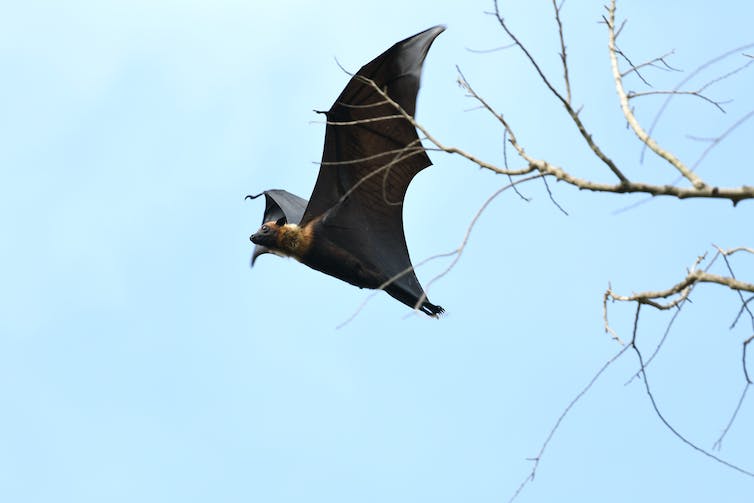 Humans have contracted diseases (such as SARS and Hendra virus) from bats. www.shutterstock.com

In addition to the increase in population mobility, other diseases can spread as a result of demographic changes. This includes increasing urbanisation. It has resulted in an increase in dengue (as the mosquito vector is most common in cities), but a possible decrease in malaria (partly because of the lack of freshwater breeding sites for the malaria-transmitting mosquito).

And conflict can disrupt public health infrastructure, including clean water, sanitation and immununisation programs. This can result in disease outbreaks among refugees and internally displaced persons. Crowded conditions are also associated with more intense transmission of infections such as tuberculosis.

THE ECONOMY AND INFECTIOUS DISEASES

Economic changes have mixed effects on infectious diseases. Increasing national wealth is generally associated with a shift from infectious diseases to non-communicable diseases (such as diabetes and heart disease). This complex phenomenon is known as the “epidemiological transition” where better sanitation and medical care lead to longer life and thus more diseases of ageing and injuries.

Lengthening supply chains of food products can result in international outbreaks, such as hepatitis A related to frozen berries from China.

Some antibiotic resistance is related to antibiotic use in animals. This is often required because of the industrialisation of food production.

“Medical tourists” – travellers from developed countries who take advantage of cheap, high-standard medical care in middle-income countries – may be at risk of antibiotic-resistant infections. This concept was unheard of even 30-40 years ago.

Global supply chains in pharmaceuticals have enabled cheaper access to many drugs, including antibiotics. But this has led to global shortages of some antibiotics. Recent damage to manufacturing facilities in Puerto Rico resulted in drug shortages in the United States.

Poor-quality drugs and poor prescribing practices where drug regulation standards are lax can mean bacteria are exposed to low concentrations of antibiotics. This means some bacteria don’t die and thus learn how to evade the drugs. Additionally, counterfeit pharmaceuticals are sometimes spiked with just sufficient amounts of antibiotics to pass detection assays.

Technological change has also had mixed impacts on the prevalence of diseases and how they spread. Although the speed of air travel poses many risks, we now have many better tools for disease surveillance and analysis.

Examples include the monitoring of infectious disease outbreaks by independent organizations such as the International Society for Infectious Diseases, which operates the “rumour desk” website Promed-Mail. And organisations such as the ECDC regularly publish risk assessments of emerging infections.

Improvements in gene analysis and computer hardware allow us to pinpoint the origins of many pathogens, including Ebola, influenza, measles, food-borne infections and antibiotic-resistant bacteria. More importantly, genomic analyses can enable rapid recognition and control of outbreaks.

The potential now exists to augment traditional disease surveillance with new sources. In theory, compliance with quarantine could be verified on social media, or the source of legionella outbreaks could be narrowed using mobile phone geo-locations.

But similar to the debate over surveillance technologies for national security, we need to explore the ethical implications of these new technologies first.

VIDEO: HOW THE FLU CAN TURN DEADLY