Expired News - Humid summer days are compounding our smog problems - The Weather Network
We use cookies on this site to improve your experience as explained in our Cookie Policy. You can reject cookies by changing your browser settings.   READ MORE I ACCEPT

Sunday, June 17, 2018, 2:42 PM - Muggy, humid weather is bad enough for our comfort level on hot summer days, but did you know that it can actually make the air quality worse, raising our risk of health impacts due to air pollution?

As the old saying goes, it's not the heat, it's the humidity.

Well, in the case of air quality, it's actually both. Hot summer days can give rise to worsening air quality due to smog, especially when winds are calm. Add humidity to the mix, though, and conditions get even worse. Not only are we uncomfortable due to the muggy air, but that added moisture can actually make smoggy conditions even worse, resulting in some potentially serious risks to our health.

Smog, which is short for 'photochemical smog', is primarily made up of the combination of two major components.

The first is ground-level ozone. This is the same molecule (O3) that forms the protective 'ozone layer', high up in the stratosphere, which absorbs the more harmful types of ultraviolet radiation from the Sun. At ground-level, though, where we can breathe ozone in, this molecule acts as a lung irritant, resulting in shortness of breath, coughing, a greater susceptibility to lung infections, and a reduced ability for the lungs to protect us from microbes, dust, smoke particles and other potentially harmful substances we breathe in.

Ozone is considered a 'photochemical' because it forms when nitrogen oxide pollution (nitric oxide (NO) and nitrogen dioxide (NO2), both from the burning of fossil fuels) reacts, in the presence of sunlight, with chemicals known as 'volatile organic compounds' (from oil and gas production, solvent and fuel evaporation, burning wood, and even naturally from coniferous trees). 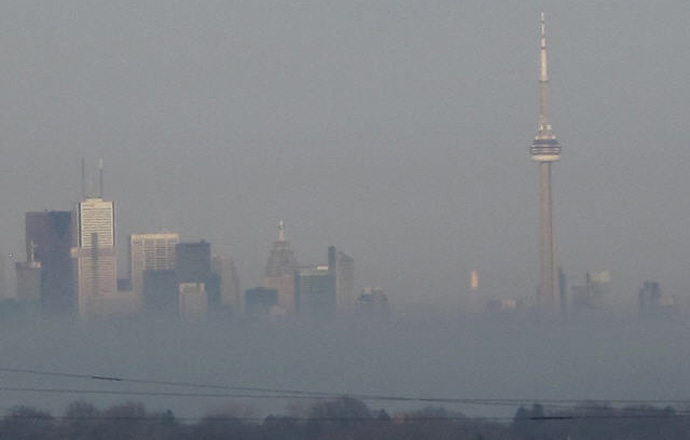 Smog blankets the City of Toronto.

The second component is fine particulate matter. These tiny bits of matter, up to about 2.5 microns in size, can be made up of dust, ash, smoke or pollen, or tiny aerosol droplets of sulphate and nitrate chemicals, all of which are small enough to easily get past our natural defenses, and thus be breathed deep into the lungs. On their own, these 'respirable particles' can cause obstruction of the lung tissues, resulting in difficulty breathing.

When the effects of both ozone and fine particulate matter are combined, when a region is blanked with smog, the overall impact on our health can be very harmful, especially to those who already suffer from cardiovascular and/or respiratory diseases, possibly resulting in hospitalization and even premature death.

Although there is the potential for smog to form at any time of the year, it is mainly seen as a summer problem, since that is when we're more likely to see high concentrations of both ozone and fine particulate matter, together.

There's a couple of reasons for this - mainly the weather conditions, and the angle of the Sun in our sky.

In the cooler months, smog episodes are usually due to high concentrations of fine particulate matter. There may be some ozone in the mix, but concentrations will tend to be low, because - due to the angle of the Sun at this time of the year - the sunlight reaching the ground doesn't tend to have enough energy to drive the chemical reactions that produce ground-level ozone. Fine particulate matter concentrations can rise significantly, though, any time there are weather conditions that limit the how far away pollutants can travel from their source, and how high they can rise into the air.

For example, when there is a temperature inversion - warm air resting atop a layer of cooler air near the ground - this limits the volume of air that pollutants have to mix into over an area (such as a city). As more pollutants are added throughout the day to that limited volume, the concentration increases, and the only sources of relief are if the inversion breaks, providing a larger volume for the pollution to mix into, or something like a weather front sweeps through, to push the polluted air away and usher in different conditions.

Meanwhile, in the warmer months - May through September, usually - ground-level ozone becomes the primary concern during smog episodes. Although the same particle pollutants can be present in summer as were there in winter, in the same amounts, warmer summer temperatures usually result in a deeper boundary layer, and thus a larger volume of air for the particle pollution to mix into. If the same amount of pollutants is present as was seen in winter, the larger volume of air results in lower concentrations, and overall lower health impacts.

Ozone, however, can reach much higher concentrations in warmer months, than are typically seen during the rest of the year. This is due to the more intense sunlight that reaches the ground. Since these photons passes through the atmosphere at a steeper angle to the ground, they have more than enough energy to drive the photochemical reactions that produce ground-level ozone.

Watch below as the tilt of the Earth and our path around the Sun produces the four seasons.


So, we have fine particulate matter as the bigger problem for winter smog, and ground-level ozone as the primary concern for summer smog. We haven't accounted for one last factor, though.

One of the simple truths in meteorology is: warmer air can hold more water vapour.

Relative humidity may reach the same levels in both summer and winter, even reaching up to 100 per cent saturated. Relative humidity, though, is simply a measure of how much water the air is holding at any time, compared to how much it can hold. How much water the air can hold, though, depends on the air's temperature. Compare two saturated parcels of air, both at 100 per cent relative humidity, with one at 30°C and the other at -10°C. Due to the higher temperature, the warmer parcel will contain over 15 times more water vapour than the colder one!

High relative humidity during the summer already puts stress on our bodies. When we're out in the summer heat, our bodies attempt to cool down by sweating, but this method is only effective as long as the relative humidity is low enough that the sweat evaporates. With higher humidity, the sweat lingers. At best, it makes for a sticky, uncomfortable time and likely a very poor night's sleep. At its worst, it can lead to heat stress, heat exhaustion, and even heat stroke.

The greater amount of moisture in the air during the summer also has a direct impact on air quality, though.

The muggy haze of humid weather lingers in the air in this photo, submitted to our UGC gallery.

So, while ozone is usually the primary concern for summer smog, due to the more intense sunshine, whenever humidity values start to climb, fine particulate matter concentrations rise, as well.

This can easily aggravate summer air quality, producing more smog episodes. On any day when we have 'moderate risk', due to ozone, on Canada's air quality health index (AQHI), adding significant concentrations of particulate matter can push the AQHI rating into the 'high risk' category, or even worse. Thus, simply by adding humidity to the mix, any summer can experience more smog episodes, compared to if we had seen drier conditions.

It's not just the number of episodes. As Akhtar indicates, the addition of more particulate matter can actually make an individual smog episode persist longer, which means more exposure for us.

According to Akhtar, higher humidity can actually make some types of air pollution even worse. While the added water vapour favours the formation of sulphate aerosols, pollutants such as sulphur dioxide can combine with water vapour to form sulphuric acid.

It's not just an outdoor thing

Inside our homes, higher humidity causes the growth of microscopic organisms, such as mold and mildew, she says.

"Dust mites and all sorts of bacteria also thrive in a humid environment," Akhtar added, while recommending that humidity levels in the home be kept somewhere between 30 to 50 per cent.

One way she recommends to alleviate poor air quality in the home is to open your windows, to let fresh air in, during days when outdoor air quality levels are good.

Although it's difficult to completely avoid exposure during smog episodes, there are some ways that we can protect ourselves.

• Avoid strenuous outdoor physical activities during these times. If it is not possible to avoid, reduce the length of the time or the intensity of the activities
• If outdoor air pollution levels are high, keep your windows and doors closed, to keep pollutants out
• Consider using a High Efficiency Particulate Air (HEPA) filter in air conditioners, air cleaners and vacuums to remove particles
• Know how air pollution affects your health, and by checking the Air Quality Health Index (AQHI) on a regular basis find out what the health risks from air pollution are in your community.

Click or tap on the Air Quality link from your city page on theweathernetwork.com/ca, or from your Weather Network app, to keep track of the AQHI readings in your community. To learn more about how air pollution can affect your health, visit airhealth.ca.

Editor's note: A previous version of this article mentioned "nitrogen oxide pollution" without clarifying that this included both nitric oxide (NO) and nitrogen dioxide (NO2). This has been corrected. We apologize for any confusion.

Watch Below: India smog from 2017 was comparable to smoking 44 packs of cigarettes a day!