Expired News - Higher risks from hurricanes, typhoons shifting away from the tropics, says study - The Weather Network
We use cookies on this site to improve your experience as explained in our Cookie Policy. You can reject cookies by changing your browser settings.   READ MORE I ACCEPT

Higher risks from hurricanes, typhoons shifting away from the tropics, says study

Wednesday, May 14, 2014, 4:25 PM - According to a new study, the point at which hurricanes and typhoons reach their maximum intensity has been shifting further away from the tropics over the past few decades, which is also shifting the regions of highest risk from these dangerous storms.

Tropical storms, hurricanes and typhoons (collectively known as 'tropical cyclones'), while never exactly alike, tend to follow a general pattern. They spawn in the tropics and migrate towards the poles, while gaining strength over warm water, reaching some maximum intensity and then either dissipating when they make landfall or when they move over colder waters in the north. Exactly when and where one of these storm forms will determine how powerful it will get and where it will end up going, as it draws strength from the ocean waters underneath it and is influenced by the surrounding weather patterns. Typically, the most intense of these storms have impacted on regions closer to the tropics, bringing with them a higher risk. For example, for tropical storms and hurricanes in the north Atlantic, the highest risk regions are in the Caribbean, the coastlines of the Gulf of Mexico, and along the Atlantic coast of the southeastern United States. Regions further north along the coast and into Atlantic Canada tend to experience less intense storms, and therefore have a lower risk. 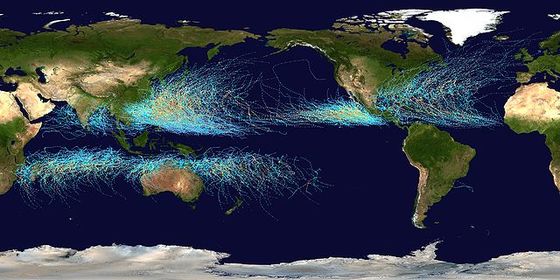 However, according to new research, this is changing.

"Historical intensity estimates can be very inconsistent over time, but the location where a tropical cyclone reaches its maximum intensity is a more reliable value and less likely to be influenced by data discrepancies or uncertainties," said study lead Jim Kossin, a researcher from the U.S. National Climatic Data Center, according to a NOAA press release.

After gathering together data from the past 30 years on tropical cyclones from all around the world, Kossin, who works at the University of Wisconsin-Madison, along with colleagues at MIT and Princeton University, have uncovered a pattern of shifting intensities for these powerful and dangerous storms. In a study published in the journal Nature, the team describes how the regions where these storms tend to reach their peak strength are migrating away from the tropics, by around 53 kilometres per decade in the northern hemisphere and just over 60 kilometres per decade in the southern hemisphere. It also varies by region. While the regions of peak intensities for storms in the Atlantic Ocean have stayed relatively the same over the 30 year period, the greatest shifts have been in the northern and southern Pacific Ocean, and in the Indian Ocean.

The reasons for the observed shift in intensities aren't entirely clear at the moment, but the researchers do have some ideas about what might be behind it.

"The rate at which tropical cyclones are moving toward the poles is consistent with the observed rates of tropical expansion," Kossin said in the statement. "The expansion of the tropics appears to be influencing the environmental factors that control tropical cyclone formation and intensification, which is apparently driving their migration toward the poles."

With the poleward migration of the intensities of these storms, the risks posed by them are moving as well.

Regions closer to the tropics, in both hemispheres, are seeing risks fall, while the risks shift further north in the northern hemisphere and further south in the southern hemisphere. This will expose people living further away from the tropics to a higher potential for storm damages, flooding and other impacts that they've generally avoided up until now. The lower risk for the deep tropics will mean an easier time in those regions, with generally fewer damaging storms. However according to Kossin, there will be a down-side to this, as the lower rainfall amounts that will come with it may result in water shortages for people living closer to the equator.

More research is needed to pin down the exact reasons for the trend shown in this study, but according to study co-author Kerry Emanuel, a professor of meteorology from MIT, it may come down to the warming oceans. The band of ocean with surface temperatures between about 27-30 degrees C are ideal for generating these storms, he said in an MIT news release, "and as that belt migrates poleward, which surely it must as the whole ocean warms, the tropical cyclone genesis regions might just move with it."

Michael Mann, a professor of meteorology who heads up the University of Pennsylvania's Earth System Science Center, who was not involved in the research, also commented in the MIT release: "The findings seem quite plausible. We know that human-caused climate change is leading to a poleward shift in certain features of the atmospheric circulation. … It would be surprising if these shifts were not influencing tropical cyclones. This study shows that they are, by causing a poleward migration in the zones where atmospheric shear is either favourable or prohibitive to tropical cyclone formation."