Expired News - Remember that huge West Coast blob? Well, El Niño killed it - The Weather Network
We use cookies on this site to improve your experience as explained in our Cookie Policy. You can reject cookies by changing your browser settings.   READ MORE I ACCEPT

News
Editor's Choice
Indigenous Constellations: Art, science, and all-important
What ever happened to 'the blob' off the B.C. coast?

Wednesday, February 17, 2016, 1:11 PM - Remember that "blob" that's been lurking off the west coast of North America over the past couple of years? NASA says it's likely dead, and El Niño did the deed.

The patch of unusually warm water off the West Coast, stretching from Alaska to Mexico's Baja California peninsula, appeared as an unusually strong high pressure system parked itself over the region.

Such "ridges" are common enough in the region, but this one was so persistent that it kept out stronger winds for months and months. 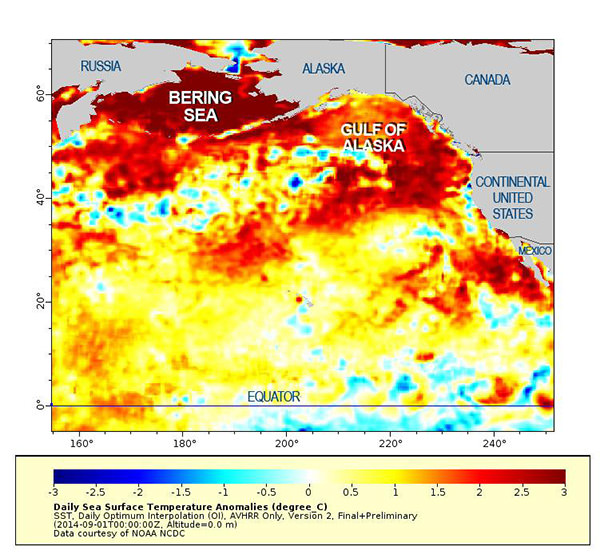 The trouble is, wind action churns up the sea enough that deeper, cooler water wells up closer to the surface. Phytoplankton, the bottom rung of the ocean food chain, thrive in cooler waters, and in their absence, phytoplankton levels dropped dramatically. That led to a knock-on effect, meaning fewer fish and fewer of their predators like sea lions.

Weatherwise, the blob is believed to have had a major impact on Canada's weather in the past two years.

The B.C. Interior saw a marked decrease of snow during that winter, and the blob's effects had an impact on Atlantic Canada, whose weather last winter was famously brutal. It's also believed to have factored into California's ongoing drought and, conversely, fuelled wildfires in western parts of the continent that saw lower winter precipitation.

And now, it seems, the blob is no more, or at least, is smaller than it was, confirmed by NASA satellites. Here's what average sea temperatures looked like for the month of July 2015: Below is what ocean temperature averages looked like by January of this year: Both images are derived from data collected by the U.S. navy’s Coriolis satellite and Japan’s GCOM-W satellite.

"Beginning in November 2015, strong winds blowing south from Alaska began to pick up, and sea surface temperatures in the northeastern Pacific began to cool," NASA wrote when it published the images its Earth Observatory website.

However, some of its affects on sea life may linger, and Nicholas Bond, a University of Washington meteorologist who first named the anomaly "the blob," says temperatures will take awhile to return to normal.

"There are significant temperature anomalies extending down to a depth of about 300 meters," he told NASA. "So while the weather patterns the past few months have not been that favorable to warming, it will take a while for all of the accumulated heat to go away."