Expired News - Got your hands on a meteorite? Here's how to know for sure! - The Weather Network
We use cookies on this site to improve your experience as explained in our Cookie Policy. You can reject cookies by changing your browser settings.   READ MORE I ACCEPT

News
Editor's Choice
Outsmart mosquitoes with one simple move
OUT OF THIS WORLD | Earth, Space and Everything In-Between - a daily journey through weather, space and science with meteorologist/science writer Scott Sutherland

Got your hands on a meteorite? Here's how to know for sure!

Monday, January 28, 2019, 9:30 AM - A blaze of light flashes through the darkness, flaring so brightly that, for just a few moments, night becomes like day. Finding the object behind this brilliant display may reveal answers to mysteries about the birth of our solar system, or could provide us with even deeper questions to be answered. Here's your guide to meteorites, and everything you need to know to identify them.

• Rocks in space are known meteoroids (larger ones are usually called asteroids)
• When a meteoroid enters the atmosphere, it produces a streak of light across the sky, called a meteor
• Larger meteoroids produce a bright fireball, or can even explode as a bolide
• Any piece of a meteoroid or asteroid that hits the ground is called a meteorite
• There are three basic kinds of meteorites - iron, stony, and stony-iron
• Most meteorites contain some of the earliest minerals to form in our solar system, over 4.5 billion years ago
• Some meteorites are even from Mars or the Moon!

We have a few prominent meteor showers each year, as well as several minor ones that may or may not be noticed, depending on the phase of the Moon and the local light pollution. Occasionally, there's an exceptionally bright meteor that flashes through our sky, and perhaps once a century, we witness something much bigger - such as the object that exploded over Chelyabinsk, Russia in February 2013.

Based on careful surveys, it is now estimated that, on any particular day, anywhere from 5 to 300 metric tons of cosmic rock and ice (aka meteoroids) plunge into Earth's atmosphere, all travelling at anywhere from 40,000 to 256,000 kilometres per hour when they hit the top of the atmosphere.

If we were able to capture a day's worth of accumulated meteoroids, before they flashed through the sky, we would find that most would be microscopic dust grains and ice crystals. Mixed in with all of that microscopic matter would be some larger bits, and the larger the size, the fewer samples there'd be, with ones that get up over a metre in size being quite rare. Even larger meteoroids produce very bright meteors, which are called fireballs, or bolides if the meteoroid explodes, and these are the ones where pieces are likely to survive all the way to the ground, to become meteorites.


So, here are the three basic kinds of meteorites. It's perhaps the stony ones that can tell us the most about the history of our solar system.


According to Nicklin, this large stony meteorite is a chondrite meteorite, named for the tiny, rounded mineral granules - known as chondrules - that surround the ancient calcium aluminum inclusions (CAI) he talks about here. 
One of these meteorites, which Nicklin talks about here, is actually very likely from a well-known object in our solar system - the second largest asteroid in the asteroid belt, 4 Vesta!

Of course, that's a very specific claim: that this particular olivine diogenite meteorite is from asteroid Vesta, as opposed to another of the thousands and thousands of asteroids and meteoroids that exist out in our solar system.

So, how can we be sure - even just reasonably sure - that this meteorite was once a part of Vesta?

Thus, while it's possible that this meteorite could be from a different, but similar asteroid, all the evidence currently points to Vesta.


The dark Tissint meteorite that he shows us is just one piece of a larger meteorite that fell to Earth in the Moroccan desert, exploding into multiple pieces in the process, on July 18, 2011. Although Mars looks reddish orange to us in images, this is due to the oxidized dust ("rust dust") that covers everything there. Wipe that dust off, as NASA's Curiosity rover has done, and you see the gray Martian basalt rock that is revealed beneath the Tissint meteorite's black fusion crust. 
Although all meteorites are fascinating in their own right, and can hold important clues regarding the formation of our solar system, some are also exceptionally beautiful, such as these stony-iron "Pallasite" meteorites.

HERE'S HOW TO IDENTIFY A METEORITE


For all the meteorites out there to be found, there are even more meteor-wrongs, which is the joking name for any rock that may have been thought to be a meteorite, but upon examination, turned out to be just a normal terrestrial rock.


So, now that you've read about meteorites and learned about them from these amazing ROM scientists, what do you do if you've found an interesting rock, tested it, and you think that it really is a meteorite?

The Royal Ontario Museum hosts Rock, Gem, Mineral, Fossil, and Meteorite Identification Clinics, for just this purpose! In 2019, these are scheduled on February 20, April 17, June 19, August 21, October 16, December 11, from 4 to 5:30 pm, in the ROM's School Groups lunchroom, just inside the President’s Choice School Entrance (around the back, near the Museum Station entrance, on Queen's Park, south of Bloor St W).

UPDATE: THEY'VE HAD THEIR FIRST!

As of 2018, however, they had their very first true meteorite brought in to an Identification Clinic!

This is the Wood River meteorite, brought in by someone from Saskatchewan, whose grandfather had picked up the somewhat unusual looking stone, according to Ian Nicklin. 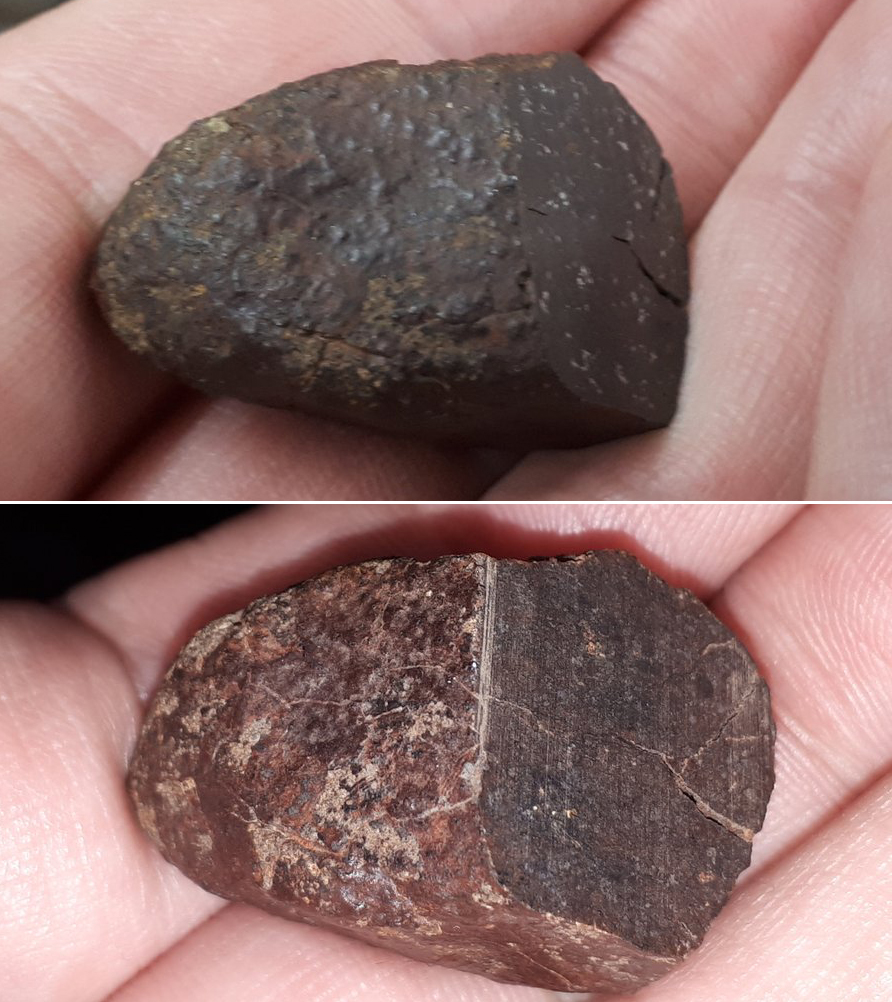 The Wood River Meteorite, at the Royal Ontario Museum, imaged without camera flash (above) and with the flash (below). Credit: Scott Sutherland

As this shows, it doesn't take being a professional to find meteorites (although it can help)!

So, be curious, and check out the interesting rocks that you see around you outside. Test them against what you've learned here, and if you think you've found something, bring it to an expert for confirmation.