Expired News - Climate change is making wine harvests come earlier - The Weather Network
We use cookies on this site to improve your experience as explained in our Cookie Policy. You can reject cookies by changing your browser settings.   READ MORE I ACCEPT

Tuesday, November 20, 2018, 3:46 PM - Wine grapes are one of the most valuable horticultural crops in the world, a globally important industry with commercial vineyards on six continents and all 50 U.S. states. Like many crops, these vineyards, and their grapes, are extremely sensitive to temperature and rainfall during the growing season.

Climate and weather can affect the timing of harvest, the amount of fruit produced and even the ultimate quality of the wine. And with warming from human greenhouse gas emissions already manifesting in many regions, there are concerns about how climate change will affect wine-making and the wine industry in the coming decades.

My colleague Elizabeth Wolkovich of Harvard University and I analyzed 400 years (1600-2007) of data from France and Switzerland to show that climate change is already affecting wine grape harvests. These data are drawn from different historical sources and provide an unparalleled opportunity to look at recent changes compared to a time before the human climate change signal emerged.

Our analysis showed that wine harvests are happening earlier, which has historically been a harbinger of high-quality wines. But we also found that changing local weather conditions could make it harder to determine when to expect high-quality wines, and that higher temperatures could force wine growers to use different grape varieties.

We examined the historical records of harvest dates from many famous wine regions in France, including Bordeaux, Burgundy and the Loire Valley. Then we used reconstructions of climate – temperature, rainfall, soil moisture – from other historical documents and growth patterns in tree rings from the region.

We first noticed a remarkable shift in recent decades toward earlier wine grape harvests. Since 1981, harvests are occurring about 10 days earlier than the average for the last 400 years, with only two years since 1981 occurring late.

This trend toward earlier harvests is caused by recent warming that can be mostly attributed to human emissions of greenhouse gases from burning fossil fuels. Warmer summers mean that the grapes mature and ripen more quickly, translating to harvests that must happen earlier.

Importantly, our analysis also revealed that the way climate is affecting harvests has also been changing. 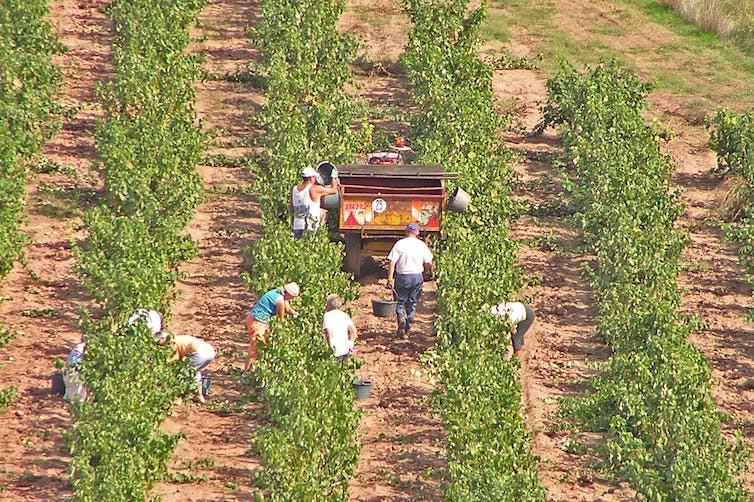 Researchers were able to use hundreds of years of harvest dates to see changes in the start date and recreate climate using tree rings and other data. sam_and_ian/flickr, CC BY-NC

The temperature during the growing season is the single most important driver of fruit ripening, and thus when the harvest begins. But before 1981, you also needed a drought (low rainfall and soil moisture) to get a summer hot enough to cause an early harvest.

If the summer is rainy and the soils are wet, energy absorbed at the surface is mostly used to evaporate water. The process of evaporation takes up heat from the surface and keeps the soils and air near the surface relatively cool.

In contrast, during a drought the soils are dry and the heat from the atmosphere reduces moisture at the surface. Very little evaporation can occur, and the excess heat instead goes into warming up the soils and the air. Dry summers therefore mean hot summers, making it much easier to reach the critical heat thresholds needed for an early ripening and harvest. It’s these conditions that have historically led to higher-quality wines.

Since 1980, however, climate change has made the last several decades significantly warmer in many regions of the world, including Western Europe. This extra heat and warming now means that summers in France and Western Europe can get hot enough to cause an early harvest even without drought conditions.

This shift can be very consequential to wine-growing and wine quality. Early harvests in recent decades no longer mean warm and dry; they can also mean warm and wet. Harvest timing has, effectively, been disconnected from moisture, thanks to global warming.

What does this change to local conditions mean for the wine industry?

Traditionally, in regions like France, early harvests have meant better wines. (In our study, we used rankings from a book that rated French wines in order to control for factors like age since bottling.) But because of the close connection between drought and early harvests, this has meant that higher-quality wines have also been associated with hot and dry summers. Now that early harvests can be wet or dry, drought is no longer a good predictor of wine quality.

Still, thanks in part to these warming-induced trends toward earlier harvests in recent decades, there has also been an overall trend toward increased wine quality, despite the change in drought effects. And we expect, with continued future warming from climate change, for harvest dates to continue advancing. 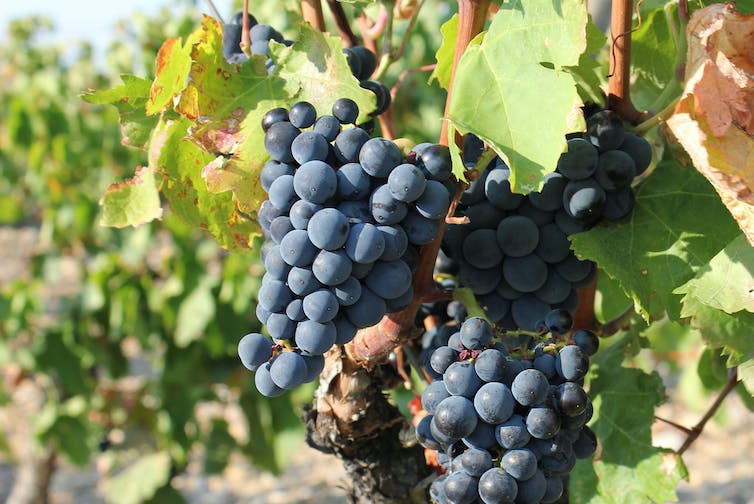 Hot weather has typically led to dry weather, which is has led to high-quality wines in France, but changing patterns from climate change could cause problems for wine growers. hagengraf/flickr, CC BY

There is likely a limit, however, to how much earlier the fruit can mature and the harvest occur and still have this translate to higher-quality wines.

The harvest in 2003 provides a clear example of this. A record-breaking heat wave during this summer caused the earliest harvest in our 400-year record, about one month earlier than average.

But despite such an exceptionally early harvest, this year did not produce especially exceptional wines. With climate change expected to make events like the summer of 2003 – with very early harvest times compared to the historical record – more likely, this extreme year may be a good example of where the region is headed.

As temperatures rise, it suggests there may be some kind of threshold beyond which the continuing advancement of harvest dates is not going to help yield high-quality vintages.

Certainly, the science of viticulture and wine-making involves much more than the weather and climate, and our results do not forecast an inevitable future in which we are doomed to drinking inferior wines.

Wine production and quality depend on many factors, human and natural, including soils, topography, climate and the skill of the wine maker and vineyard manager.

But our results demonstrate that climate change is already affecting harvests, and that previous patterns – with droughts signaling early harvests and high-quality wines – have begun to change in the face of global warming.

What can viticulture actually do about this? Wine growers will need to consider changing their practices to a world that is rapidly moving to a place where the old climate rules may no longer apply.

This article first appeared on TheCoversation.com on March 21, 2016