Expired News - UPDATE: Officials increase Friday's tornado count to SIX - The Weather Network
We use cookies on this site to improve your experience as explained in our Cookie Policy. You can reject cookies by changing your browser settings.   READ MORE I ACCEPT

Wednesday, September 26, 2018, 8:30 AM - In a Tuesday afternoon update issued by Environment Canada, officials confirm that six tornadoes and two downbursts occurred in eastern Ontario and southern Quebec on Friday, September 21. It has also been confirmed that a Kingston, Ontario man lost his life after a tree fell on him during the violent weather. Clean-up and recovery efforts are ongoing, but Wednesday's strengthening storm system  will jeopardize already vulnerable structures from last week's tornado outbreak. More on the impact and storm threat timing, below.

A cold front that tracked over southern Ontario last Friday evening brought severe and rotating thunderstorms to eastern parts of the province.

1.  "A severe thunderstorm produced a downburst in Calabogie near 4:15 pm Friday," says Environment Canada. "A tornado then developed over Calabogie and tracked to White Lake. Several houses have roof damage and many trees were snapped and uprooted. Winds associated with this downburst and EF-1 tornado are estimated to be up to 175 km/h."

"This tornado damaged or destroyed numerous buildings, overturned vehicles and snapped many trees and hydro poles," adds the weather agency. "There were also reports of multiple injuries including, several people that were critically injured."

3.  A third tornado formed shortly after around 6 p.m., which tracked from the Arlington Woods to Greenboro areas in Ottawa. This twister "significantly damaged buildings and snapped trees and hydro poles," says EC.

Officials have given a preliminary high end EF-2 rating to this tornado, with wind speeds up to 220 km/h.


Hi-res satellite imagery comparison before and after the EF3-rated #tornado that devastated much of #Dunrobin, ON on Sept 21st. This is only a portion of the longer track that includes #Kinburn, ON and #Gatineau, QC. We measured a max path width of over 1km yesterday. #onwx #qcwx pic.twitter.com/ziXWeeYYZ1

"Yet another area of damage from a severe thunderstorm was investigated at Sharbot lake," says the weather agency. "A downburst with maximum winds of about 110 km/h knocked down many trees in the area."

1.  In Quebec, Environment Canada has already confirmed the occurrence of an EF-3 tornado that tracked across Dunrobin, Ont., into Gatineau, Que., with wind speeds up to 230 km/h.

2.  A storm investigation team confirmed that the Val-des-Bois area was also hit by an EF-1 tornado around 5 p.m., with wind speeds up to 175 km/h.

"After tracking east-northeastward for about 13 kilometres, the tornado dissipated near the town of Val-des-Bois, where it damaged buildings and snapped trees."

3.  Around 3:30 p.m. local time, a third tornado occurred near the Baskatong Reservoir. About 30 km east of Mont-Laurier, another EF-1 twister "may have tracked approximately 10 kilometres, mainly in Woodlands, crossed the Baskatong Road and dissipated near the Reservoir," says Environment Canada.

4.  "Additionally, satellite pictures allow us to survey the damage caused by a fourth tornado," adds the weather agency. "Located 25 kilometres north of Otter Lake, the path, about 3 kilometres in length, cut through Woodlands. Barring any new information, this tornado will also be confirmed as an EF-1 tornado."

Officials continue to survey the damage to determine the exact tracks of these twisters. Tornadoes of this strength are rare in Canada, especially in September.

According to David Sills, a severe weather scientist with Environment Canada, the Ottawa-area tornado is only the second EF-3 or higher recorded in Canada in September or later. The other occurred in 1898 in the Niagara region. The 2011 Goderich EF-3 tornado was the last recorded in Ontario.

BUILDINGS DAMAGED BEYOND REPAIR ARE STARTING TO BE DEMOLISHED

Several buildings that were damaged beyond repair in Gatineau's Mont-Bleu neighbourhood are already starting to be demolished, while officials say 30 homes in Dunrobin, Ottawa will be flattened as well.

"Housing is our top priority [today] as it was yesterday," said Gatineau Mayor Maxime Pedneaud-Jobin at the support centre on Tuesday morning. "We were happy that more people than expected got into hotel rooms and things look even better for tonight … It's tough to sleep here, there's no [privacy], it's way better for them to have some sort of comfort in a hotel."

A 12-unit apartment on rue Daniel-Johnson is one of the first buildings to get demolished after Friday's storms. Some buildings in the region were destroyed by the extremely strong winds. (Lorian Bélanger/CBC)

There are still two community support centres set up in Ottawa's hardest-hit areas at the Nepean Sportsplex and West Carleton Secondary School. These centres are open from 9 a.m. to 8 p.m. with agencies including Hydro One, the Red Cross and the Insurance Bureau of Canada available to speak with affected residents.

POWER RESTORED FOR THOUSANDS, MOST SCHOOLS AND ROADS ARE OPEN

"This is the worst storm that we have dealt with in the history of Ottawa ... at least since 1998," Joseph Muglia, director of distribution operations for Ottawa Hydro told the CBC, referencing the historic ice storms that hit the region in 1998.

At the height of the storm, 180,000 customers in the Ottawa area were without power with not a single piece of equipment working Friday night as one of the tornadoes touched down near a transformer station. Hydro One investigated how to divert power from a different station to the dark areas of the city, but the workaround hasn't been perfect.

As of Tuesday night, crews had restored power to all but approximately 100 customers, Hydro Ottawa said.


This is the Merivale transformer station. It supplies 60% of the power to the capital region. It was hit directly by the second #ottawatornado which is why the #OttawaOutage has been so long lasting. Damage to the station comparable to that of the infamous 1998 ice storm pic.twitter.com/Lle1tL3unW

Most Ottawa-Gatineau schools and roads are open again, except in the hardest-hit areas with closures still in place on Ottawa's Greenbank Road and Thomas Dolan Parkway.

A LOOK BACK AT THE TERRIFYING MOMENTS

CBC published a heartbreaking interview with James Widder, a resident of the Mont-Bleu neighbourhood in Gatineau, who had to fight to keep his daughter from flying out of his arms when the tornado ripped the roof off their home.


"When it ripped the roof, my daughter ... she went flying up and I'm holding her hand in the air, and I almost let go because she was slipping," Widder says in the emotional clip. 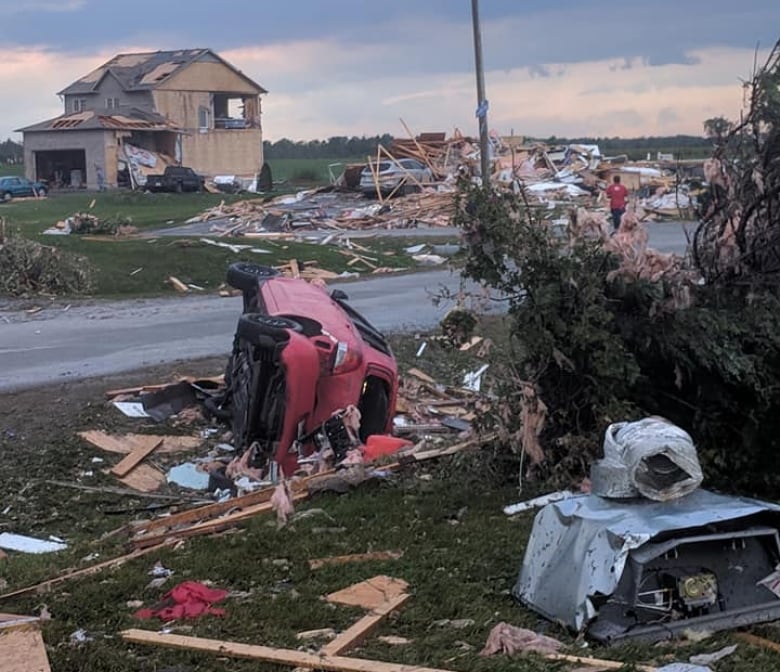 A car was destroyed by the tornado that tore through the capital region Friday. (Nicole Nivotny/CBC)

The storm produced hail the size of golf balls as it began to move toward Arnprior and Fitzroy Harbour, according to social media reports.

HORRIFIC VIDEO OF WOMAN TRAPPED IN CAR DURING TORNADO

Chilling footage of a woman trapped in her car as the tornado roared by has also made its way online.

For the first few seconds of the clip  she can be heard screaming in terror before the sound cuts out. She then turns the camera to her lap, which is covered in storm debris.


Pretty sure we just saw a tornado touch down in Gatineau. Around 5:10 ET. #onstorm @weathernetwork pic.twitter.com/Llx2iQxxo4


Views from Global Affairs! #Tornado sighting across the river in #Gatineau around 5:15pm. Watch for the fire shortly after I zoom in. Hope everyone is ok! #ONStorm pic.twitter.com/Ux1NBRiKUC


Woah. We got quite an office view in #Gatineau of a possible tornado. Hoping everyone is safe. Video (sped up 4x) credit to my colleague @MikeRMcCauley cc: @jesshayden6 @RachelRappaport @bismahhaq pic.twitter.com/j4szV6RHP3


How's the weather where you are?
There are some trees down at Duplex and Alexandre (Yonge and Lawrence area)https://t.co/2kAiSjp6JS #ONstorm pic.twitter.com/VoXUaWcU2G


Tornado just went through Dunrobin, ON about 10 minutes ago. #Onstorm lots of damage. #onwx pic.twitter.com/aOZKy4kJy4


Tornado damage from earlier tonight around 5pm in the Dunrobin, ON area. Just North West of Ottawa. Many roads covered in debris and large trees. Many are in passable. #ONstorm #onwx pic.twitter.com/cf2fZjUASx

BELOW: EXTENSIVE DAMAGE IN GATINEAU STREETS AFTER TORNADO-WARNED STORMS ROLL THROUGH


Horrible images of destruction coming out of Dunrobin, Ontario this evening after a strong tornado passed through. #onstorm https://t.co/Rq0PxsUBqu pic.twitter.com/IWewmTiu1W


My mom sent me a few photos of a bunch of trees down on Arbuckle Cres. Near Greenbank and Hunt Club. #onstorm #ottstorm pic.twitter.com/KtYY7jdJxP


First night in our new house and we have no power! On the plus side, we have candles and the Foo Fighters playing ✌🏻 #onstorm pic.twitter.com/TH1uxopmKF

WATCH BELOW: TERRIFYING FOOTAGE FROM INSIDE THE TORNADO


WATCH BELOW: 'ONE DAY AT A TIME:' RESIDENTS SLOWLY RETURN AFTER DEVASTATING TORNADO

Tornadoes reported in Ontario and Quebec
With files from CBC.ca