Expired News - Long-lost Tom Thomson painting sells for over $480K - The Weather Network
We use cookies on this site to improve your experience as explained in our Cookie Policy. You can reject cookies by changing your browser settings.   READ MORE I ACCEPT

Thursday, May 31, 2018, 3:32 PM - A long-lost painting by Tom Thomson was sold at an art auction in Toronto for $481,250 on Wednesday, marking a reversal of fortune for both the artwork and the Edmonton woman who had the painting in her basement for years.

Sketch for Lake in Algonquin Park was estimated to sell for between $125,000 and $175,000 before an unidentified buyer purchased the work at Heffel Fine Art Auction House.

Glenna Gardiner, who owned the painting, can hardly believe the final selling price.

"It's all been a bit of a fairy tale, to have a painting be famous and then to sell for that much — when it was just collecting dust in my basement," Gardiner said.

The night of the sale has become one of the most memorable evenings in Gardiner's life.

"I've never come into that kind of money. And I never will again."

Gardiner's father, Jack, was given the painting by a minister in Toronto in 1937. For years, while the seven-by-nine inch artwork hung in the family home, he told his daughter it was an authentic Tom Thomson, which she never believed.

"If it was a Tom Thomson and Tom Thomson was famous, what was it doing in our house? It just didn't seem to fit in with a minister's daughter," Gardiner said.

The painting ended up in her basement. A friend told her repeatedly to get it appraised and it became a running joke between the two. She gave the artwork as a gag gift to her friend, who was able to authenticate that it was the real deal.

"Talk about a fantastic friend because she gave it back to me," Gardiner said.

"She said it had been in my family and that's where the money should stay." 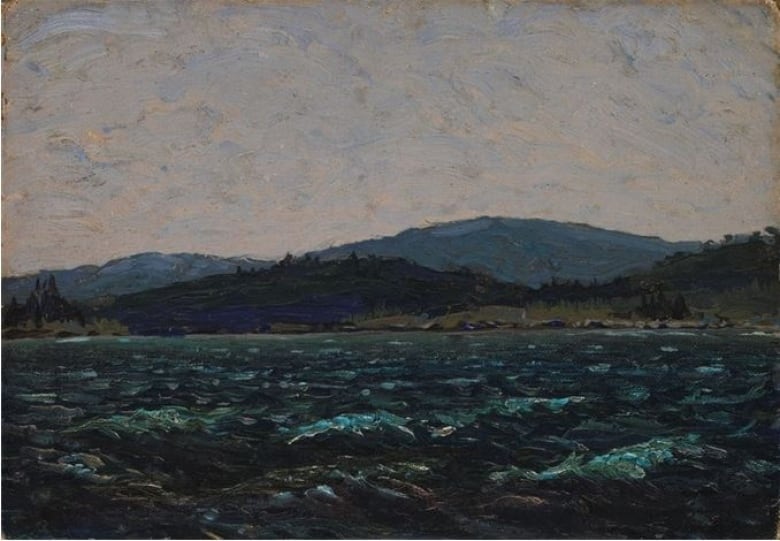 Sketch of Lake in Algonquin Park sold for over $480,000 after being found in a basement months ago. (Heffel Auction/CBC)

Robert Heffel, vice-president of the auction house, called the Thomson painting "very rare to the market" particularly due to Thomson's early death at the age of 39 in 1917.

"They haven't found it in any other artist's [work]."

With the big sale, Gardiner said she is delivering on her promise to the friend who begged to get the painting authenticated — by taking her on a Mediterranean cruise.

"I was just hoping it would sell for enough to pay for the cruise."