Expired News - Bear sightings becoming 'unusually high' for Gatineau - The Weather Network
We use cookies on this site to improve your experience as explained in our Cookie Policy. You can reject cookies by changing your browser settings.   READ MORE I ACCEPT

Tuesday, September 11, 2018, 2:25 PM - It's official — the number of bear sightings in the National Capital Region this year is unusually high.

So far this week, a mother and her cub were spotted Monday around École du Plateau in Gatineau, first on rue de ​l'Atmosphère and then on rue des Conifères.

An email sent to parents said the school contacted police, and that wildlife experts were eventually able to tranquilize the two bears after they climbed up a tree. The bears were then caged and taken out of town for release.

SEE ALSO: What on Earth could live in Mars subsurface salt water lake?

Several other bear sightings were reported to police the same day on chemin Vanier, then on rue Massicotte, and then near Pierre-Janet Hospital on rue Pharand. All the bears disappeared before officers arrived, police said.

It comes after a busy week last week, when police and wildlife officials dealt with two bears within city limits.

A black bear was seen hanging around the Gatineau Hospital on Wednesday (it eventually retreated into the woods) and then another black bear was spotted wandering around downtown Ottawa's ByWard Market on Thursday (it was tranquilized and released out of town).

'AT LEAST A COUPLE OF SIGHTINGS PER DAY': NCC

Richard Moore, the National Capital Commission's manager of conservation services, said it's been an unusual year for bear sightings.

"We are getting a lot of sightings in the area right now, at least a couple a day," he told CBC Radio's All In A Day. "Usually in a summer, we will get maybe 50 to 60 sightings for black bears in the area, but now we are getting two or three a day."

Moore said the bears are probably coming closer to humans because they're hungry. This summer's weather hasn't good for their normal food supply.

"The warm weather we have had, it dries the fruit much faster and there is less food for black bears," he said. 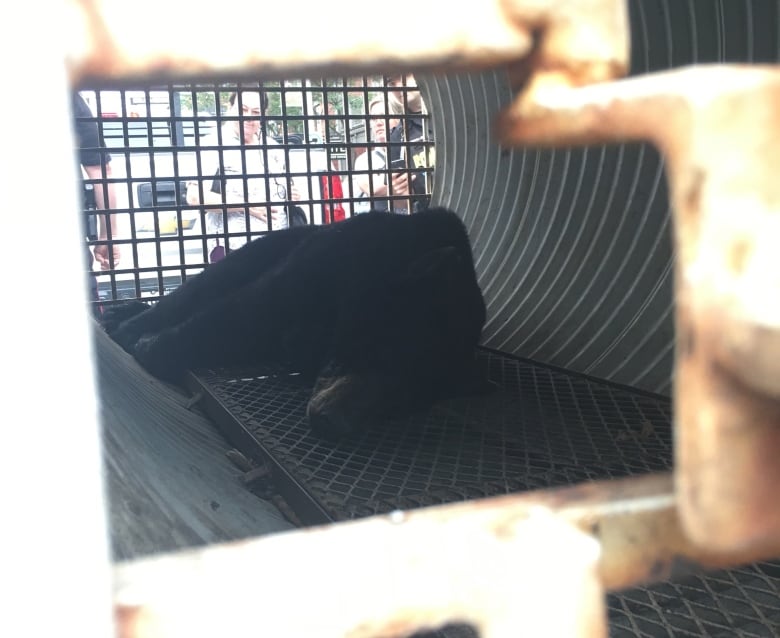 The ByWard Market black bear was tranquilized in a tree and lowered to the ground with a rope, then placed in a cage to be released well outside city limits. (Christian Milette/Radio-Canada)

When reports about a bear on the loose come in, NCC conservation officers will set up a trap and hope the bears follow the smell inside the cage. Once they're captured, the officers take them far out of town for release away from people.

"We have a couple of places that we have set for releasing black bears," Moore said.

Sometimes a trap captures a cub without its mother, or vice versa, but when that happens the other bear stays close. In those cases, officers work to relocate the whole family together.

Moore encourages anyone worried about bears in their backyard to get rid of bird feeders and to keep their garbage inside until pick-up day.

"If you have a black bear that comes around your place, the best thing you can do is take your garbage can inside the garage."

WATCH BELOW: BEAR CLIMBS ON TOP OF POLICE CAR AND REFUSES TO LEAVE