Expired News - No, Mars will NOT appear as big as the Moon this weekend - The Weather Network
We use cookies on this site to improve your experience as explained in our Cookie Policy. You can reject cookies by changing your browser settings.   READ MORE I ACCEPT

News
Editor's Choice
Don’t fall victim to these seven dangerous tornado myths
Is there a day where you can actually levitate off the ground on Earth?
OUT OF THIS WORLD | For Science! - a look at the weird, wonderful and sometimes wacky side of science and technology

No, Mars will NOT appear as big as the Moon this weekend

Friday, August 26, 2016, 11:34 AM - Every August, a persistent myth surfaces in Facebook feeds and email inboxes, claiming that Mars will appear absolutely huge in the night sky, even as big as the Full Moon! Here's the trick to this hoax, along with a few others you may have heard of as well. 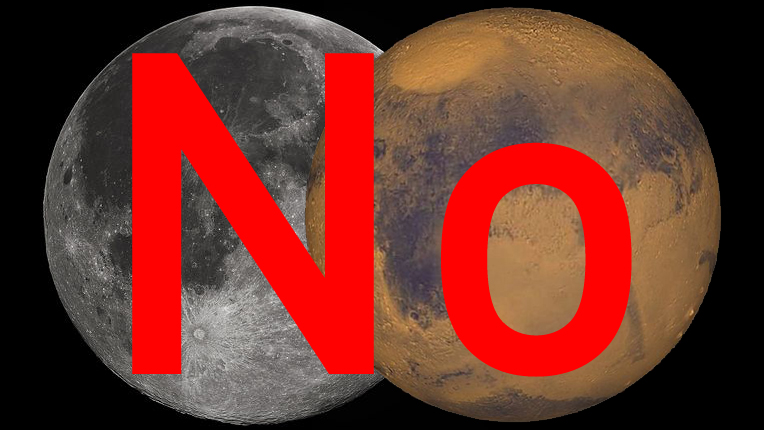 Credits: NASA, with edits by author

Every year, a message - over email, Facebook or other social media - makes the rounds on the internet, claiming that on August 27, the planet Mars will appear as big as the Moon in our sky.

Unfortunately for anyone excited by the prospect of witnessing such an event, there's no truth to this claim.. The planet Mars has never been that big in our sky and never will be.

How can we be certain it isn't going to happen?

First, if Mars were to appear that big to us here on Earth, it would be passing by us at roughly twice the distance to the Moon, or around 70 times closer to Earth than it has ever been in recorded history. That's simply not going to happen unless something cataclysmic happens in the solar system (such as a rogue black hole passing through).

Second, looking at an astronomy program like Solar System Scope reveals the relative positions of Earth and Mars on that date: 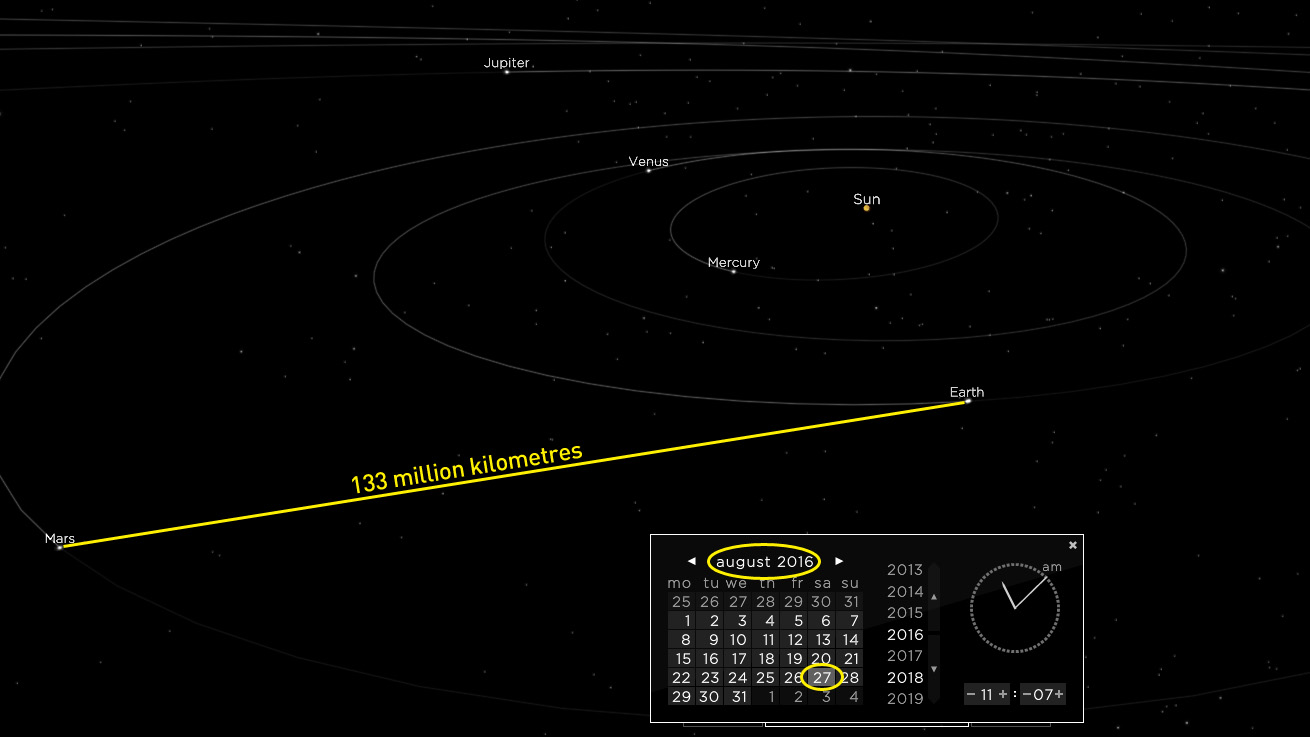 The relative positions of the Sun and all the planets out to Jupiter, on Aug 27, 2016. Credit: SolarSystemScope

As shown in the image above, while Mars and Earth are on the same side of the Sun, currently, they are separated by 133 million kilometres of space!

As amazing as it sounds, while the claim being made over social media is wrong, it is based on a nugget of truth - a spectacular real event that actually did happen on one particular August 27, when the Earth and Mars were the closest they'd been in nearly 60,000 years!

The problem with the claim showing up on our social media feeds, is that the message omits a couple of really important details:

• The real event happened in 2003, and won't repeat until 2287, and
• Even on those two dates, the only way the two objects look to be the same size is if you look at the Moon with the naked eye and Mars through a telescope.

Based on their orbits - 365 days for Earth and 687 days for Mars - the date the two planets reach their closest approach to one another varies from year to year. Thus, the distance between them on that date also varies, usually from between 60 million to 100 million kilometres.

Even the closest distance between the two varies from year to year, due to the shapes of their orbits, and on August 27, 2003, the two planets were only 55,758,118 kilometres apart - the closest they'd come since September 24, 57,617 BC (if our current calendar actually existed then).

Given its persistence now, this hoax may still be showing up, even then, depending on the fate of the internet and civilization.

However, that will be the only time that Mars will look as big as the Moon - again, IF you compare a telescopic view of the Red Planet to your naked-eye view of the Moon.

Update for 2016: Apparently the standard Mars hoax just isn't good enough for some, as new claims have surfaced (mainly on Russian news sites, apparently), that this non-existent close-encounter with Mars has "caused panic in the scientific community," due to the previous close encounter, back in 57,617 BC, having caused "changes in the earth's crust and climatic disasters."

Not only do these claims use the 56 million km distance, which is off by 77 million km from Mars' actual distance from Earth this weekend, but Mars has not caused any changes to Earth's crust or any climatic changes. The gravitational influence of the planet, even at a distance of 56 million km, is so minuscule that it cannot have any noticeable effect on us. If Earth was that fragile, the Moon - with its much stronger gravitational effect - would rip our planet apart (if Earth & the Moon would have even formed under such delicate conditions).

A new message has been circulating over the past few years, detailing what's known as the 'Jovian–Plutonian gravitational effect', which will supposedly allow us to float for a few minutes if we jump into the air at just the right moment on just the right day.

Is this true? Well, not so much. This one is an April Fools Day joke by British astronomer Patrick Moore, based on a supposed alignment of Jupiter and Pluto at 9:47 am on the day in question.

Can we count on this one to keep coming back? Probably, but don't let it fool you. There's two fundamental flaws to this story.

First, Jupiter and Pluto weren't even close to being in alignment with each other and the Earth in 1976, and they haven't been at any time since (look for this to happen in mid-2020).

Second, while it's true that the gravity of every object in the universe has an effect on every other object in the universe, no matter how distant, and while Jupiter is the largest planet in the solar system, its gravitational effect on the people of Earth is extremely small. Adding the even weaker gravitational force from tiny Pluto doesn't help.

If that tiny amount of force was able to counter Earth's gravity, long enough to allow us to float for a few seconds, just think what would happen every time the Moon - which exerts a force over 100 times stronger than what Jupiter and Pluto can manage - went by overhead. Then consider that the Sun exerts a force on us over 18,000 times stronger. Even if it required the special 'alignment' to bring about this effect, if the Jovian-Plutonian gravitational effect was real, the March 20 solar eclipse would have ripped us all off the planet!

Good thing the Earth exerts a force on us that's over 30 million times stronger, to keep our feet firmly on the ground.

Balancing Eggs on the Equinox

Speaking of March 20, have you heard that at the very moment of the equinox, you can balance an egg on its end? Well, this one is actually true!

Go ahead, give it a try! Don't worry about timing it exactly, though. The universe is pretty forgiving about this one. In fact, look to the right.

These two eggs were balanced on the morning of March 24th (the first at 10 am, and the second joined it at 11 am).

Okay, the real thing about this is that there's no need to time it at all. Balancing eggs on their end has nothing to do with the equinox. You can do it at any time, on any day of the year. You just need to find eggs that are bumpy on the end, work with a good solid surface and have steady hands. Add in some patience and you will soon have balanced eggs.

Give it a try, maybe on Zero-G Day!

These hoaxes are pretty harmless, overall, so what's the problem with spreading them?

Phil Plait, of the Bad Astronomy blog, expressed the problem rather eloquently back in 2013:

"I generally have no problems with good-natured pranks on the 'Net, but this one is tiresome at best and is damaging at worst. Why?
Because people believe and then go outside to find Mars. They’ll be disappointed, which is just about the worst emotion I want people to feel about astronomy! I remember back in 2003, when this all started, astronomy clubs and observatories were packed on the fated night as people lined up for blocks to see Mars. Thing was, even at best Mars isn’t terribly big through a small telescope; it’s not a large planet, and it’s a long way off. If people are expecting to see it like the Earth seen from low orbit, they won’t be happy. I had a lot of people tell me exactly that, too.
And since folks aren’t all that familiar with the sky, they fall for this prank year after year. I know there are bigger things in the world (and Universe) to worry about, but this bugs me. We have enough woe and misfortune in the world as it is. Astronomy, the beauty of the sky, and the natural awe laid out before us are instead a source of wonder and joy.
I’d prefer to keep them that way."