Expired News - Spider-nauts? Weird NASA space experiments you must see - The Weather Network
We use cookies on this site to improve your experience as explained in our Cookie Policy. You can reject cookies by changing your browser settings.   READ MORE I ACCEPT

Monday, April 2, 2018, 2:57 PM - All eyes were on the sky this past weekend as China's space station, Tiangong-1, re-entered earth's atmosphere and disintegrated somewhere over the Pacific Ocean.

You might call it an honourable tradition: The U.S.' Skylab space station plunged back into the atmosphere in 1979, and Russia's Mir station did likewise in 2001.

The main purpose of those stations, along with the still-orbital International Space Station, was, of course, space science, which has led to a wide range of inquiry -- even including a few dusty corners of science that, though useful for Mankind, seem a bit bizarre.

Here are five that caught our attention.

So imagine: You’re an astronaut on a space station, doing a really stressful job while hurtling in a claustrophobic metal tube through the most hostile environment known to mankind, when the radio crackles.

“Hey guys,” Mission Control says. “We’re just gonna send you up some spiders. Yes, spiders, those things with the legs and the webs and the bloodsucking. Cool?”

We’re sure the conversation didn’t really go like that (NASA science experiments are scrupulously planned), but we hope the crew aboard Skylab wasn’t finicky about arachnids when two cross spiders, Arabella and Anita, were blasted up into space for a series of student-suggested experiments in 1973:

“Space spiders” sounds horrible, but the science was legit: They wanted to see if the eight-legged passengers could spin webs in zero-G like they do on Earth. In Arabella and Anita’s case, they had trouble doing so. Eventually they succeeded (before dying of dehydration), but the webs’ thickness was uneven.

Apparently “spiders in space” crops up on a lot of NASA science wish-lists, because that duo weren’t remotely the only ones to go into space. A 2008 batch, apparently better cared for than the 1970s pioneers, started out poorly, but soon turned out to be masters of spinning space webs.

In 2011, a pair of golden orb spiders, Gladys and Esmerelda, were monitored in special compartments as they spun webs to capture fruit flies that had been sent up with them. NASA partnered with educators to allow schools to monitor the experiments, with around 130,000 students signed up.

And it seems they don’t even need webs. At the suggestion of a student in Egypt, a pair of jumping spiders, Cleopatra and Nefertiti, were sent up in 2012, and it turns out they had no trouble changing their tactics in zero-G.


Space Spider - 'Cleopatra' lives! Eating the last of her fruit flies, waiting for a ride back to Earth on Dragon-1 pic.twitter.com/exhXg9WZ


We don’t know the fate of Cleopatra, but it seems her companion, Nefertiti, survived the trip back to Earth and adjusted fine to a gravity environment, before dying a couple months shy of the species’ average one-year lifespan.

Fish, and the art of swimming in space

Continuing in the vein of picking a random animal and shooting it into space to see what it does: That same 1973 flight aboard Skylab included a pair of mummichogs, to see how fish can swim in zero gravity.

The short answer: Badly, at least at first. The fish kept “diving,” and ended up spinning round and round in small circles (you can sort of see what that looked like in the first seconds of the grainy old documentary footage below).


However, by week three, they’d more or less figured it out, orienting themselves by turning their backs to available light sources as a substitute for gravity. Fish hatched from eggs sent along on the same mission had no trouble.

That was just the first known experiment. Others would follow, and even recently two crucial tests took place that are key to figuring out how humans adapt to space in the long-term.

First, Japanese researchers sent a special habitat to the International Space Station, then sent up several medaka fish, which are ideal for space-science: They’re translucent, so their bones and organs can be monitored without surgery, and they breed often, so researchers can study generations born on Earth AND in space.

Specifically, they collected data on radiation levels, bone development, muscular atrophy and other stiff challenges faced by astronauts who have to spend large amounts of time in space.

The environment and the experiments were hard on the fish – it seems most of them died.

Not quite fish-related, but still in the aquatic life category, researchers actually studied the development of jellyfish in space recently.

A creature with no bones should have no trouble in zero-g, but whether they’re born in space or on Earth, all jellyfish develop a series of crystals, surrounded by cells, which help them tell up from down. And it turned out jellyfish that grew up in space had serious problems adapting to life on Earth.

That’s big news for humans. We have our own natural gravity sensors, based in our inner ears, and the jellyfish’s hassles are a good indicator of what our own children could face if they are born in space and then have to adjust to a gravity environment when taken to Earth.

NASA is very much a dry operation, with no booze allowed on the International Space Station (with good reason). After a series of allegations of astronauts turning up drunk for launch on two occasions, the agency even revised its rules to ban drinking alcohol less than 12 hours prior to a spaceflight in 2007.

But as the frontiers of space science advanced to cover almost all aspects of the natural world, including nutrition, the subject of space brew has come up on more than one occasion.

For starters, NASA originally planned to produce a kind of sherry suitable for consumption by astronauts aboard Skylab in the 1970s, stored in special packages and limited to four ounces every four days.

That plan didn’t last long. One whiff of the sherry aboard a zero-G test flight aboard NASA’s “vomit comet” aircraft sent passengers and crew scrambling for the barf-bags. It seems space sherry mixed with lingering smells of past weak-belly “accidents” aboard the plane was a bad combination to someone whose stomach was already in free fall. As well, the public backlash to the idea of serious scientists having alcohol in space helped persuade officials to can the project (Russian cosmonauts aboard Mir were apparently allowed a supply of cognac).

But the idea of drinkable alcohol in space has remained alluring, attracting its share of space dollars for researching how it affects the human body in space.

A grad student in Colorado once sent a brewing kit along on a space shuttle flight, which did produce a small quantity of beer. But by the time our relentless pioneer of science sampled the brew, its taste was ruined by the chemicals used in testing.

Even drinking beer in space poses it own challenges. With no gravity, you couldn’t get a head on it, as the carbon dioxide wouldn’t bubble to the surface, and with no gravity, a side-effect of having it in your belly has been diplomatically described as “wet burps.”

Regular beer kegs and pumps wouldn’t work right either, but luckily Dutch scientists developed a special mechanism that would allow beer to be pumped out of a tap (it gathers in tennis-ball sized globs of black gold. The researchers recommend a straw).

RELATED: What hotter or cooler weather means for red and white wine drinkers


If your tastes run a little more high brow, a Scottish distillery sent phials of chemical compounds used in whiskey production to the International Space Station in 2011, and in 2012, the same Dragon space capsule that took those spiders to the station also took yeast and grape juice along for the ride.

After a couple false starts, the students who came up with the idea examined the data and found wine ferments almost three times faster in zero-G.

As it happens, a recent study noted the compound resveratrol, found in red wine, helps counteract the effects of bone density loss from long-term stays in zero-G. Astronauts should have a fun time making that case in front of the NASA brass.

A satellite on the end of a 20-kilometre wire

The thing in the picture below looks like a really big version of tetherball: 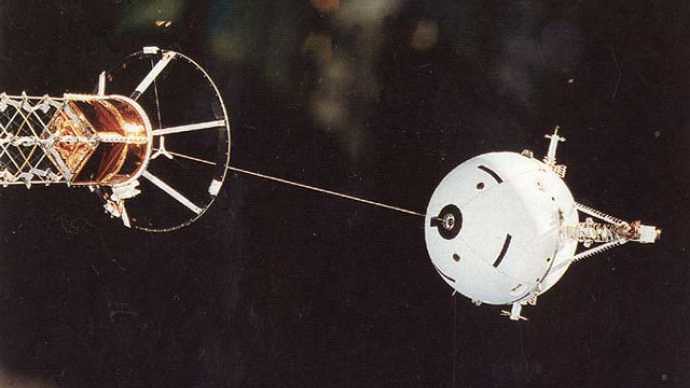 It is, in fact, a space tether. There are different varieties of these, but they all involve deploying some kind of payload on the end of a reinforced, very thin cable, and winding it out away from a spacecraft or planet surface.

This has a lot of benefits, like generating power, shoring up the orbit of space stations and satellites, scattering space radiation and others. An extreme theory involves building one so large, that it can reach from the earth to orbit and function as a space elevator, eliminating the need for rockets to send people and cargo into space.


There are more than a few baby steps between here and there, though, so we’ll focus on just one such project, the Tethered Satellite System.

Flying aboard the space shuttle in the 1996, astronauts deployed a satellite on the end of a 20 km long tether (that’s kilometres, folks, not metres), and flew it like a space-kite through the ionosphere, to measure how much electricity it produces.

It made almost the whole way before it snapped, sending the cable and satellite spinning away from the shuttle. Its crew wasn’t in any danger, but an astronaut on board at the time said the sight was “a big shock” (skip ahead to the 5:20 mark in the video below).

The reason the tether snapped was actually an unwanted side-effect of the experiment’s success. It managed to generate around 3,500 volts of current, but a design flaw in the tether set off a reaction that allowed that current to melt the cable.

They’ll have to remember that for next time. That tether was probably super expensive.

Like its predecessor, Challenger, Space Shuttle Columbia’s mid-air explosion hammered home the potential for disaster in man’s quest for the stars.

Unlike Challenger, which exploded shortly after blasting off, Columbia did make it into space, and carried out a full mission in orbit with a crew of seven before returning home, but the seeds of its destruction were sown during lift-off.

A piece of insulating foam broke off its external fuel tank and punctured the edge of a wing, setting off a chain reaction that caused the ship to disintegrate upon reentry.


All seven astronauts were killed, and the 80 experiments they were bringing back were thought lost as well – until searchers weeks later happened upon a thermos-sized container filled with still-living nematodes.

The nematodes (commonly called roundworms) were just 1 mm across, taken to space so their reproduction and behaviour could be monitored in zero-gravity. Sure, they were in a protective canister, but they were still subjected to speeds of up to 1,000 km/h as they were thrown from a distance of dozens of kilometres above the ground.

The original data from their experimentation was lost in the disaster, but the fact they were even alive at all was a scientific breakthrough. In theory, it suggests life could have travelled between the stars and survived re-entry, perhaps in the heart of a meteor fragment, without the protection of a spacecraft.

Not only were the worms a dim bright point in an otherwise dark day for space travel, their descendants have been used in other space shuttle missions, including the final flight of Endeavour before the shuttle program was retired in 2011, eight years after the disaster.

WATCH BELOW: This worm-like robot could be the thing that saves your life