Expired News - Is Earth's ozone at risk? Five questions answered - The Weather Network
We use cookies on this site to improve your experience as explained in our Cookie Policy. You can reject cookies by changing your browser settings.   READ MORE I ACCEPT

Monday, April 30, 2018, 6:06 PM - Editor’s note: Curbing damage to Earth’s protective ozone layer is widely viewed as one of the most important successes of the modern environmental era. Earlier this year, however, a study reported that ozone concentrations in the lower level of the stratosphere had been falling since the late 1990s – even though the Montreal Protocol, a global treaty to phase out ozone-depleting chemicals, had been in effect since 1989. This raised questions about whether and how human activities could still be damaging the ozone layer. Atmospheric chemist A.R. Ravishankara, who co-chaired a United Nations/World Meteorological Organization Scientific Assessment panel on stratospheric ozone from 2007 to 2015, provides perspective.

What’s the prevailing view among atmospheric scientists today about the state of the ozone layer?

The overall picture is clear: The Montreal Protocol reduced use of ozone-depleting chemicals and will lead to healing of the ozone layer. This is an important goal because stratospheric ozone protects us from exposure to ultraviolet radiation, which can increase the risk of cataracts, skin cancer and other detrimental effects.

Of course, this forecast would be wrong if nations deviate from their treaty commitments, or if the scientific community fails to detect possible emissions of gases that could deplete the ozone layer but are not covered by the treaty. 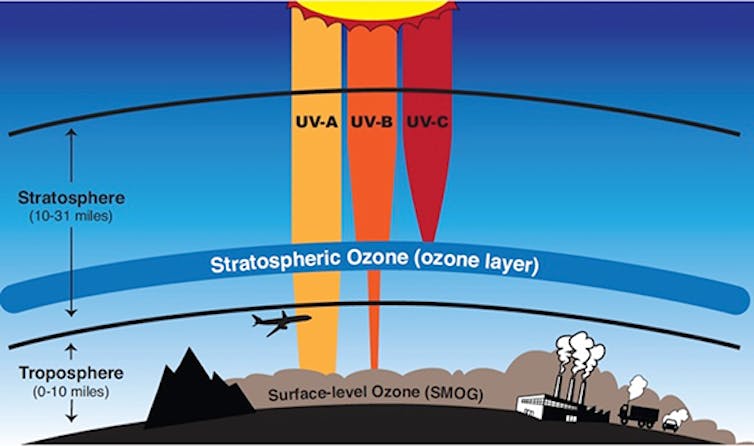 The ozone layer in the stratosphere shields life on Earth from most UV-B and UV-C, the most harmful varieties of ultraviolet radiation. NASA

Our understanding of stratospheric ozone depletion has grown steadily since the mid-1970s, when Mario Molina and F. Sherwood Rowland first suggested that the ozone layer could be depleted by chlorofluorocarbons, or CFCs – research that earned a Nobel Prize. In 1985 Joseph Farman reported on the formation of an “ozone hole” – actually, a large-scale thinning of the ozone layer – that develops over Antarctica every austral spring.

Further work by Susan Solomon and colleagues clearly attributed the ozone hole to CFCs and other ozone-depleting chemicals that contained the elements chlorine and bromine. They also highlighted unusual reactions that take place on polar stratospheric clouds.

In 1987, the United States and 45 other countries signed the Montreal Protocol, which required them to phase out use of ozone-depleting substances. Today 197 nations have ratified the treaty, which has prevented large-scale ozone layer depletion and its harmful consequences. Ozone-depleting substances are also greenhouse gases that trap heat in the atmosphere, so phasing them out under the Montreal Protocol has also helped to slow climate change.

It takes decades to cleanse CFCs and other ozone depleting substances from the atmosphere, so even after the Montreal Protocol went into effect, their concentrations did not peak until around 1998 and are still high. Nonetheless, based on atmospheric observations, laboratory studies of chemical reactions and numerical models of the stratosphere, there is general consensus among scientists that the ozone layer is on track to recover around 2060, give or take a decade. We also know that the future of the ozone layer is intricately intertwined with climate change.

What could explain the continued decline in ozone in the lower stratosphere that was reported earlier this year?

Of course, there are still some gaps in our knowledge of the ozone layer, and these two new reports have spotlighted such gaps.

The first study reported that although ozone concentrations were increasing in the upper stratosphere, they were still declining in the lower stratosphere. It suggested several possible causes, such as increases in uncontrolled, very short-lived gases produced from human activities that can deplete the ozone layer, as well as changes in atmospheric circulation due to climate change.

The second study identified rising levels of certain chlorinated chemicals, referred to as very short-lived substances, that could continue to deplete the ozone layer.

These reports were a little surprising, but not shocking. Scientists expect that we will continue to add to our knowledge of ozone layer, and our understanding will emerge as we digest these findings. The Montreal Protocol requires the scientific community to carry out scientific assessments of ozone depletion every four years precisely because we expect that new information like this will continue to emerge. One of those reviews is under way now and will be published later this year.

If industrial activities causing this decline in the lower stratosphere, Montreal Protocol member countries can amend the treaty to address these new threats. They did so in 2016 to phase out hydrofluorocarbons – coolants, used in air conditioners and refrigerators, that were found to be powerful greenhouse gases. 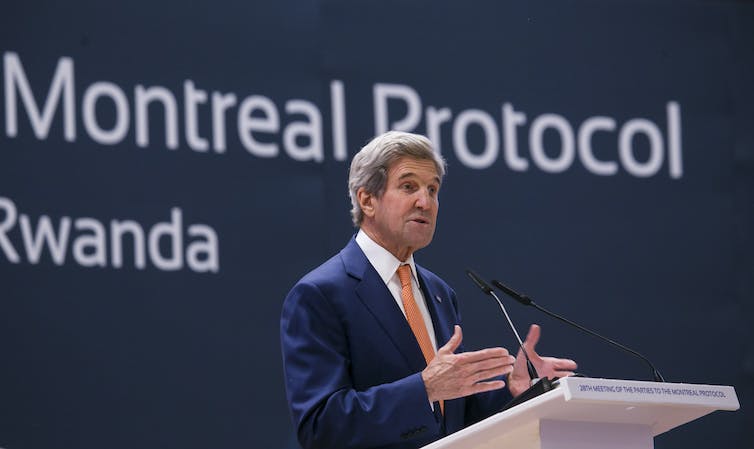 U.S. Secretary of State John Kerry delivers a speech to delegates from Montreal Protocol member countries in Kigali, Rwanda, Oct. 14, 2016. At the meeting nations agreed on a deal to phase out hydrofluorocarbons from air conditioners and refrigerators. AP Photo

If ozone levels in the lower stratosphere have been decreasing for 20 years, why are scientists just detecting that trend now?

Ozone levels change naturally from year to year, so scientists need to look at data over long time periods to tease out trends. The potential for short-lived chlorine and bromine gases to affect the ozone layer has been recognized for a while. More recently, scientists have been measuring concentrations in the atmosphere of dichloromethane, a liquid that is widely used as a solvent, and deduced that if it continues to increase, it will be a potential problem. Trends in emissions of these compounds are uncertain, but some recent results suggest that they are not increasing as rapidly as they appeared to be a few years ago.

Did these studies find any changes in the ozone hole?

No, they did not. They examined ozone changes within 60 degrees of the equator, not over the Antarctic. We do not expect very short-lived substance emissions to significantly influence the ozone hole unless they increase drastically, but this is one more reason to keep an eye on them.

Do these recent findings make you question whether the Montreal Protocol is effective?

No! Indeed, they strengthen my trust in it.

With any environmental agreement, whether it addresses ozone depletion, acid rain, climate change or other issues, it is important to be vigilant during the “accountability phase” – the period after policy decisions have been made and before the targeted results are expected. I am confident that if scientific findings warrant it, Montreal Protocol countries will take further action, and that my granddaughters will see the day when we eliminate the ozone hole.