Expired News - Five dead in three-vehicle crash on Highway 6 in Saskatchewan - The Weather Network
We use cookies on this site to improve your experience as explained in our Cookie Policy. You can reject cookies by changing your browser settings.   READ MORE I ACCEPT

Five dead in three-vehicle crash on Highway 6 in Saskatchewan

Wednesday, February 11, 2015, 12:58 PM - Four of the five people killed in the tragic multi-vehicle accident just north of Regina Tuesday were respected members of the Canadian artists community, with the fifth being the driver of the second vehicle.

Absolutely gutted to hear of the passing of Michael Green and Narcisse Blood in a car crash near Regina. A great loss to our community.

Michele Sereda and Lacy Morin-Desjarlais, both celebrated artists based out of Regina. Sereda, 49, was a major figure in Regina's arts' community. Morin-Desjarlais, 29, was a Saulteux artist with close ties to the University of Regina. The two men travelling in the same vehicle were Michael Green and Narcisse Blood, both from southern Alberta. Green, 58, was the founder of Calgary's One Yellow Rabbit Performance Theatre while Blood, 60, was a First Nations teacher and filmmaker. The name of the fifth victim has not been released but RCMP say he was driving one of the other vehicles and was a 59-year-old man from Cupar.

In addition to the dead, a male and female in a grey 2014 Ford Focus have been taken to the hospital with "undetermined" injuries, RCMP Saskatchewan said in a statement.

Police are investigating the cause of the crash, which occurred about 14 km north of Regina.

There was drifting snow and blowing snow in the area at the time of the crash and the region also saw snow Monday. An RCMP official told reporters that the weather was a likely factor but an investigation could take up to three months to complete. 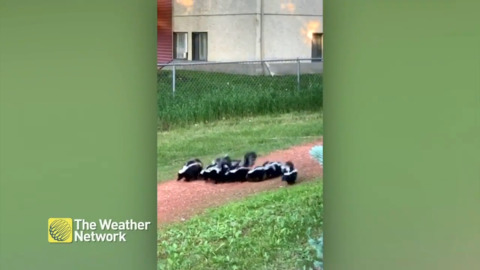