Expired News - The first animals on Earth likely triggered climate change - The Weather Network
We use cookies on this site to improve your experience as explained in our Cookie Policy. You can reject cookies by changing your browser settings.   READ MORE I ACCEPT

Thursday, July 5, 2018, 11:46 AM - Microscopic sea creatures changed the climate, then insects like centipedes grew over six feet tall. A new study adds to our understanding of the Paleozoic era - a fascinating time of evolutions and extinctions that demonstrates the toll life takes on Earth.

What is the impact of life on Earth? From plankton to homosapiens, the growth of various life forms shocked the oceans and atmospheres into rapid transformations that have caused mass extinctions, ice ages, and evolution. A new study reports that the first animals on Earth caused a climate change over 500 million years ago, and helps piece together the harrowing Paleozoic era and how carbon dioxide affects our planet. Read below for a look at how the first animals on earth triggered climate change and nearly all life on Earth was lost.

While modern scientific technologies can show us incredible things about the Earth's history, there are gaps in knowledge of how life began and why so many mass extinctions occurred, particularly during the Paleozoic era when climate and species changed so rapidly.

The first animals on Earth were small sea creatures that lived at the bottom of oceans and despite their remote location, deep ocean organisms play a significant role in the amount of carbon oceans capture and release and the oxygen - currently 70 per cent of the Earth's oxygen is produced by tiny marine plants in oceans, whereas only 28 per cent is produced by rainforests.

Animals, the atmosphere, and the oceans are closely related through a number of feedback relationships - over a quarter of carbon emissions from human activities are captured by plant-like phytoplankton in oceans. Carbon dioxide dissolves into the surface regions of the ocean from the atmosphere and is captured by phytoplankton who either stay in the upper regions of the ocean and recycle their nutrients, or eventually die and sink to the bottom of the ocean floor where the carbon they contained remains for millions of years.

The findings of the study indicate that oceanic activity of Earth's first animals during the Cambrian period over 500 million years ago created low-oxygen conditions in oceans as well as increased phosphate retention in sediment, which decreased both oceanic and atmospheric oxygen levels. Less oxygen in the air causes the atmosphere to thin and let in more sunlight, which then gets trapped and creates a warming effect, which is how global warming occurred during this time.

The Paleozoic era, which was approximately 541 million years ago to 252 million years ago, is characterized by revolutions of biodiversity explosions and mass die-offs when geological and atmospheric conditions changed. Within the Paleozoic era there are six periods of time, with the final being the closest life has ever been to disappearing: Cambrian, Ordovician, Silurian, Devonian, Carboniferous, and Permian.

During this time life did not exist on land and was only in the form of aquatic organisms such as small bacteria and multi-celled algae. But a spontaneous boom of biodiversity occurred between 540 and 520 million years ago where hundreds of unique and complex creatures emerged, such as microscopic sea worms, and scientists have categorized this event as the Cambrian Explosion. There is still debate about what caused the sudden burst of evolution, but some theorize that environmental changes, such as the global warming event, lead to conditions that were more hospitable for growth.

Near the middle of this period a mysterious mass extinction occurred where majority of the life forms died, which lasted until the middle of the following period. Hypotheses for the extinction include low atmospheric oxygen levels or upwelling of cool water in deep ocean areas.

In the early and mid-Ordovician period extremely low levels of oxygen persisted, until the supercontinent Gondwana began to split and create new land masses with shallow seas, which disrupted ocean-atmosphere relationships, such as the balances of carbon and oxygen.

Between 470 and 450 million years ago the Great Ordovician Biodiversification Event occurred, where tremendous changes in life developed due to the new isolated habitats and breeding grounds of shallow seas. The first terrestrial plants occurred as algae gathered on shores then spread over the land due to warm temperatures.

A depiction of Ordovician flora and fauna. Credit: Wikimedia Commons

These terrestrial plants consumed such immense amounts of carbon dioxide for their growth that they caused significant cooling of the atmosphere, the formation of massive glaciers, and a series of ice ages. The freezing conditions at the end of this period led to another mass extinction, where 85 per cent of marine species went extinct.

Shifting continents and increases of greenhouse gases, particularly carbon dioxide, prompted glacial melt that allowed aquatic life to flourish and primitive plants, such as lichens, made their way onto land. When the plant matter began to decay soil formed, enabling the first vascular plants to grow, and charcoal begins to collect.

The Silurian Hypothesis from Gavin Schmidt and Adam Frank questions whether there would be any traces of civilizations from millions of years ago that humans in this present era would be able to detect, named after an episode from the Doctor Who television series where a species of intelligent reptiles is discovered. While Schmidt and Frank do not suggest such reptiles existed during this period, they raise the question of humans' capabilities for detecting previous forms of intelligent life on Earth, since this is when complex life forms began evolving.

Much of what is now as western North America was under water as Gondwana slowly moved northward, and warm, dry temperatures resulted in the formation of the first forests, with rising oxygen levels rose and declining carbon dioxide.

This period is also referred to as 'The Age of Fish' because of the evidence that four-footed marine vertebrate hauled themselves onto land and thrived under the shelter of other plants, who could use their roots to obtain water and no longer needed to live next to a body of water. 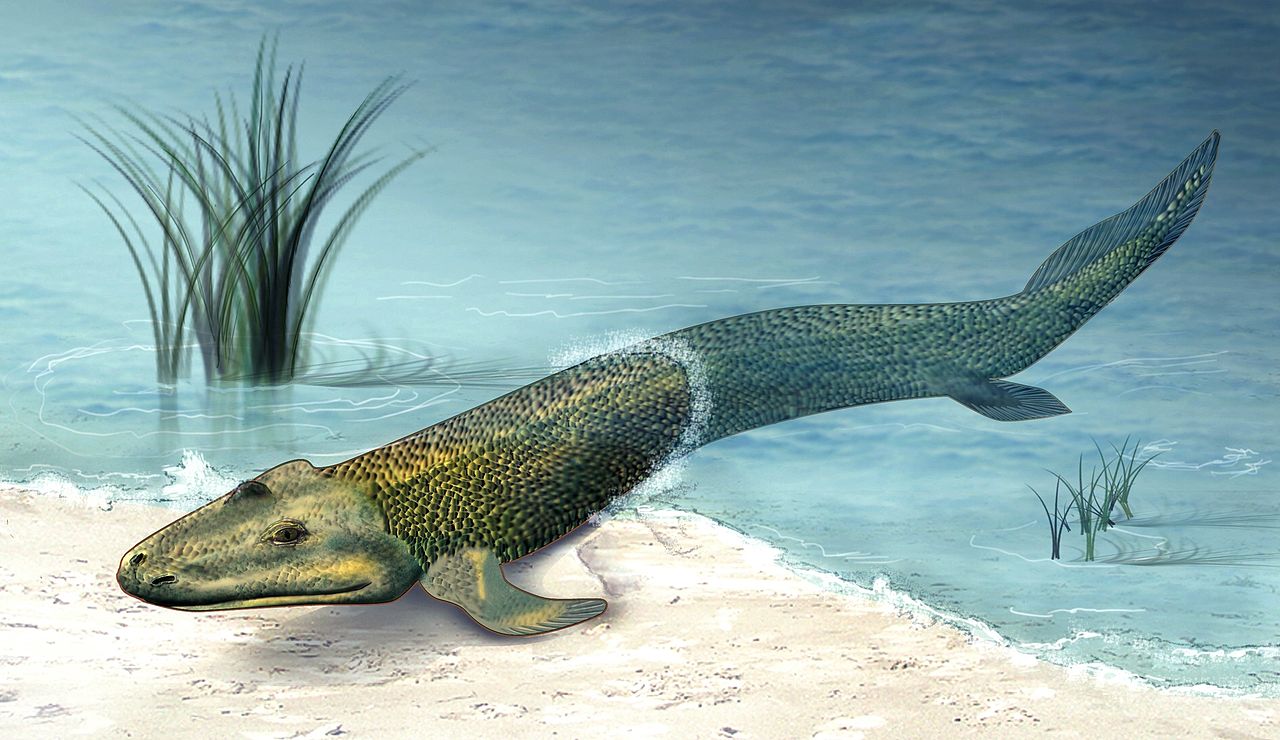 Fish with jaws, such as early sharks, as well as coral reefs were developing, until a catastrophic extinction occurred 360 million years ago that destroyed much of the tropical marine ecosystems. The widespread growth of plants depleted the atmosphere of carbon dioxide, and once again caused oceanic cooling and glacier formation, and extinction of between 79 per cent and 87 per cent of all marine species.

Much of the plant life survived the Devonian mass extinction, and the four-footed vertebrate began to conquer the land as they adapted to birthing their offspring in thin-shelled eggs filled with fluid to prevent them from drying out since they no longer live in the oceans.

Atmospheric levels of oxygen reached the highest rates ever recorded throughout the geological time scale - oxygen was up to 35 per cent of the atmosphere, whereas today it is only around 20 per cent. It is theorized that giant dragonflies, cockroaches, and other bugs were able to grow to shockingly (disturbingly) large sizes because they benefited from surplus oxygen.

The formation of early land vertebrates were potentially slowed due to a rainforest collapse that occurred 307 million years ago drying conditions occurred and the inland forests were unable to cope with the lack of moisture.

Tectonic movements have joined land masses into the supercontinent of Pangea and the animals that were born in eggs and survived the Carboniferous rainforest collapse formed a number of different species, such as those similar to turtles and lizards.

In some animals the jaw and teeth formations have closer resemblances to mammal skulls than reptiles, while other animals like the Pelycosaurs evolved with their legs under their bodies for upright stances.

As some may have predicted, this period ends will an extinction, the largest most catastrophic mass extinction in the Earth’s history. Before mammals or dinosaurs evolved, an event known as 'The Great Dying' occurred 252 million years ago resulted in nearly all life on Earth being destroyed. Over 95 per cent of marine species and 70 per cent of terrestrial species were wiped out in a series of extinction pulses theorized to include extreme fluctuations in carbon dioxide, volcanic eruptions, deathly amounts of methane produced from microbes, acidification of oceans, and warming temperatures.

The continuous cycle of life, changes in the globe's environments, and mass extinctions demonstrate that even though Earth is able to support life it can transform into a drastically different planet with inhospitable conditions. In 2012 carbon dioxide levels reached 400 parts per million, which is the highest rate ever recorded during human existence, and perhaps there is no amount of geological discovery or understanding that could implore humanity to stop the carbon emissions.

WATCH BELOW: Would you make the change? The Weather Network staff try environmentally friendly straws