Expired News - Evidence for Europa's ocean found hiding in 21-year-old data - The Weather Network
We use cookies on this site to improve your experience as explained in our Cookie Policy. You can reject cookies by changing your browser settings.   READ MORE I ACCEPT

Thursday, May 17, 2018, 6:42 PM - Europa water vapour plume spotted decades before Hubble saw them, NASA is sending a helicopter to Mars, and Wall-E and EVA snap of picture of home on their way to the Red Planet. It's What's Up In Space!

Remember a few years ago, when scientists excitedly reported that the Hubble Space Telescope may have spotted plumes of water vapour streaming from the surface of Europa, the smallest of Jupiter's four Galilean moons? The news caused quite a stir, since there had long been speculation that Europa - like Saturn's Enceladus - could harbour an ocean of salty liquid water, deep under its thick icy crust. The existence of such an ocean, warmed by tidal heating of Europa's crust by Jupiter and the other Galilean moons, would then give the possibility that live could exist on the icy moon.

Now, a new study shows that data from NASA's Galileo spacecraft may have just confirmed the existence of Europa's subsurface ocean, thanks to a close encounter with what could have been a water plume shooting off the icy moon's surface, over 20 years ago. 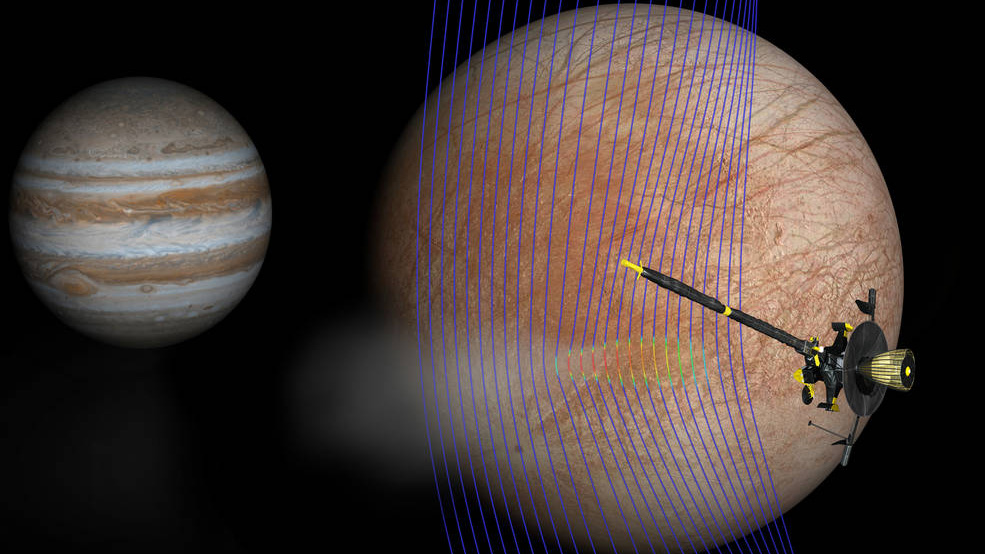 Artist’s illustration of the Galileo spacecraft (in the foreground) and its passes over Jupiter's icy moon, Europa, back in 1997. The magnetic field lines (in blue) show how the water vapour plume interacts with plasma flowing in Jupiter's magnetosphere. The red colors on the lines show more dense areas of plasma. Credits: NASA/JPL-Caltech/Univ. of Michigan

Data collected by NASA’s Galileo spacecraft in 1997 were put through new and advanced computer models to untangle a mystery - a brief, localized bend in the magnetic field - that had gone unexplained until now. Previous ultraviolet images from NASA’s Hubble Space Telescope in 2012 suggested the presence of plumes, but this new analysis used data collected much closer to the source and is considered strong, corroborating support for plumes.

With NASA currently planning their Europa Clipper mission, which is currently scheduled to launch sometime in the early 2020s, this is a very valuable discovery, because it offers much more solid evidence than Hubble was able to give us.

"There now seem to be too many lines of evidence to dismiss plumes at Europa," said Robert Pappalardo, Europa Clipper project scientist at NASA’s Jet Propulsion Laboratory. "This result makes the plumes seem to be much more real and, for me, is a tipping point. These are no longer uncertain blips on a faraway image."

A helicopter on Mars??

When NASA's next Mars rover launches to the Red Planet in July of 2020, it is apparently bringing along some assistance for its exploration of Mars.


"Exploring the Red Planet with NASA’s Mars Helicopter exemplifies a successful marriage of science and technology innovation and is a unique opportunity to advance Mars exploration for the future," Thomas Zurbuchen, Associate Administrator for NASA's Science Mission Directorate, said in a NASA statement. "After the Wright Brothers proved 117 years ago that powered, sustained, and controlled flight was possible here on Earth, another group of American pioneers may prove the same can be done on another world."

When NASA launched the InSight lander in early May, there were two tag-a-longs on the rocket, which are now trailing along with InSight on its way to Mars. The twin Mars Cube One (MarCO) cubesats, which are nicknamed Wall-E and Eva (after the Disney/Pixar robots), really have but one mission - fly as far as they can towards Mars, and if they actually make it there, take images of, and gather data about, Insight's journey through Mars' atmosphere to the surface, and send that information back to scientists back here on Earth.

Wall-E and Eva have already set a record though. They are the very first cubesats to reach interplanetary space, and on May 9, 2018, they turned around and snapped a picture to commemorate this record, by imaging Earth and the Moon.

This newest 'pale blue dot' image, from one of the Mars Cube One satellites, is a "homage to Voyager", according to Andy Klesh, MarCO's chief engineer at NASA JPL. Credit: NASA/JPL-Caltech

Watch below for more details on MarCO's journey.

RELATED VIDEO: What is NASA InSight and what will it show us?