Expired News - El Niño predicted to start in four to eight weeks - The Weather Network
We use cookies on this site to improve your experience as explained in our Cookie Policy. You can reject cookies by changing your browser settings.   READ MORE I ACCEPT

News
Editor's Choice
Canada's 2020 Fall Forecast & Winter Preview
The term is used quite often, but what exactly does it mean for our seasons? We explain.

El Niño predicted to start in four to eight weeks

Friday, October 10, 2014, 4:32 PM - El Niño is forecast to begin in the next 1-2 months and last into the spring of 2015 in the Northern Hemisphere, according to a Thursday statement released by the National Atmospheric Oceanic Administration (NOAA).

The weather event has been making headlines months, despite the fact that meteorologists now predict this year's El Niño  will be 'weak' in nature.

"Most models predict El Niño  to develop during October-December 2014 and to continue into early 2015," NOAA's Climate Prediction Center said in its Thursday statement.

"The consensus of forecasters is a 2-in-3 chance of El Niño  during the November 2014-January 2015 season. This El Niño  will likely remain weak ... throughout its duration."

The most current models differ from predictions made earlier in the year, when some predicted we could see a strong El Niño, similar to the one observed in 1997-1998.

WHAT IS EL NINO?

In a normal year strong, prevailing trade winds blow westward, dragging warm surface waters across the Pacific to Australia and Indonesia -- but every few years the trade winds slacken or change direction, causing ocean water to warm up.

The warmer water heats the moist air above it, making it buyoant enough to form clouds and storms. This can influence weather patterns on a global scale -- and it can do so for for many months. 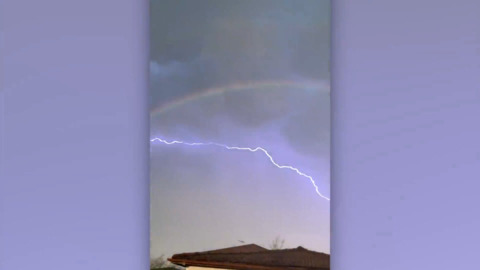