Expired News - Drones flying into restricted air 'going to kill somebody' - The Weather Network
We use cookies on this site to improve your experience as explained in our Cookie Policy. You can reject cookies by changing your browser settings.   READ MORE I ACCEPT

Drones flying into restricted air 'going to kill somebody'

Monday, October 1, 2018, 3:13 PM - From the ground it can be hard to see the drama taking shape in Canadian skies or sense the danger that's brewing as traditional aircraft come head to head with drones invading their airspace.

"They're just in the way and causing a potential hazard that someday is going to kill somebody," said David Cooke, who has a unique perspective on aviation and drones.

Cooke is a retired military pilot who flew jets for the Royal Canadian Air Force, piloted reconnaissance helicopters in Germany during the Cold War, then helped teach combat flying at the air force base in Gagetown, N.B.

For the last few years, he has been running his own business, Canda, flying commercial drones out of his hometown of Sarnia, Ont.

He's not happy with what he describes as an explosion of irresponsible drone use.

In 2014, Transport Canada reported 38 cases of drones flying too close to airplanes and airports. That number ballooned to 145 in 2016 and dropped slightly to 135 in 2017. The department's latest numbers for this year only go up to June 30. So far, there have been 48 sightings.

"I don't think they're vicious criminals doing this stuff. They're just idiots out there flying around and think they can go anywhere with this little flying camera," said Cooke.


The number of drones flying into restricted airspace doesn't surprise Bernard Gervais, president and CEO of the Canadian Owners and Pilots Association. His group has 16,000 members and represents people who fly recreationally and travel with their own aircraft.

He said several of his members have had close calls with drones.

A spinning propeller that comes into contact with a drone could bring a plane down, he said.

RELATED: Reminder - you aren't allowed to fly a drone into a wildfire

Cooke thinks the likelihood of a plane actually striking a drone is slim, despite a drone doing just that last October in Quebec.

He believes the real danger is pilots overreacting when they see a drone and putting themselves and their passengers in harm's way.

This image was taken during a practice flight to test how well pilots could spot drones. The pilots were told exactly where the drone would be and it was still very difficult to spot. The red circle shows the drone's location. The pilot in this photo was travelling at 100 knots and had only six seconds before he passed the drone. (inskyphoto.com/CBC)

"At Toronto Island airport, a Porter Airlines Dash 8, I think, made an evasive manoeuvre​ that hurt a stewardess," said Cooke. "Reacting and overreacting actually to something like that is just as much likely to cause damage or hurt somebody or kill somebody or bring down a plane."

Cooke said commercial pilots are so well trained that it's unlikely they'd react dangerously, but students in flying school or people who only fly occasionally could make those kind of mistakes.

Most of the drone sightings reported to Transport Canada were collected by pilots and air traffic controllers near major airports in places like Ontario, Quebec and British Columbia.

In Halifax, there were only three drone sightings around the airport in all of 2017.

That kind of flying is illegal; recreational drones are not allowed within 5.6 kilometres of any airport or any area where aircraft take off and land.

It's not clear exactly what attracts some people to airports and other restricted airspace, but Cooke said in the last year or so he and other pilots have noticed a disturbing number of drone videos on YouTube of planes taking off and landing.

The videos often feature drones getting within a few dozen metres of a plane. 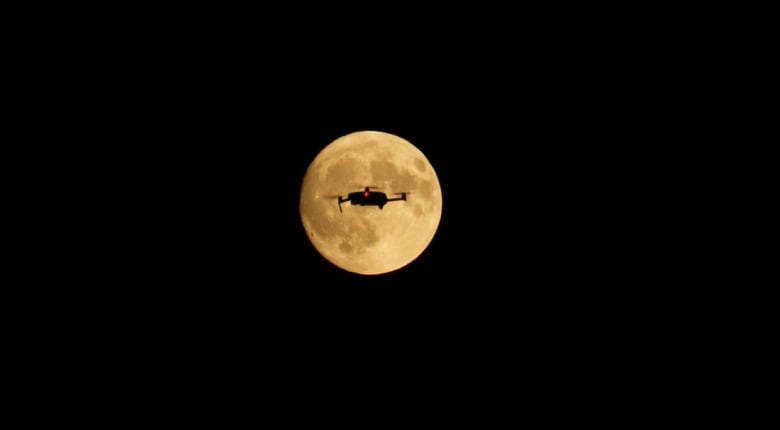 Due to their mainly plastic composition, many smaller drones don't show up on radar. Transport Canada says the National Research Council is working to find new ways to detect drones. (inskyphoto.com/CBC)

"That's happening all the time now. More and more regularly around airports. When people see these videos online [they say], 'Well, I can do that, I want to get a better one, I'll do one with a sunset, let's do it at night,'" said Cooke. "It's really stupid stuff."

Transport Canada does issue fines to offenders, but even that can be tricky. By the time a drone sighting is reported and someone starts to investigate, the drone and its user can be long gone.

Since 2015, Transport Canada has only issued 60 fines. For recreational drone users, those fines can go up as high as $3,000 if they're caught flying in a restricted area.

Gervais said more enforcement of the rules, stiffer fines and some kind of licensing or permit program for recreational drone operators would help curb the problem and let everyone better share the sky.

Félix Meunier, director of unmanned aircraft systems for Transport Canada, said the number of drone sightings in restricted airspace appears to have stabilized. He said the jump in reported sightings since 2014 is partially because more Canadians are buying drones.

Transport Canada does not track who buys recreational drones nor does it license who can use them. However, it does require people who want to operate drones in restricted airspace or use them for commercial research purposes to get a Special Flight Operations Certificate.

Along with the increased drone use, Meunier said more pilots now report drone sightings because they have a better sense of the dangers drones pose.

"Most drone owners want to do the right thing," he said.

"Some of them are not aware of the danger associated with air drone use near other aircraft. So I think in general that's where things are going and if there are some efforts where we need to do more enforcement, well, we do it."

WATCH BELOW: RUSSIAN PIANIST CAMPAIGNS FOR CLEAN PLANET BY PERFORMING ON LANDFILL