Expired News - Daredevil 'oddball' among 12 newly discovered Jupiter moons - The Weather Network
We use cookies on this site to improve your experience as explained in our Cookie Policy. You can reject cookies by changing your browser settings.   READ MORE I ACCEPT

Wednesday, July 18, 2018, 9:50 AM - Astronomers have found 12 previously unknown moons circling Jupiter, including one 'oddball' whose days are numbered, due to its highly unusual orbit.

When you're scanning space for a distant planet, that's potentially lurking at the far edges of our solar system, it certainly pays off to keep an eye on what's going on a little closer to home!

A team of astronomers searching for the proposed 'Planet Nine', a super-Earth planet thought to reside far beyond Pluto, just made a huge find - a dozen newly-discovered moons circling the planet Jupiter, including an 'oddball' moon that takes a very risky path around its parent.

SEE ALSO: Facts behind 7 of Earth's most SPECTACULAR weather events 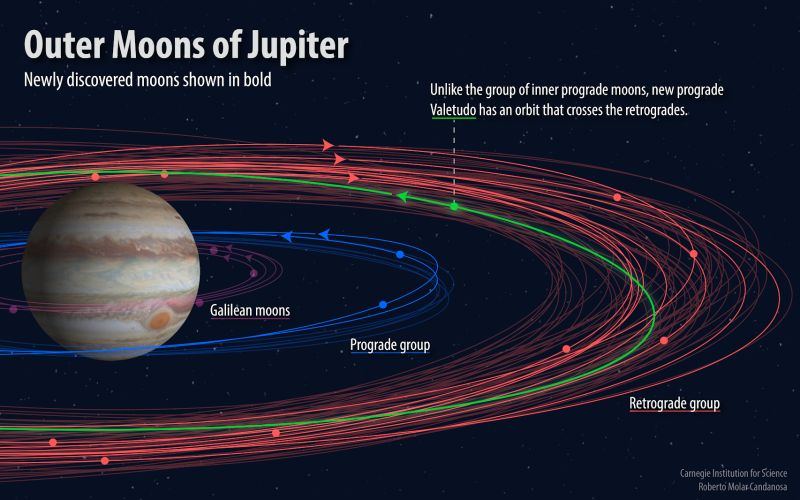 The orbit of a dozen previously unknown moons around Jupiter are shown here, including the 'oddball' discovery, Valetudo. Credit: Carnegie Institution of Science/Roberto Molar Candanosa

Jupiter, the largest planet in the solar system, was known to have 67 moons circling around it, including 4 that are easily visible from Earth using just binoculars. Now, with a new announcement from a team of astronomers, led by Scott S. Sheppard from the Carnegie Institution for Science, Jupiter's tally has jumped to a total of 79 known moons.

It's easy to understand why these 12 new additions had been missed so far. Each is only one to three kilometres wide, and thus would be very difficult to spot using most telescopes.

Using the Blanco 4-meter telescope at Cerro Tololo Inter-American in Chile, with its highly-sensitive Dark Energy Camera, however, gave the team a distinct advantage.

"Jupiter just happened to be in the sky near the search fields where we were looking for extremely distant Solar System objects, so we were serendipitously able to look for new moons around Jupiter while at the same time looking for planets at the fringes of our Solar System," Sheppard said in a Carnegie press release.

This interest in finding new moons around Jupiter wasn't just a spur of the moment decision for Sheppard. He's a veteran.

Jupiter's moons are arranged in a specific pattern that the giant planet has worked out over time.

Closest to the planet are the four small 'inner irregulars', named Metis, Adrastea, Amalthea and Thebe. Next out are the four large Galilean moons - Io, Europa, Ganymede and Callisto - that are easily visible from Earth, even with binoculars or a small telescope.

Beyond these is a group known as the 'prograde' moons - more tiny, irregular satellites, all of which travel around Jupiter in the same direction that the planet rotates (counter-clockwise, in the view shown below). Two of the newly discovered moons were found among these prograde moons. 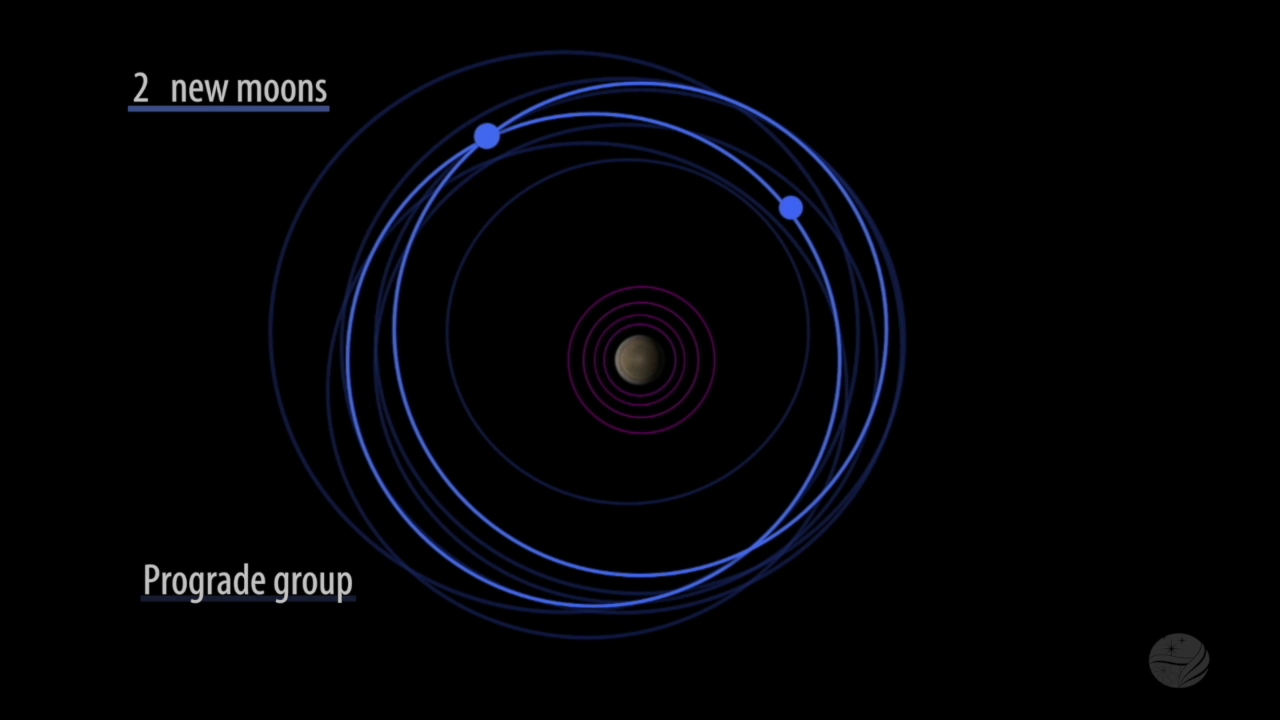 This screencapture shows the prograde moons of Jupiter, including the two newest discoveries (in bold). These moons orbit in a counter-clockwise direction in the view above. Jupiter, itself, is shown at the centre of the image, while the orbits of the Galilean moons are shown in purple. Credit: Carnegie Institution of Science

Outside the orbits of the prograde moons is the largest group, the retrograde moons, which orbit around Jupiter in the opposite direction to the planet's spin. Nine of the new discoveries are found in this group. 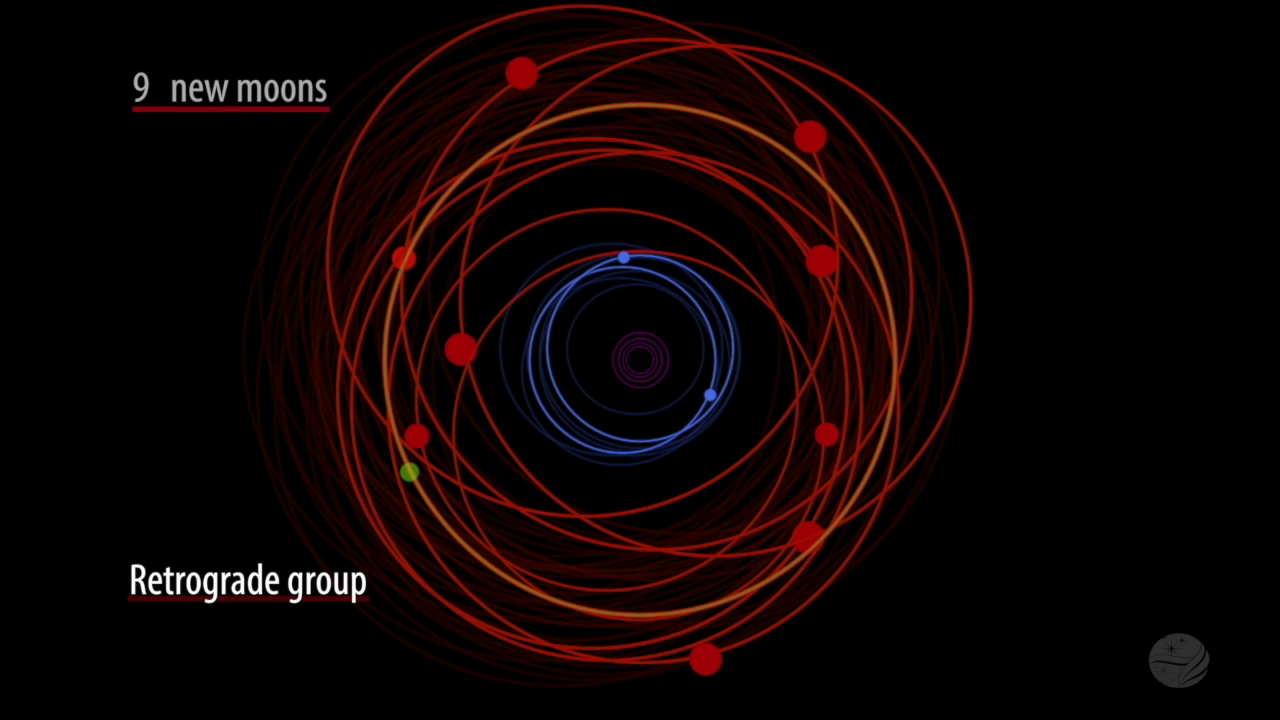 The last of the team's discoveries is the strangest of them all.

"Our other discovery is a real oddball and has an orbit like no other known Jovian moon," Sheppard explained. "It’s also likely Jupiter’s smallest known moon, being less than one kilometer in diameter."

Valetudo, as the team calls this oddball moon, is named after the Roman goddess of health, cleanliness and hygiene. It orbits Jupiter in and amongst where the retrograde moons reside, however, it follows a highly risky prograde orbit as it does so. 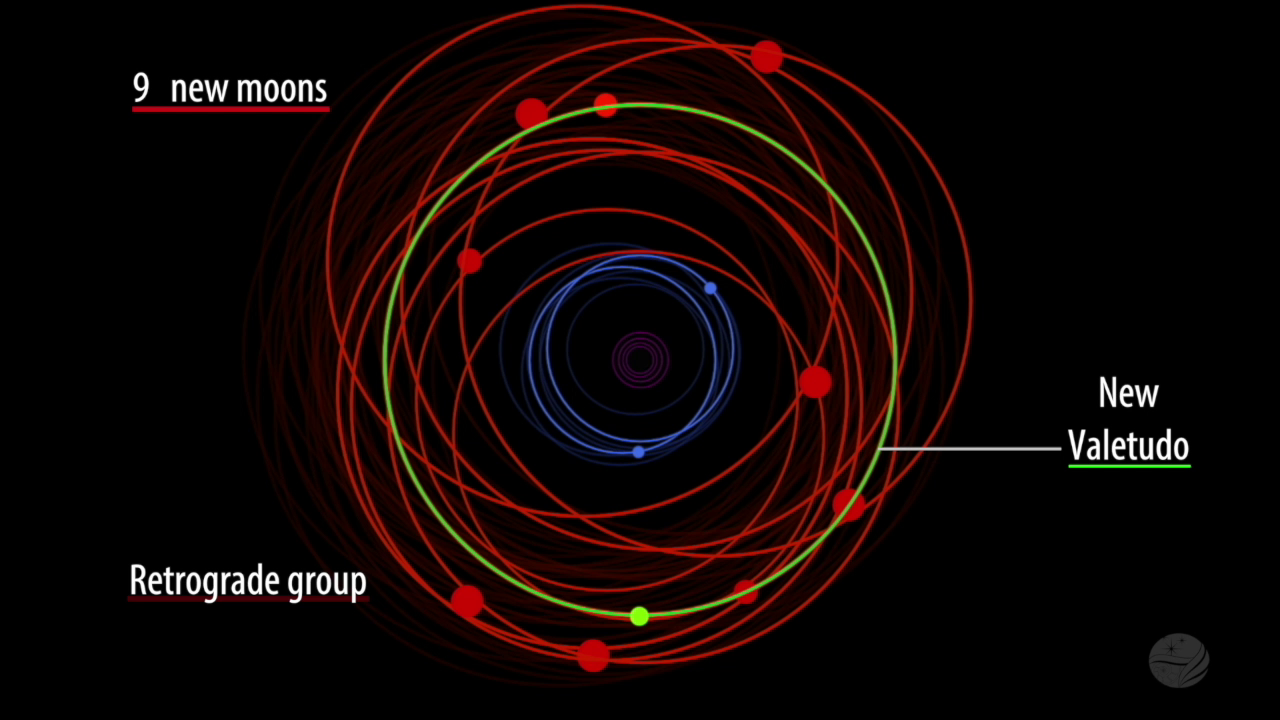 The orbit of 'oddball' Valetudo, shown in green, compared to the orbits of the other moons. While the retrograde moons orbit in a clockwise direction, Valetudo travels in a counter-clockwise direction. Credit: Carnegie Institution of Science

With the moon's orbit set at an angle to the rest, this means that Valetudo doesn't take the riskiest path around Jupiter, but it does dive through the orbits of the retrograde moons, inviting a collision at some point.

"This is an unstable situation," Sheppard said. "Head-on collisions would quickly break apart and grind the objects down to dust."

According to the team, these moons, and especially Valetudo, likely did not form at the same time as Jupiter, but rather are probably the tiny remnants of larger objects that suffered numerous collisions as they circled the gas giant.

Given their small size, if the moons had existed in the early days of the solar system, the gas and dust that surrounded the Sun at that time would have exerted a strong drag on them, causing them to lose speed and spiral in to crash into Jupiter. Since they are still around, now, that means they formed after that gas and dust had been swept away by the solar wind.

Overall, this was a tough, but very rewarding discovery.

It required the use of one of the sharpest new astronomical cameras, linked to a powerful telescope taking advantage of the clear, dry air of northern Chile. Followup observations were conducted from four other telescopes, in Chile, Arizona and Hawaii, to confirm the finds. Precise calculations were also performed by scientists with the International Astronomical Union’s Minor Planet Center, and NASA's Jet Propulsion Laboratory, using the initial observations, to not only confirm that these were not just asteroids passing through their field of view, but also to ensure that astronomers could keep track of these tiny moons and not lose them.

It also shows that, while we continue to gaze out into the universe for new discoveries, we are certainly not done discovering new objects in our very own 'backyard'.

WATCH BELOW: TAKE A TOUR OF JUPITER AND ITS AMAZING AURORAS 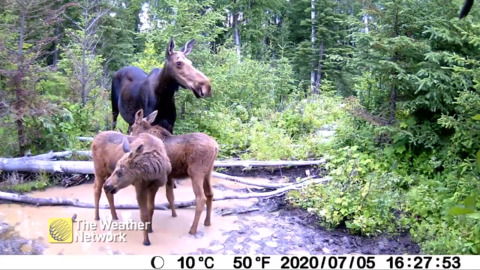