Expired News - Dogs and cats are spreading fleas around the world - The Weather Network
We use cookies on this site to improve your experience as explained in our Cookie Policy. You can reject cookies by changing your browser settings.   READ MORE I ACCEPT

Dogs and cats are spreading fleas around the world

Monday, January 22, 2018, 7:50 PM - Pet owners spend billions of dollars every year to prevent (or destroy) fleas on their fuzzy loved ones, but new research shows that cats and dogs spread their parasites to wild animals around the world.

Despite their names, cat and dog fleas (Ctenocephalides felis and C. canis, respectively) are found on many animals in almost every country. They infest both native and invasive species, and – apart from annoying itches – spread the bacteria that cause typhus, cat scratch disease and even bubonic plague.

While plague may seem like an antiquated illness, and is easily treated with antibtiotics, it causes many deaths a year, particularly in developing nations. Understanding how fleas pass from pets to wildlife (and to humans) is a crucial step in combating the parasites’ spread.

Read more: Plague outbreak: where does it still exist and could it spread?

Fleas around the world

We also used model-based analysis to help predict which species are more susceptible to fleas. The fleas most commonly infest feral cats and dogs, as well as introduced mammals such as European red foxes, black rats and brown rats.

Already considered some of the most damaging animal species for global biodiversity, it seems that feral cats, foxes and rats are also spreading fleas. This finding supports mounting evidence that invasive species are important carriers of a variety of parasites.

We also found that both flea species are commonly seen on native wildlife species that live in close proximity to humans. These include opossums in North America, brushtail possums in Australia and golden jackals in Europe and Asia. 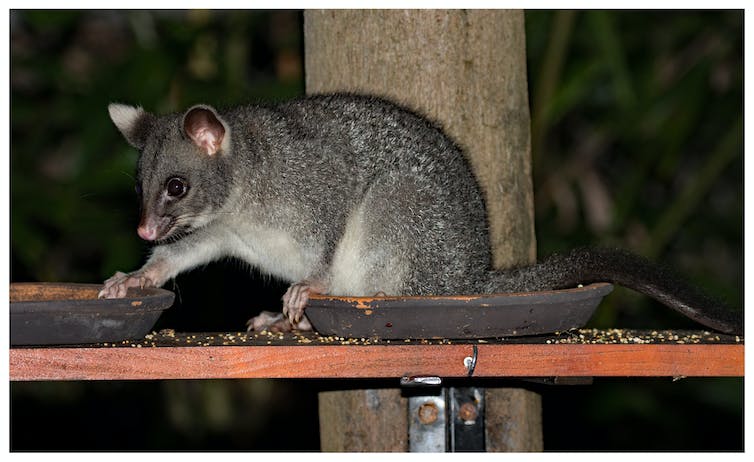 Possums in Australia can get fleas when they interact with pets in our backyards. Geoff Whalan/Flickr, CC BY-NC-SA

This pattern of infestation in species that overlap with humans is important, as it tells us about possible pathways for fleas to spread from pets to wildlife, and vice versa. Our pets interact with wildlife more frequently than we might think.

The unrelenting spread of the cat flea

The name “cat flea” is rather misleading, as this species is the most common flea on pet cats and pet dogs. But cat fleas are clearly not just limited to infesting pets or feral animals. Our research found that these fleas infest an incredible diversity of wild mammals. Cat fleas have been found on more than 130 wildlife species around the world, representing nearly 20% of the species that we surveyed in our database.

Read more: The marmot, a hungry dog and how to put down plague in modern China

This diversity of infested host species makes cat fleas one of the most widespread ectoparasites in the world.

Because fleas are able to opportunistically use such a wide variety of species as hosts, controlling their spread through natural ecosystems is incredibly difficult.

Many studies have found that human encroachment into wilderness areas can increase parasite transfer (also known as spillover) between domestic animals and wildlife. Ours is no exception. The potential for flea spreading found by our research represents a considerable threat to animal welfare.

By removing the fleas from our pets, we may be able to go a long way towards improving the welfare of wildlife and slowing the spread of disease to our pets.

Responsible pet ownership also includes discouraging our pets from roaming into urban parks and wilderness areas. Simple steps such as keeping dogs on leads or preventing cats from roaming can make a big difference in limiting parasite exchange.

It’s also a good idea to try to limit the interaction of pets with feral and native animals in our backyards, perhaps by reducing easy access to food waste.

Finally, there’s also a role for communities in limiting how urbanisation and road expansion encroach on native species. Good urban planning and landscape management can create sufficient and separate habitat for both pets and wildlife.

VIDEO: ROAD TRIPS WITH YOUR PET: