Expired News - The storm that killed 500,000, and 7 other deadliest storms - The Weather Network
We use cookies on this site to improve your experience as explained in our Cookie Policy. You can reject cookies by changing your browser settings.   READ MORE I ACCEPT

Tuesday, September 11, 2018, 4:31 PM - Japan is cleaning up after Typhoon Jebi, the strongest storm to hit the country in a quarter century, killed around a dozen people and caused widespread damage.

As devastating as the storm has been, the sad fact is that it is nowhere near the deadliest storm to strike Asia.

Here are eight tropical storms - known to us as hurricanes in the Atlantic, but called typhoons in the Pacific and cyclones in the Indian Ocean - that stand as the deadliest known storms of all time.

This was the deadliest storm to ever strike the Southeast Asian nation of Burma, also known as Myanmar.

The cyclone was packing winds of up to 164 km/h when it came ashore, bringing with it a monster storm surge that reached far inland up along the low-lying and densely-populated Irrawaddy Delta.

You can see what that means in the satellite comparison below: 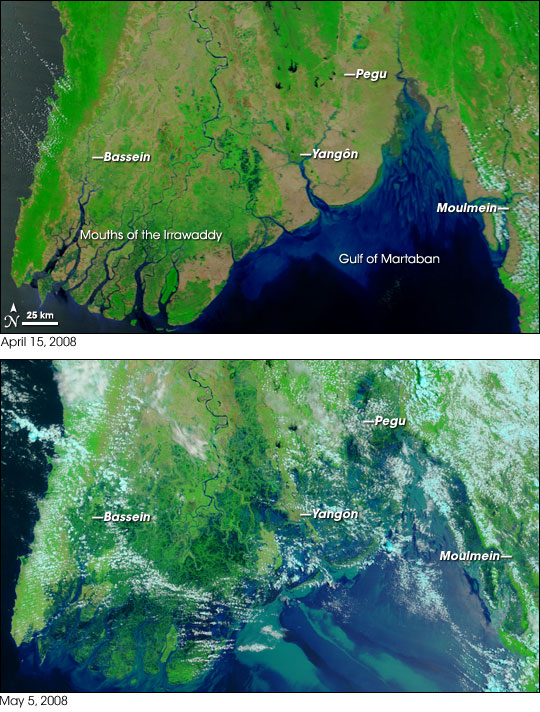 More than 140,000 lives were lost, and the number may be higher, given that many bodies were washed out to sea and never recovered.

Infrastructure was also wrecked: The damage included 450,000 homes totally destroyed, hundreds of thousands more damaged, 4,000 schools and 75 per cent of medical centres, all in one of the poorest nations in Southeast Asia.

To make matters worse: The military junta that had ruled the nation for decades refused to allow foreign aid into the country. French, British and U.S. warships, laden with much-needed relief supplies, drifted idle off the country’s coast.

When the military finally allowed help in, it was three weeks later, and only civilian aid groups were allowed to the disaster zone, by which point the humanitarian crisis had only worsened.

This storm marks Bangladesh’s first appearance on this list, and by no means its last.

With winds of around 235 km/h, it was vastly more powerful than Cyclone Nargis when it came ashore.

Storm surge of more than 7 m was recorded as the sea roared up the low-lying riverlands that make up the vast majority of Bangladesh’s territory. 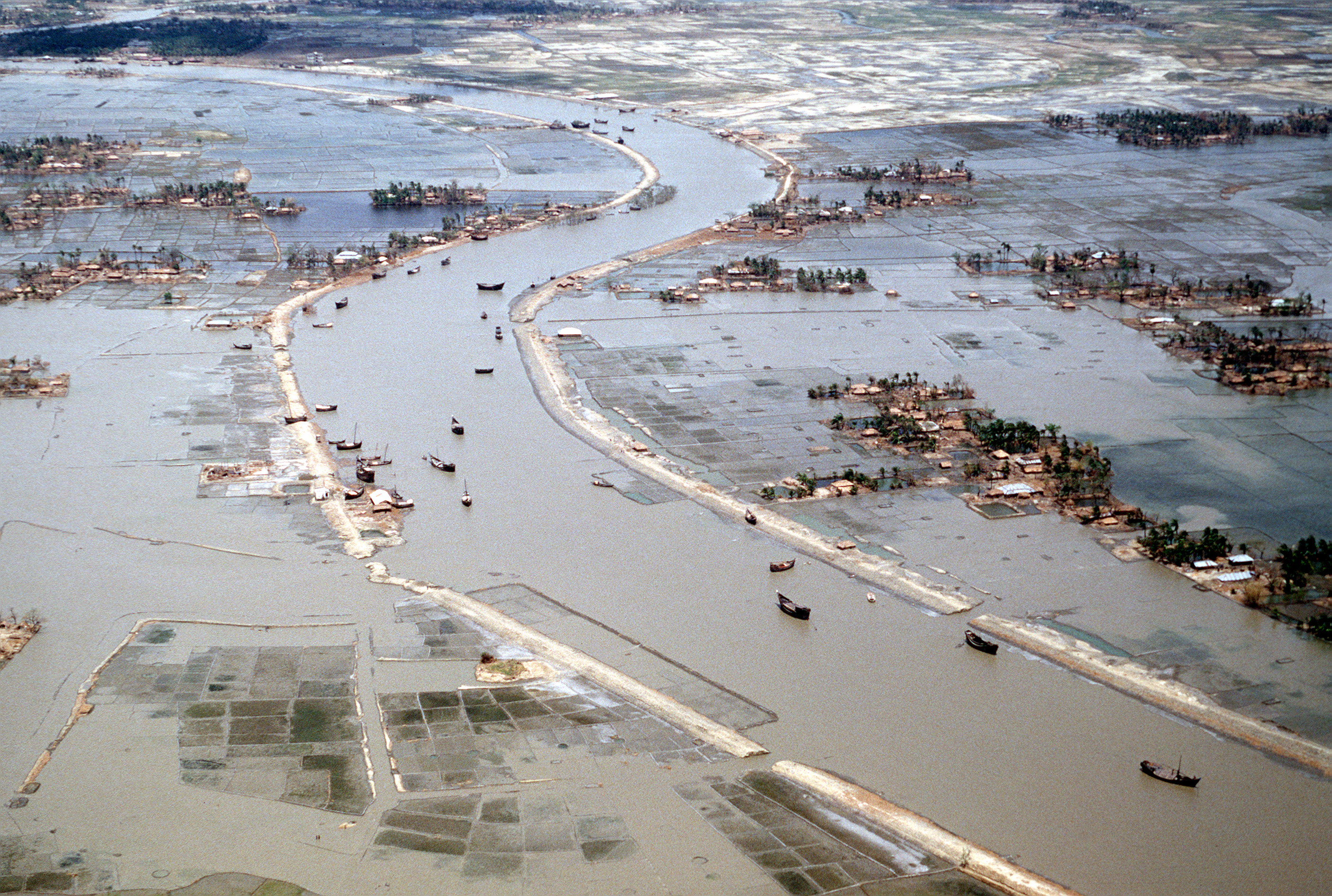 In the resulting floods, a little under 140,000 people were killed.

To understand why the death toll in this cyclone, and others that struck the country, is so enormous you have to look at population, terrain and infrastructure.

Territory-wise, Bangladesh is actually not much larger than our three Maritime Provinces combined, but it is home to around 150 million people, more than four times Canada’s population.

Almost all Bangladeshis live in and along the rivers that flow through Bangladesh, in very flat and densely cultivated terrain.

Add to that the fact that in poverty-stricken Bangladesh, much of the population also live in poor housing, so when the waters rise even seven metres, a huge and thickly populated area of land floods, leading to the staggeringly huge numbers of dead in this storm, and others like it.

Making matters worse: When the 1991 storm’s waters subsided, 400,000 acres of cropland had been swamped or damaged, with the soil and fresh water sources contaminated with salt from the sea.

Another catastrophe for Bangladesh, this one reaching back into the 19th Century, when the area was ruled as part of the British Empire.

This unrated cyclone struck the country’s Meghna River, a part of the Ganges delta. At 12 km in width at its most broad extent, it flows into one of the largest estuaries on Earth.

To the river’s normally calm waters were added a storm surge even higher than the 1991 cyclone, an estimated 12 metres according to this Bangladeshi government source.

More than 200,000 thousand people were killed, either due to the storm surge and strong winds, or due to the resulting famine and epidemics that followed.

It was déjà vu for the area: A similar storm struck the area in the 1500s, bringing violent thunder and lightning that reportedly lasted for five hours, killing thousands of people and livestock.

Although China is one of the most typhoon-stricken countries on Earth, Typhoon Nina’s death toll was due less to the storm and more due to a catastrophic engineering failure.

Nina was only at weak tropical depression strength when it made its way inland three days after landfall, but when it parked itself over central China, it drenched the area with torrential rains, more than 1,000 mm in the hardest-hit areas.

The problem was that beneath Nina was the Banqiao River dam complex.

The main dam, standing tall at 116 m in height, was already known to have several flaws when it was repaired with Soviet advice in the 1970s and dubbed the “iron dam.”

Add to that the unceasing rain – more than the dam was designed to withstand – and the result was one of the worst dam-related disasters ever.


Two large dams, and at least 10 smaller ones along the complex, failed, releasing a six-metre-high cascade containing more than 600 cubic metres of water racing downstream.

Around 11 million people were affected by the storm and the dams’ collapse. The damage is believed to have been more than $1.2 billion.

Due to China’s state secrecy, the details of the disaster weren’t declassified until 2005, but even so, death toll estimates vary. The United States’ NOAA says 229,000 people were killed, other sources say 171,000, while this Chinese source claims only 26,000 people were killed as a direct result of the floods.

As we’ve shown, China is a common destination for typhoons, but its neighbour Vietnam is no stranger to them. And in 1881 the Vietnamese city of Haiphong was the target of the deadliest typhoon to strike East Asia.

You may not have heard of the city, but it is today the third largest community in Vietnam, the largest port in the north and a major industrial centre.

Thanks to its strategic location and deep water access, it was already a valuable commercial centre when the French began to penetrate the region, eventually making it part of the colony of French Indochina.

Unfortunately, the city was situated on low-lying land at the mouth of a major river estuary, so when a powerful typhoon struck the area in 1881, it was virtually defenseless.

More than 300,000 people are estimated to have lost their lives in that storm.

These two cyclones, separated by a century, help illustrate how difficult it is to come up with exact numbers of dead for extreme weather events the further back you go.

The 1839 event, in which a cyclone struck the region of Coringa in what’s now the state of Andhra Pradesh, is cited in several locations, in western sources and Indian.

We’re not sure how reliable the death toll figures are (even today, when record keeping is as advanced as ever, we have trouble tracking exact numbers), but the storm is said to have killed around 300,000 people, and produced a storm surge of more than 12 m.

This Indian TV station says 25,000 ships were wrecked by the storm – yet this Indian government website omits the storm completely.

That same site does list the 1737 cyclone as the country’s deadliest-ever cyclone, also with 300,000 dead, but many other sources cast serious doubt on that number.

For one thing, the storm is supposed to have done serious damage to Calcutta (now Kolkhata) – which at the time only had around 10,000 inhabitants in total.

Several sources at the time state that although rice stocks were devastated and most of the city’s thatched houses were destroyed by the winds and 12 m storm surge, the actual number of dead was at around 3,000.

But by the time that number was reported in the European press, months later, it had ballooned to hundreds of thousands. The 300,000 toll is what commonly appears in many lists today, even though it’s probably unreliable.

Given how often Bangladesh has been on this list, it is sadly fitting that the country itself was born in the wake of the deadliest tropical storm ever recorded.

Everything we’ve discussed so far – large populations, low-lying terrain, poor infrastructure – were all on display with this cyclone rolled in.

The strong winds and 10-metre storm surge left up to 500,000 people dead, including 100,000 fishermen. That blow to the fishery, along with on-land crops, helped contribute to a humanitarian crisis that may have been responsible for hundreds of thousands more deaths.

Bangladesh at the time was actually part of Pakistan, an exclave ruled from Islamabad but separated by thousands of kilometres of Indian territory.

Unrest had been brewing among the population of what was called “East Pakistan” for some time before the storm hit. So when the central government in West Pakistan bungled the response to the crisis, it was the last straw for many. Opposition parties won big in the national elections, and the region was in open revolt the next year.

The bloody civil war ended after eight months when India intervened on the side of the rebels.

Although Bangladesh won its independence, it continues to be a high-risk area for cyclones.

For some context on that half-million death toll: When we talked about the deadliest Atlantic hurricanes, the worst of those storms caused 27,000 deaths at most. It’s safe to say that as devastating as the storms close to home can be, they pale in comparison to what people on the shores of the Pacific and Indian oceans face.