Expired News - Eight deadly Atlantic hurricanes that left a mark on history - The Weather Network
We use cookies on this site to improve your experience as explained in our Cookie Policy. You can reject cookies by changing your browser settings.   READ MORE I ACCEPT

Eight deadly Atlantic hurricanes that left a mark on history

Wednesday, September 5, 2018, 4:20 PM - Even though a year has passed, no one is in danger of forgetting Hurricane Maria.

Though initial estimates were that fewer than 100 people perished in the storm's hit on Puerto Rico, officials admitted a few weeks ago that the death toll was many times higher.

As awful as that catastrophe was, it was part of a long tradition of Atlantic hurricanes leaving their mark on history. Here is a look at the eight deadliest on record.

8. The Great Newfoundland Hurricane of 1775

People familiar with the rough seas off Newfoundland won’t be surprised to find a Canadian entry on this list.

As bad as Canada’s hurricanes can be, this storm outstrips them all. As many as 4,000 people were killed by this storm as it raged in mid-September 1775.

Local sources at the time report as many as 700 fishing boats may have been wrecked by the winds and storm surges of more than seven metres that swamped Placentia Bay and other locations.

At least 11 other ships were also lost, including two armed schooners. One account tells of a wreck whose sole survivor was a boy tied to the mast by the crew.

The military losses would have been significant. Bad news for the British, who were dealing with the opening stages of the American Revolution, which began earlier that year.

This monster storm – The deadliest-ever natural disaster to hit Canadian territory, and at the time the deadliest on record – is cited as one of the many factors that eventually led to the British defeat.

The very next year, a storm of unspecified size struck near the town of Pointe-a-Pitre on the Caribbean island of Guadeloupe, killing an estimated 6,000 people.

Given how far in the past this storm was, we have very little concrete information about it (this source claims 60 per cent of a French and Dutch trading fleet was lost), but it’s easy to guess how devastating it would have been to the regional economy.

The Caribbean islands back then, divided into French, British, Spanish and Dutch possessions, were hugely important to the colonial powers, as the source of valuable trade goods such as sugar.

Guadeloupe, for example, was seized by the British during the Seven Years War at around the same time Quebec was conquered as well. After the war, the French were happy to abandon all claim to most Canadian territory, in exchange for getting Guadeloupe back.

Yes: That one island was considered more valuable to France than everything in North America from the Gulf of St. Lawrence through to the Great Lakes and beyond, so when the hurricane hit, it ravaged a powerful trading centre, not a backwater. 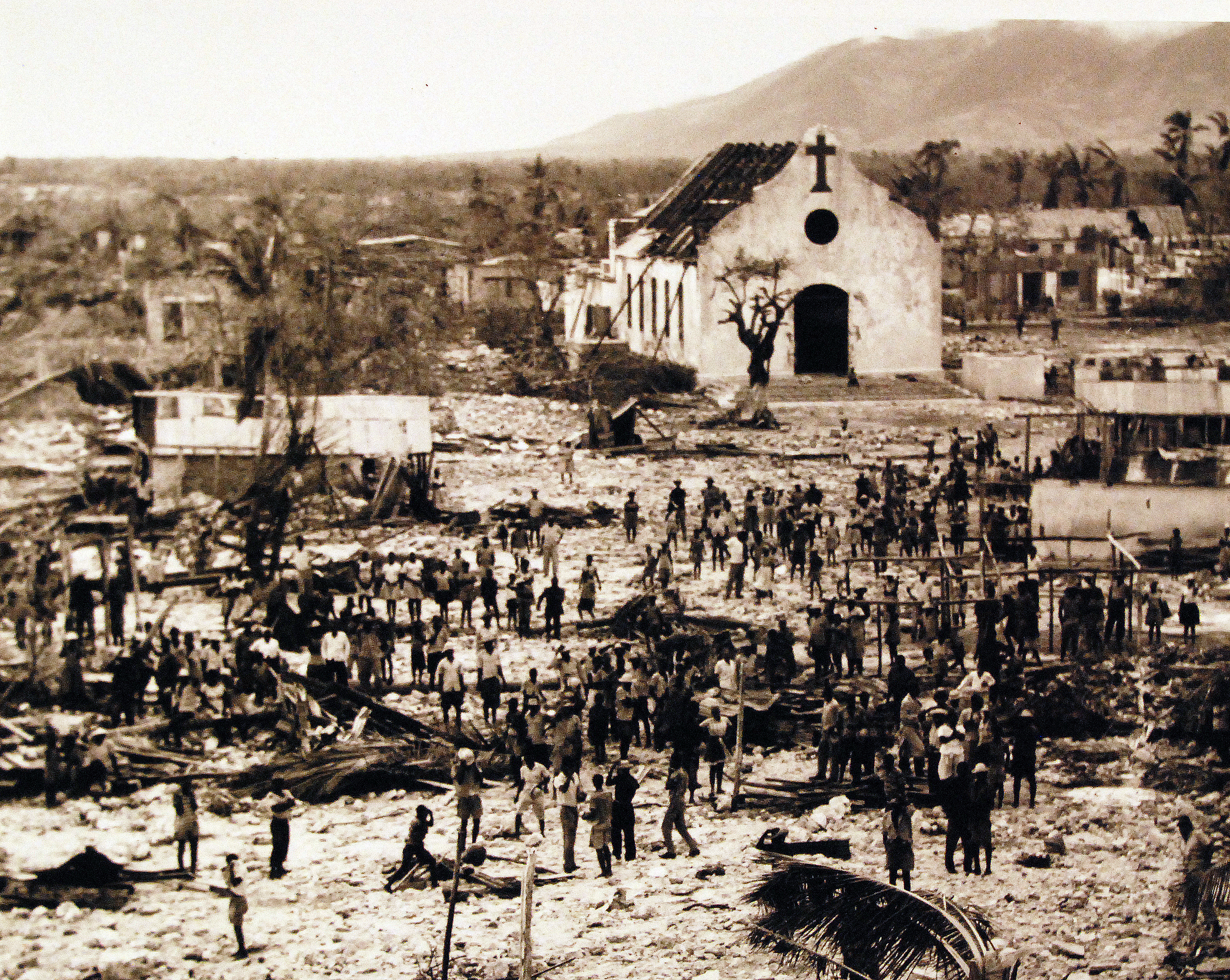 This hurricane, Category 4 at its strongest, hit hardest in Haiti.

Then, as now, it was one of the world’s poorest countries and totally unable to cope with the storm’s sheer force, which included storm surges of up to three metres and almost 2,000 mm of rainfall in at least one location.

Flash floods swamped towns and washed away crops and livestock in Haiti as the storm moved on to neighbouring Cuba.

This source says around 40,000 people had been evacuated ahead of the storm, which by then was boasting recorded winds of more than 200 km/h in some locations.

Despite the preparations, more than 2,000 people were killed as heavy rainfall swelled rivers and wrecked roads and bridges. The Cuban government says parts of the island got more than 2,500 mm of rain, with a single-day total of 719 mm, standing to this day as the most rainfall ever recorded in the country.

Across the entire Caribbean, almost 8,000 people may have been killed, and the storm’s damages topped half-a-billion dollars. 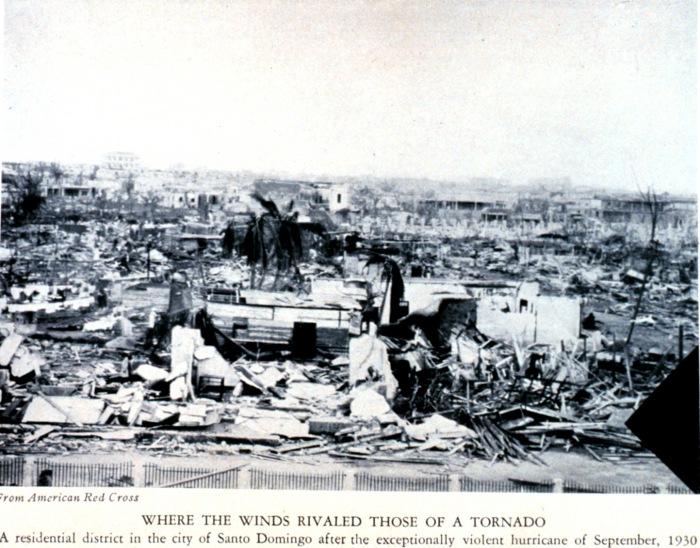 Haiti’s neighbour, the Dominican Republic, also occasionally finds itself in the path of powerful tropical storms, and was itself the target of one of history’s deadliest Atlantic hurricanes.

Sometimes known as San Zenon, it’s hard to tell exactly when the storm formed or how strong it was when it was at sea (this contemporary gathering of accounts gives you an idea of how hard it was to track hurricanes before the invention of weather satellites).

Still, it’s believed to have been a high-end Category 4, and possibly a Category 5, when it reached the island of Hispaniola in early September.

It devastated the Dominican capital of Santo Domingo, killing possibly 4,000 people in that city alone (country-wide, government estimates put the figure at more than 8,000), and wreaked damages of more than $50 million in 1930 dollars.

As an interesting side note, some of the data recorded from the storm came from a steam liner that was struck by the storm, somehow managing to limp into port after having its deck partially stripped by San Zenon’s strong winds.

Hurricane Fifi in Central America followed the familiar pattern of Hurricane Flora in Haiti the decade before – a powerful storm wreaking havoc on a country totally unable to cope with it.

The Category 2 storm made landfall in Belize, raising a storm surge of more than three metres, but it was in neighbouring Honduras where Fifi hit hardest, bringing up to 600 mm of rain to parts of the country.

The rains triggered floods and mudslides through some of the country’s densest-populated areas. The official death toll according to the National Hurricane Centre stands at between 8,000 to 10,000, with up to 4,000 fatalities recorded in a single town swamped by mudslides.

It’s hard to say how accurate the number is, though. A look back at the newspaper sources shows the kind of chaos that follows a natural disaster, with competing accounts putting the number anywhere from the high of 10,000, all the way down to just 1,000.

Regardless of the real number, the economic damage was substantial, estimated at $1.8 billion, with $200 million in agricultural damages alone (up to 90 per cent of the banana crop, the country’s biggest export at the time, was destroyed).

Aid from several countries poured into the region, although a good chunk of it was well meant but misguided. This account tells of tonnes of potatoes left to rot on the docks, along with airdrops of teabags on remote villages.

And as bad as Fifi was, the worst was still to come for Honduras.

3.The Great Galveston Hurricane on 1900

With the first anniversary of Hurricane Sandy looming, it’s easy to forget that the storm’s death toll, while tragic, pales in comparison to storms of the past, even in the United States.

The 1900 storm that swept into Texas remains the deadliest to ever hit the U. S. mainland.

The strong winds and monstrous storm surge hit the town of Galveston particularly hard, completely destroying 3,600 homes and dealing a huge blow to the shipping industry.

Incredibly, there’s actually film footage of the aftermath, apparently from an assistant of Thomas Edison:

The estimated death toll across the state ranges from 8,000 to as much as 12,000, with total damages exceeding $100 billion when adjusted for inflation.

Even so, the city survived, and what followed was a triumph of climate adaptation.

Not only was a large seawall erected, more than 2,100 homes were actually raised up, some as much as 16 feet, to put them out of reach of the worst of future storm surges.

It seems to have worked. When another storm struck in 1915, it did flood parts of the city, but the death toll in the area was only a few dozen, a far cry from the fatalities of 1900.

The deadliest Atlantic hurricane in more than two centuries was also one of the most powerful ever recorded.

A Category 5 storm at its strongest, Hurricane Mitch boasted sustained winds of up to 258 km/h, gusting up to 320 km/h.

Though it had weakened by the time it finally reached Central America, it was yet another monster storm striking a region of the hemisphere that could barely handle it.

The result: More than 11,000 dead, with thousands missing (some estimates put the total at a staggering 18,000), and more than $5 billion in damage.

The blinding rain – more than 1,900 mm in some parts of the region –triggered mudslides and floods that swept away whole villages (this report from NOAA says survivors were trapped on the roofs of their homes for a week after the disaster), along with most of the country’s transportation infrastructure. Around 20 per cent of the population was homeless.


And as with Fifi, the economic impact was also substantial, with almost $1 billion in crop damage.

Neighbouring Nicaragua was also hit, although its death toll of 3,800, while significant, was not as staggering as in Honduras.

The flooding was made even worse as the heavy rains caused the crater lake of the dormant Casita volcano to fill, enough to cause the walls to collapse, triggering mudflows that buried villages several feet deep. It some cases, it took days for the mud to dry enough for survivors to leave for safety.

Even with international aid pouring in, it was believed at the time that recovery could take years.

Mitch lasted long enough to eventually affect Mexico and even Florida, where two people were reported killed. Tornadoes sparked by the storm injured 65 people and damaged or destroyed from than 640 homes.

The storm stands as the deadliest Atlantic hurricane of the 20th Century.

Many of our readers have likely never even heard of this storm. It’s just too long ago and too far away to leave any kind of mark in Canada’s cultural memory.

But you bet people in the West Indies remember the Great Hurricane of 1780 – A ridiculously powerful storm that left a staggering death toll of more than 22,000 people from Barbados to Hispaniola.

There were no real weather observations or satellite monitoring back then, so we only have letters from the time to go by, but they all agree that, in the worst-hit areas, the storm’s winds were strong enough to wipe out even stone houses.

One account says the winds were gusting up to 320 km/h, and stripped the bark of the few trees left standing.

That last story baffles modern meteorologists. Even strong Category 5 Hurricanes haven’t been known to actually strip the bark from trees at that wind speed, so some meteorologists suggest the storm’s winds may have been even stronger than reported.

With winds like that, there was certainly no hope for ships at sea – a big problem for the dominant powers in the region, Britain and France, who were at war as part of the American Revolution.

One account says a British fleet docked at St. Lucia “disappeared,” while in French Martinique, 40 ships carrying 4,000 soldiers went straight to the bottom. On the hardest hit island, troops were killed and barracks and armories were wrecked.

As we look back at Hurricane Sandy, it’s sobering to think that, as damaging and traumatic as the storm was, it wasn’t anywhere near the deadliest storm to emerge from the North Atlantic