Expired News - Curiosity sees hint of Earth-like atmosphere on ancient Mars - The Weather Network
We use cookies on this site to improve your experience as explained in our Cookie Policy. You can reject cookies by changing your browser settings.   READ MORE I ACCEPT

News
Editor's Choice
Canada's Winter Forecast: Your next 3 months of weather!
OUT OF THIS WORLD | Earth, Space And The Stuff In Between - a daily journey through weather, space and science with meteorologist/science writer Scott Sutherland 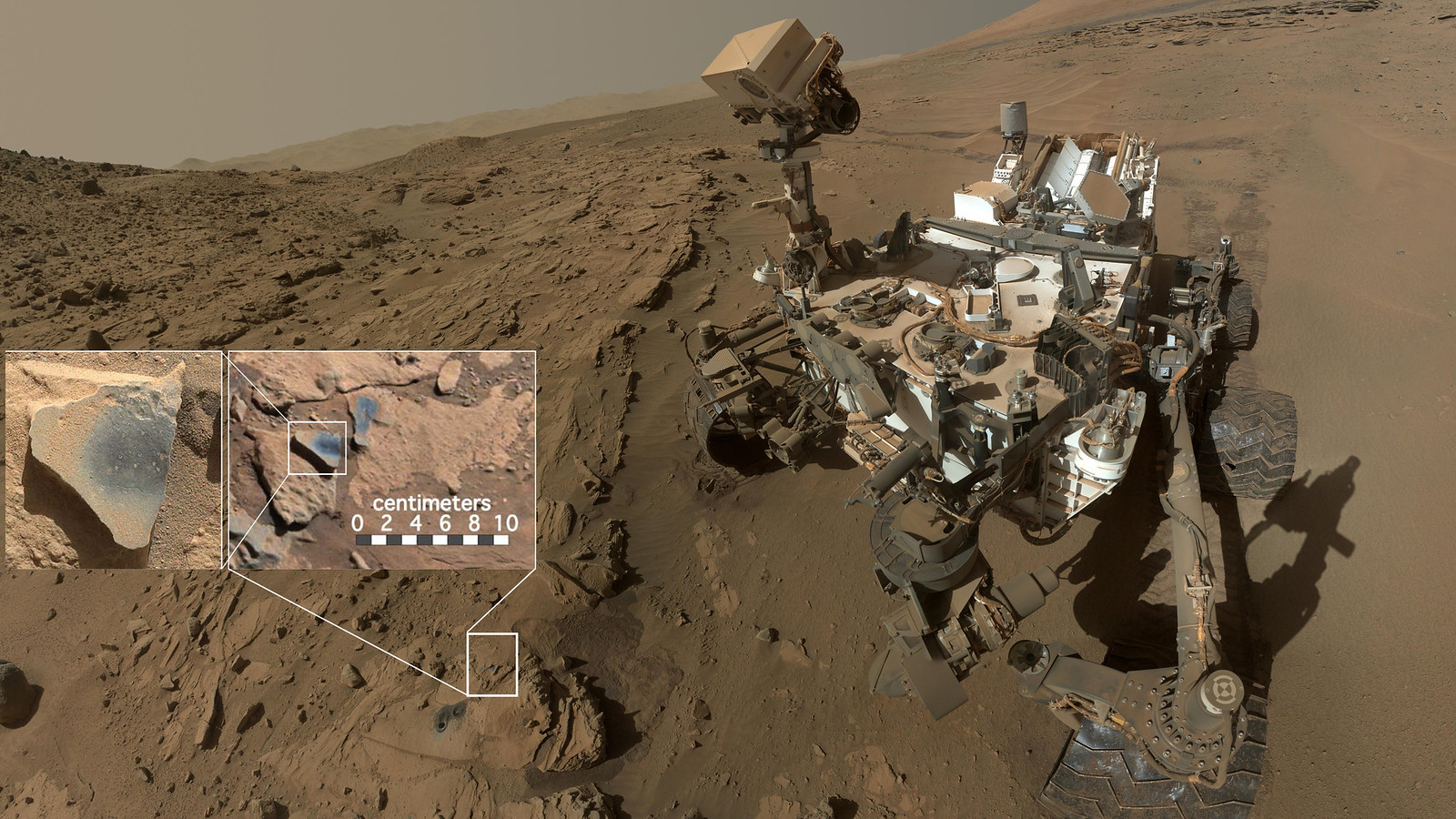 NASA's Curiosity took this selfie while conducting science at the "Windjana" site on Mars, in April and May of 2014. Its investigations turned up evidence of an oxygen-rich atmosphere in Mars' distant past. Credit: NASA/JPL-Caltech/MSSS

Monday, June 27, 2016, 5:51 PM - Did Mars once have an atmosphere rich in oxygen, more akin to what we have here on Earth? That's what the latest find from NASA's Curiosity rover is pointing to, but if so, where did this oxygen come from?

As NASA's 1-ton, nuclear-powered robotic rover trundles across the rocky Martian terrain, it pauses at times to conduct some science - scoop some sand, drill down into rocks or shoot things with a high-powered laser - which has yielded up some truly remarkable discoveries.

One of these discoveries found that Gale Crater, where Curiosity is roving, once held a large lake of fresh water, with just the right conditions that it would actually be drinkable for us.

Now, according to the latest news from NASA, scientists working with data from one of the rover's science "pauses" have found manganese oxide minerals - a type of mineral that only forms in one of two ways:

1) In the presence of liquid water and high concentrations of oxygen, or
2) From microbial life.

"Now we're seeing manganese oxides on Mars," Nina Lanza, a planetary scientist at Los Alamos National Laboratory, said in a NASA statement. "And we're wondering how the heck these could have formed?"

"These high manganese materials can't form without lots of liquid water and strongly oxidizing conditions," Dr. Lanza explained. "Here on Earth, we had lots of water but no widespread deposits of manganese oxides until after the oxygen levels in our atmosphere rose."

According to NASA, here on Earth, manganese oxide minerals are used as a kind of historical marker, since they only appear in the geological record after the atmosphere became oxygen-rich due to organisms using photosynthesis.

This isn't even the first time that manganese deposits have been located on Mars. In 2014, "the jelly donut" rock that the Opportunity rover accidentally dislodged turned out to have manganese in it, and more recently, a combination of Mars Reconnaissance Orbiter and Mars Opportunity investigations found high concentrations of manganese on the ridge of Endeavor Crater, where Opportunity has been investigating.

Given that Endeavor Crater and Gale Crater are roughly on opposite sides of the planet from one another, this lends good support to the idea that these minerals are quite wide-spread. 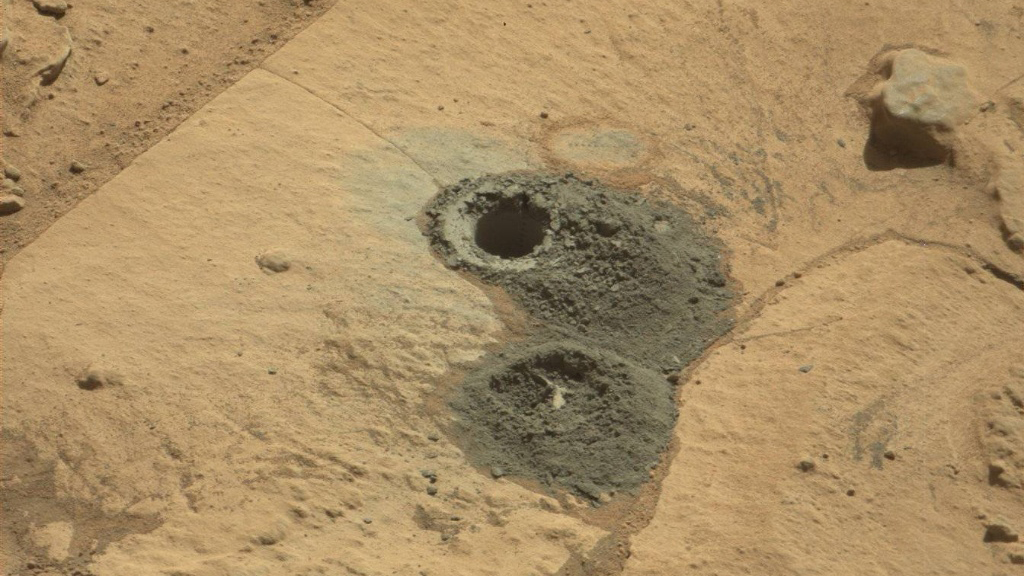 Drill holes made by Curiosity on May 11, 2014. Credit: NASA/JPL-Caltech/MSSS

The fact that there was oxygen on Mars in the past isn't the truly remarkable find here. Given the iron oxide dust that gives Mars the nickname The Red Planet, oxygen had to be there in the past. Studies prior to this have even shown that the planet could have had abundant oxygen in its atmosphere long before Earth did.

According to Dr. Lanza, though, manganese oxide minerals require much higher concentrations of oxygen to form than are needed to oxidize iron - higher levels than were ever thought to have existed on Mars.

So, what could be the source of such high concentrations of oxygen?

Although it's fun to speculate that the high oxygen levels, or even the minerals themselves, may have been produced by ancient Martian microbes, there's probably a safer and simpler explanation.

Since Mars lacks a strong magnetic field now, even if it was stronger in the past, as it weakened, it would expose Mars' surface to an increasing bombardment by high energy particles from the Sun and from space. Now, this bombardment apparently sterilizes the surface to some depth, but back in the ancient past, these particles would have plunged into the oceans, splitting apart water molecules into their component atoms. Mars' gravity wouldn't have been strong enough to keep the hydrogen around. Even Earth's gravity - at 2.5 times stronger than Mars' - is not particularly good at that, with hydrogen only found in the far upper reaches of our atmosphere. The free oxygen, on the other hand, was heavy enough to be bound to Mars longer, thus being around to produce both the iron oxide dust and these manganese oxide minerals.

One thing to note is an important point made by Dr. Lanza: "It's hard to confirm whether this scenario for Martian atmospheric oxygen actually occurred. But it's important to note that this idea represents a departure in our understanding for how planetary atmospheres might become oxygenated."

This may be a new piece of the puzzle to add to our overall knowledge of how planets and their atmospheres form, or it may actually be a step towards the discovery that life actually existed on the Red Planet at some point in its past.

The next step, according to the Los Alamos National Laboratory, is for the researchers to see if there is any discernible difference between manganese oxides produced through biological processes and those that arise from simple geological processes.

If that distinction can be made, it will be interesting to learn exactly where this particular puzzle piece fits in.