Expired News - Commuters catch amazing fireball blaze across Ontario sky - The Weather Network
We use cookies on this site to improve your experience as explained in our Cookie Policy. You can reject cookies by changing your browser settings.   READ MORE I ACCEPT

News
Editor's Choice
A summer scorcher ahead? Canada's July forecast, here
Who saw this one?! Dashcam footage and all-sky cameras caught an amazing long-lived fireball meteor early Friday morning! It must have been seen by hundreds, if not thousands of people, though! Were you one of the lucky ones?
OUT OF THIS WORLD | Earth, Space And The Stuff In Between - a daily journey through weather, space and science with meteorologist/science writer Scott Sutherland

Friday, October 7, 2016, 11:55 AM - Who saw this one?! Dashcam footage and all-sky cameras caught an amazing long-lived fireball meteor early Friday morning! It must have been seen by hundreds, if not thousands of people, though! Were you one of the lucky ones?

At around 6:45 a.m. EDT, Friday, October 7, a particularly resilient piece of space rock entered Earth's atmosphere over Georgian Bay, and blazed a bright trail across the predawn sky.

Reports submitted to the American Meteor Society - 165 at last update - have come in from locations throughout southern Ontario, and as far away as Kalamazoo, MI, Columbus, OH, and around Syracuse, NY. 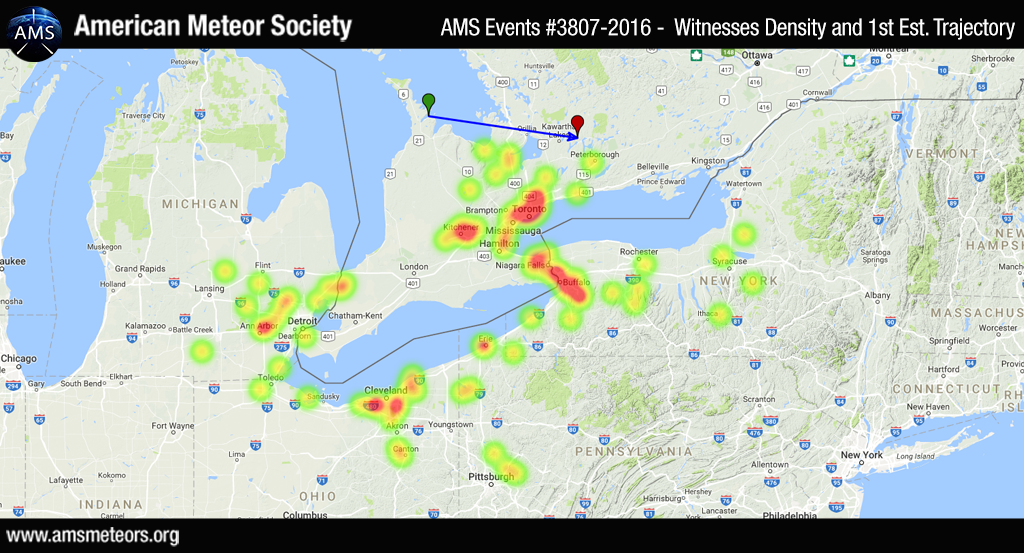 Heatmap for reports of the Oct 7 AM fireball. Credit: AMS

Peter Brown, a meteor scientist at the University of Western Ontario, found that the university's network of all-sky cameras had captured a spectacular view of this meteor as it passed overhead.

Youtube user DrClockSmasher also caught this one, as he was riding his motorcycle through northeast Metro Detroit.

Another all-sky camera, this one from the E.C. Carr Astronomical Observatory, located between the Blue Mountains and Beaver Valley, near Georgian Bay, captured the event as well.

Peter Brown commented in a followup tweet that this was great timing, as it was caught just before the camera shut off this morning.

Is something weird going on?

As this is the third major fireball event in the past two weeks or so, it's understandable if someone may think something unusual is happening in our skies. A quick look at the AMS Fireball Log webpage, however, shows that there have been 50 reported events in just the past few days. A few are brighter, and thus seen by many people, but the majority are minor events, reported by fewer than 10 observers. Also, checking the trajectories of these events, they come from pretty much every direction.

Another fireball was reported by over 30 people early Thursday night, passing over the Quebec-Maine border. It was travelling roughly east to west, though, compared to the west-to-east pass of this morning's meteor. This could indicate that the two are related, perhaps two pieces of debris from the same meteor shower, but that's by no means a certainty.

According to the American Meteor Society, it's estimated that several thousand fireballs flash through the sky every day. Most happen during the day, over the oceans, over unpopulated areas, or are obscured from view by cloudy weather, so they are just not seen by anyone.

It's pure luck that we have one - especially a bright one - pass over a well-populated region, during the night, with clear skies. It's even more of a boon if there are cameras pointed in the right direction!

Did you see it?

Did you happen to see this one? If you did, please leave a comment below, describing what you saw, and then head over to the AMS website and report it, so that they can get the best account of the event possible.

Watch Below: See Marcel Marquarrdt's full recording of this amazing fireball meteor, as he saw it from Cambridge, ON.