Expired News - The Internet and climate change denialism - The Weather Network
We use cookies on this site to improve your experience as explained in our Cookie Policy. You can reject cookies by changing your browser settings.   READ MORE I ACCEPT

The Internet and climate change denialism

Friday, September 14, 2018, 2:10 PM - Many online users can access credible, scientific resources that provide the most accurate knowledge of climate change, whereas others can create worlds of conspiracies and misinformation.

A person's Internet activity can say a lot about what's on their mind, their interests, and concerns. The Google search bar opens up a portal to endlessly stream any type of content that could be imagined and can connect people to other people, ideas, and data. Online access is a critical means for sharing and understanding scientific knowledge, and scientists, politicians, corporations, and anyone with an Internet connection can contribute to the climate change discourse. How does this affect one's access to factual, science-based climate change information?

"Don't believe everything you read on the Internet" is fairly sensible advice. As long as a person can afford to connect online they can post any content they desire, and can take great strides to ensure their postings and anonymous and untraceable. Spooky chain mail, the Montauk Monster, and the Pizzagate Conspiracy are just some examples of how this online freedom can be used to spread false information that could cause widespread confusion and fuel unrelenting conspiracy theories. Despite the broad consensus amongst climate scientists that the observed warming and changes in the atmosphere are being caused by human-released greenhouse gases, there is evidence that some climate skepticism is generated by denial and conspiracy theories expressed on the Internet.

At least 97 per cent of actively publishing climate scientists agree that the abnormal warming trends have been induced by human activity, but the wide gap between the scientific community and public opinion is particularly apparent on different corners of the Internet. Accusations of institutions tampering with climate data, over-exaggerating risk, and pushing a political agenda are just some of the most common explanations skeptics cite for rejecting human-caused climate change.

People are spending more time on social media and also turning to it as a source of news - nearly half of Canadians and more than two thirds of Americans receive news through social media. While a number of media platforms are highlighting their efforts to manage the spread of misinformation and false news on it’s platform, users typically select and interact with content that supports their existing viewpoints and can create customized informations feeds pertaining to these topics, which are commonly reinforced by algorithms to optimize future content based on the user's preferences. Research shows that search engine results will favour commonly repeated keyword searches over time, even for scientific issues, which can limit a user's exposure to the rest of the topic’s content and viewpoints.

Customizing your timeline could still allow for climate change updates, but they might not come from the most valid sources. In fact, the groups and institutions providing a lot of online climate change resources are not necessarily representative of the academic, peer-reviewed work that actual climate scientists produce. One study states that climate scientists and scientific institutions are not the major players in online communications regarding climate change and related politics - it is the climate and environmental NGOs that are deemed the champions of online climate communications because they seek to provide information, address news media, change behaviour, and mobilize action. 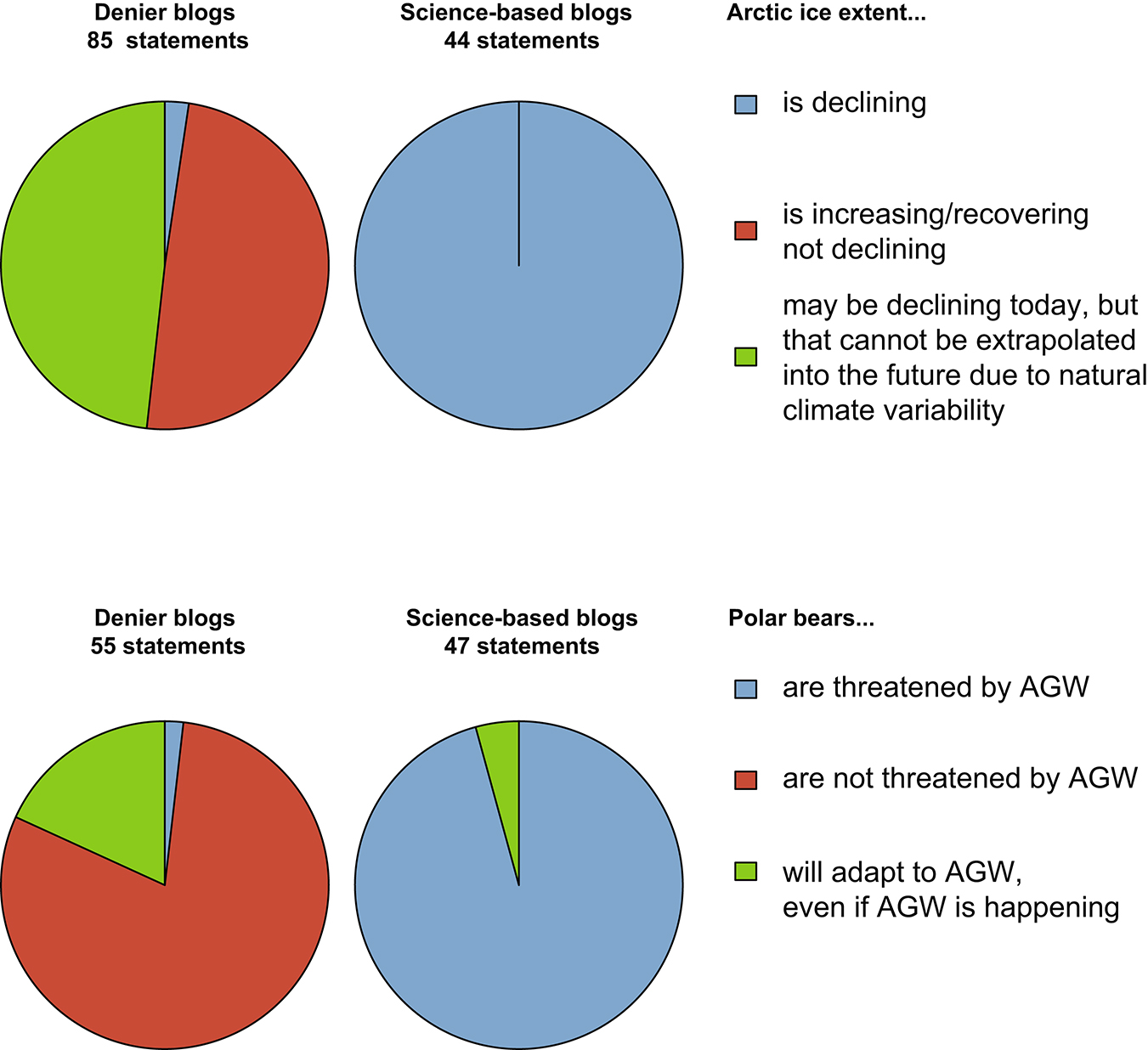 Anthropogenic global warming (AGW) is has been scientifically proven to impact Arctic sea ice and polar bear populations, yet climate skeptics and deniers refute these claims. These charts show the percentage of 45 science-based and 45 denier blogs expressing their differences. Credit: Harvey et. al. (2018)

Another study explains that the climate consensus gap is partly caused by social media outlets representing climate change as a "scientific controversy with opinions on both sides" because it could be more profitable for advertisers, and the corporate media might could choose to steer away from overemphasizing the magnitude of climate change to avoid conflict with advertisers.

The complexity of scientific journals, restricted access to data and resources, and field-specific jargon all contribute to this persistent climate consensus gap between the scientific community and public opinion. The Internet is largely used to share information and connection with other people and this study notes that while online media forums encourage diverse expression of opinions, they do not do a good job at "supporting evidence, logical deliberation," because they are typically aired in "a limited and unstructured manner" that can be difficult to crosscheck.

WHERE ARE PEOPLE MOST CONCERNED ABOUT CLIMATE CHANGE?

The concern of climate change and the action taken to fight it varies geographically. Social media can tell a lot about how audiences perceive and react to climate change news, and users data shows what regions are most concerned. Studying users online data has been used extensively in other fields as an "early warning" system to predict disease outbreaks, future product services or demands, and understanding public opinion of various social issues. A study that analyzed geographic data from Google users reveals a positive relationship between a country's climate vulnerability and online awareness of climate change, and that individuals in countries that ranked 'at risk' from climate change, such as Fiji and South Africa, Google searched terms related to climate change more than 'low risk' countries, such as the United States.

Despite these classifications, all countries have something to lose from climate change. A 'low risk' country such as the United States is already seeing deathly heat waves, an increase in extreme weather event frequency, and dramatic changes to natural resources, while other nations like Kiribati are disappearing right now from sea level rise. Digital trends and content provide insight for why rampant online climate denial and skepticism persist and depict the magnitude of the problem felt amongst online users. Whatever the reasons are for rejecting widely accepted science-based, peer reviewed research, the denialism and inaction of some nations has significant consequences for many around the world.