Expired News - China's Chang'e 4 has grown the very first plant on the Moon - The Weather Network
We use cookies on this site to improve your experience as explained in our Cookie Policy. You can reject cookies by changing your browser settings.   READ MORE I ACCEPT

Wednesday, January 16, 2019, 1:17 PM - China has grown plants on the far side of the Moon, New Horizons sends back an amazing 'approach' movie of MU69, and NASA telescopes spot a mysterious explosion nicknamed 'The Cow'. It's What's Up In Space!

THE FIRST PLANT GROWN ON THE MOON!

When China's Chang'e 4 landed in early January, it was the very first mission to touch down on the far side of the Moon, but now it has accomplished another 'first'.

Tucked away inside the lander is a small air-tight biosphere chamber, which contain cotton seeds, rapeseed, potato seeds and arabidopsis seeds, which the Chinese hoped would germinate and grow while on the lunar surface. It also contained yeast and fruit flies, to judge if these organisms could survive.

As of Tuesday, it was revealed that the cotton seeds have begun to sprout, becoming the first plants to ever grow on the surface of another astronomical body. 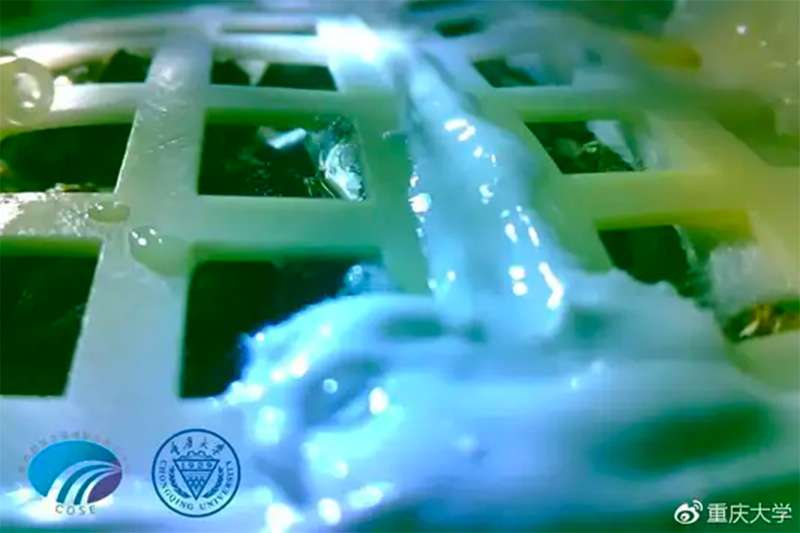 Plants have been spotted sprouting in Chang'e 4's sealed biosphere experiment. The green cotton leaf can be seen just left of centre, in the image above. Credit: Chongqing University

According to the South China Morning Post, Professor Liu Hanlong, who leads this experiment, said that cotton was the first to grow sprouts. It is unclear, at this time, if any of the other plants also sprouted. The South China Morning Post reports that the other seeds were spotted growing as of Saturday, however another report by China's state-run Xinhua News Agency stated that no other plants were found growing.

Unfortunately, even with the excitement of the announcement, this experiment is apparently already over.

According to Xinhua, on Sunday, lunar night fell over the region where Chang'e 4 is, plunging the lander, and its tiny biosphere, into temperatures down to -170°C. This put the lander into 'sleep mode', and according to Professor Xie Gengxin, of Chongqing University, who is the chief designer of the experiment, the life in the canister is not expected to live at those temperatures for the roughly two-week-long lunar night.

From the Xinhua report, the China National Space Administration has said that the biosphere will remain sealed as the organisms inside decompose, so it does not contaminate the lunar environment.

Also, while the chances are slim, it will be interesting to see if some of the seeds in the biosphere, which had not yet germinated, actually survive to sprout during the next lunar day.

As it drew closer, the probe's cameras were snapping away, hoping to capture the best images possible of this distant object, so that scientists might get enough to study it in detail.

Their latest releases show us what New Horizons saw, on approach:

In addition, the montage below shows the individual images that went into both of the animations, above.

We still have months of waiting before we get all the data, and probably at least weeks before we start to see some of the best imagery downlink from the spacecraft, but what we're seeing so far is a tantalizing hint of what's to come!

THE MYSTERY OF 'THE COW'

There are a LOT of weird things going on out in the universe, and recently, NASA telescopes caught one in 'mid-happening'.

Some 200 million light years away from us, in the constellation Hercules, there's a fairly nondescript galaxy that goes by the name CGCG 137-068. Back on June 16, 2018, telescopes recorded an event that was labelled AT2018cow, and subsequently became nicknamed "The Cow". 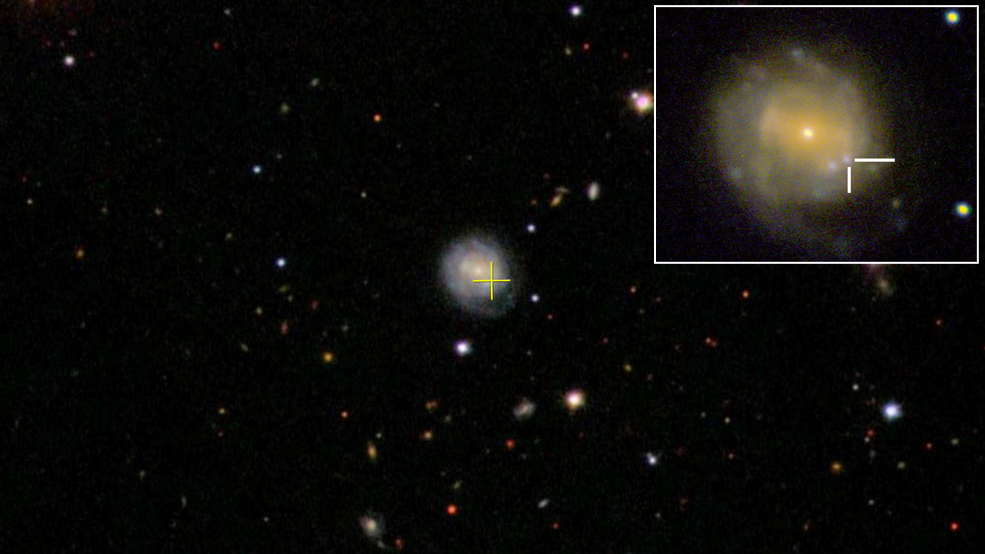 Galaxy CGCG 137-068, with crosshairs indicating the location of AT2018cow, aka "The Cow". The inset is a closer view of the galaxy, with the lines pointing to the location of The Cow. Credit: Sloan Digital Sky Survey/Scott Sutherland

What was so noteworthy about this event?

Although it may have appeared to be a kind of supernova, to start, research teams investigating it discovered that it was highly unusual. It was at least 10 times brighter than your typical supernova, and it took a few months to fade, as opposed to a few years.

Unlike anything they'd seen before, it took some work to determine what could have possibly caused this unusual explosion.

One possibility? A black hole eating a white dwarf star.

One potential explanation of the Cow is that a star has been ripped apart in what astronomers call a "tidal disruption event." Just as the Moon's gravity causes Earth's oceans to bulge, creating tides, a black hole has a similar but more powerful effect on an approaching star, ultimately breaking it apart into a stream of gas. The tail of the gas stream is flung out of the system, but the leading edge swings back around the black hole, collides with itself and creates an elliptical cloud of material. According to one research team using data spanning from infrared radiation to gamma rays from Swift and other observatories, this transformation best explains the Cow's behavior.

"We've never seen anything exactly like the Cow, which is very exciting," said Amy Lien, a co-author of one of the papers describing The Cow, from the University of Maryland and NASA's Goddard Space Flight Center, according to a NASA press release. "We think a tidal disruption created the quick, really unusual burst of light at the beginning of the event and best explains Swift's multiwavelength observations as it faded over the next few months."

There may be another explanation, though.

Another team of researchers, led by Northwestern University astrophysicist Raffaella Margutti, caught the event at different wavelengths, including x-rays, and believe that in spotting the flash from AT2018cow, they may have actually watched the real-time creation of a black hole or neutron star.

Their reason for the unusual appearance of The Cow?

According to NASA, the expanding cloud of debris that is blasted out around a typical supernova initially blocks astronomers from seeing the black hole or neutron star remnant that's left over after the explosion. It's only after the cloud has expanded for some time that it becomes possible to view the remnant. With AT2018cow, it's possible that this particular star only produced a thin debris cloud, so astronomers were able to look straight through to the newly formed remnant, and watch it consume some of the material closest to it.

Three different views of The Cow. A 2003 image from the Sloan Digital Sky Survey (left), with a green circle indicating where The Cow appeared in 2018, a June 20, 2018 image from the Liverpool Telescope in the Canary Islands, close to the event’s peak brightness (centre), and a high-resolution image from the William Herschel Telescope, also in the Canary Islands (right), taken in July 2018, after the event had faded enough that the host galaxy came back into view. Credits: Daniel Perley, Liverpool John Moores University

"We saw features in the Cow that we have never seen before in a transient, or rapidly changing, object," Margutti told NASA. "Our team used high-energy X-ray data to show that the Cow has characteristics similar to a compact body like a black hole or neutron star consuming material. But based on what we saw in other wavelengths, we think this was a special case and that we may have observed - for the first time - the creation of a compact body in real time."

"If we're seeing the birth of a compact object in real time, this could be the start of a new chapter in our understanding of stellar evolution," co-author Brian Grefenstette, a NuSTAR instrument scientist at Caltech, told NASA. "We looked at this object with many different observatories, and of course the more windows you open onto an object, the more you can learn about it. But, as we're seeing with the Cow, that doesn't necessarily mean the solution will be simple."