Expired News - Why Vancouver keeps slipping as Canada's most liveable city - The Weather Network
We use cookies on this site to improve your experience as explained in our Cookie Policy. You can reject cookies by changing your browser settings.   READ MORE I ACCEPT

Why Vancouver keeps slipping as Canada's most liveable city

Thursday, September 6, 2018, 2:47 PM - Vancouver residents felt a sting to their sense of urban pride when they saw the news that their city had lost to Calgary in a ranking of the world’s best cities by The Economist magazine. The magazine creates the index for their professional, globetrotting demographic.

The Economist’s “Global Liveability Index” by The Economist Intelligence Unit (EIU) surveys and analyses 140 cities using both objective and subjective measures including qualities they believe to be important to have a nice day. Categories include stability, health care, culture and environment, education and infrastructure. Vancouver won top global bragging rights for four years in a row, starting in 2007.

Back in 2011, Melbourne beat us out; Melbourne is the kind of city that Vancouverites might call an “esteemed peer.” Vancouver and Melbourne could be considered cities of the same kind: with waterfronts designed for recreation, and an economy fuelled more by café culture than by industrial parks and a commitment to “green.” But this is the first year Vancouver did not receive the top ranking among Canadian cities.

Calgary, the city that beat Vancouver, is the poster city of suburban sprawl. Oil-guzzling is a sport as Calgary continues to absorb growth by expanding into the hinterland.

Although the trend may be starting to turn around, Calgary has long led the pack of Canadian cities with a high percentage of residents living in car-dependent suburbs.

Calgary’s economic development engine is not the knowledge-based high tech sector, not services, not manufacturing; it is primary resources. Conventional energy extraction accounts for nearly one-third of Calgary’s GDP, according to Calgary Economic Development. How could Vancouver have changed so much that Calgary is now considered “more livable?”

The reason given for relegating Vancouver to sixth place this year, and elevating Calgary to fourth place is “stability.”

Vancouver has been ecodensifying for over a decade. In his end-of-career address to the Canadian Institute of Planners in 2004, the former co-director of planning for the City of Vancouver, Larry Beasley, attributed the success of Vancouver’s model of urban planning to its neighbourhood scale.

This type of planning ensured widespread citizen participation and built a “living first” downtown. The premise was that good jobs would follow a good place to live. Also, they valued urban design which in turn valued sustainability and social equity.

Beasley boldly claimed that if other Canadian cities could learn these lessons too, Canadians would become “true experts at city building” for the world to follow. And for a decade or so, cities from Brampton to Dallas to Abu Dhabi followed the Vancouver model, and the truth of Beasley’s conviction became self-evident.

But now, according to the economic elite, the Vancouver way is threatening investor confidence in the stability of the democratic process in Canada.

Alberta has taken offence to the civic and political opposition to the pipeline. Alberta Premier Rachel Notley threatened to block refined petroleum shipments to B.C. and wine shipments from B.C. to Alberta. Others accuse B.C. of being one provincial government that is, “holding another to ransom.”

The dark side of Vancouver’s livability agenda is rearing its head. The cost of land and housing have skyrocketed, leaving a very different picture of “living first downtowns.” At the same time as they grow in popularity, support and enthusiasm for higher density neighbourhoods and attached housing is tempered by growing negative associations.

These negative issues include: lack of affordability, polarizing class dynamics, crowding, loneliness, social isolation, dysfunction, drug abuse, lack of neighbourliness and community life. There is also concern about risks to cities in the future, from deteriorating air quality (notably, from forest fires) to flooding and other climate change-related risks.

Add to this the wild cards of the upcoming municipal elections in Vancouver. These crises make clear that there are flaws in the Vancouver model of urban livability. They factor into a shifting sense of Canadians’ support for, and hesitancy about, the value of compact urban living and the value of Vancouver’s planning wisdom.

The EIU analysts admit that the difference between the cities at the top of its list is small. In the midst of a lethal drug crisis and affordable housing shortage, is livability good enough in Vancouver to even merit a sixth place finish?

A REVERSAL FOR WHAT MAKES A CITY LIVEABLE

Aside from that, however, what the reversal in ranking between Vancouver and Calgary signals is a reversal of rules for what makes a city livable in the eyes of the global elite.

These EIU ranking results signal that the stakes are much higher than local; the world’s economic elite are watching. And they lack a feeling of “stability.” 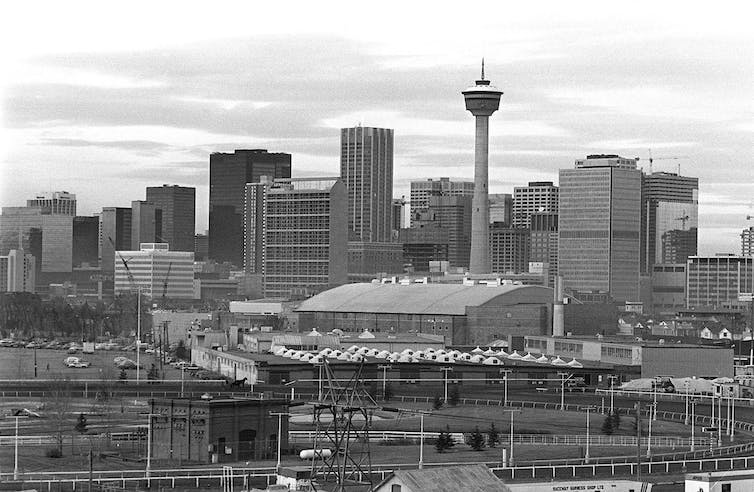 It signals that the Vancouver model of urban development, once the halcyon of livability and the model for all others to try and follow, is not losing ground because of its starry eyed optimist views, a “Mayor Moonbeam” parody of its own reality. Nor is it losing ground because its leadership is “too cozy with developers.”

Vancouver is losing ground in the minds of the global elite for the most existential of reasons. It is a model of neighbourhoods as the building blocks of planning, where the neighbours are invited and expected to have a voice. Compared to Calgary, this appears to be a marker of instability, to the extent that they cannot predict how much Alberta oil the city is willing to act as throughput for.

In other words, Vancouver is losing ground because its planners have been laying the political, economic and cultural groundwork for an urban economic alternative to primary resource extraction and expansionist oil-dependent suburbanization.