Expired News - 13 of Canada's deadliest, most destructive tornadoes - The Weather Network
We use cookies on this site to improve your experience as explained in our Cookie Policy. You can reject cookies by changing your browser settings.   READ MORE I ACCEPT

13 of Canada's deadliest, most destructive tornadoes

Tuesday, August 28, 2018, 12:32 PM - The Manitoba community of Alonsa is reeling from the death of a 77-year-old man, killed by a powerful tornado that caused widespread damage in its wake when it touched down on Friday, August 3.

The tornado, rated EF-4 on the Enhanced Fujita scale, is the strongest in Canada in 11 years, and also the first since 2011 to result in a fatality.

Though not as known for it as the U.S., Canada is a tornado-prone country, with an annual average of 62 twisters, mostly common in Saskatchewan (18), Alberta (14) and Ontario (13). These powerful forces of nature can claim lives, wreck communities and otherwise scar the cultural memory of the nation.

Below is a selection of tornadoes that, due to death toll, strength, location, or rarity, have made their mark in Canadian history.

Though any loss of life due to natural disaster is to be mourned, tornado deaths are rare in Canada, and death tolls in the dozens are rarer still.

But "rare" of course does not mean "non-existent," and more than a century ago, a bustling Prairie capital was the scene of the nation's highest tornado death toll.

Canada’s deadliest-ever tornado rolled into Regina on the afternoon of June 30, 1912.

It wrecked or damaged hundreds of buildings and left 28 people dead, more than 300 injured, and more than 1,500 homeless, it what was then a city of only 30,000 people.

The community had to shoulder the heavy burden of reconstruction, with damage estimates ranging from $1.2 million to as much as $4 million, a staggering sum a century ago that would be the equivalent of hundreds of millions of dollars today.

The tornado that ripped through the Manitoba town of Elie on June 22, 2007, is the most powerful ever recorded in Canada – and when the dust settled, not a single person had been killed or seriously injured.

That didn’t mean no damage was done. Tens of millions of dollars in damages was done to this town of roughly 500 people. In fact, the sheer scale of the wreckage -- whole houses were lifted off their foundations and vehicles tossed hundreds of metres – helped Environment Canada estimate the winds at more than 420 km/h, earning the tornado an F5 classification.

So far, it’s the only such recorded tornado in Canadian history, and one of around 60 such twisters recorded in North America since 1950. Environment Canada says tornadoes that strong account for less than one tenth of one percent of the North American total.


People in Alberta and the Prairies know their provinces’ tornado risk, but even so, the tornado that tore a path through eastern Edmonton was beyond the pale.

The F4 tornado was on the ground for around an hour, scarring the face of one of Canada’s largest cities. When it was over, the death toll was twenty seven -- the nation's second-deadliest -- with more than 300 injuries and thousands homeless, not to mention damages of more than $300 million in 1987 terms. It was one of the worst natural disasters ever to befall Alberta, and Canada, and likely the country's most expensive tornado disaster in terms of the dollar value of damage done.

In the wake of the destruction, the Alberta government proposed and implemented the Emergency Public Warning System, which operated until 2011, when it was replaced by Alberta Emergency Alert.


Ontario’s deadliest-ever tornado touched down in the afternoon of June 17, 1946. It only lasted a few minutes, but it left an almost 60 kilometre-long path of destruction in a busy border area of the U.S. and Canada.

Based on damage estimates from the time, the twister was estimated to have been about F4 strength, wind winds of between 333 to 418 km/h. Among the ruins of the hundreds of destroyed homes were 17 fatalities, and hundreds of people were injured.

It narrowly missed the Windsor airport, but it did damage the printing offices of the Windsor Star. Still, the paper went out, thanks to their colleagues at the Detroit News, who allowed the Windsor paper to print its edition on their own printing presses.

If that wasn’t enough, the city was again struck by a major tornado, an F3 that was spawned by the super-outbreak of April 1974 that claimed more than 300 lives in the U.S. and Canada. In Windsor, the death toll stood at nine people, killed when the twister struck a curling club.

THE TORNADOES OF QUEBEC

Environment Canada says Quebec averages around five tornadoes a year, which is less than other parts of Canada that are considered tornado hot spots.

Still, they do happen, with deadly consequences, and sometimes on the doorstep of the province’s major cities.

One twister that began in Lancaster Township in Ontario and ended in Salaberry-de-Valleyfield, Quebec, may have killed as many as 11 people on August 16, 1888, one of  Canada’s highest tornado death tolls.

And in 1870, a tornado is reported to have hit Montreal, at the time Canada’s largest city. Several industrial buildings were damaged, and one person, a boy on a bridge across a canal, was reported killed, although that was not confirmed. 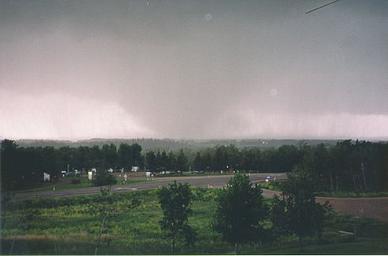 The second deadliest tornado death toll in Alberta happened when an F3 tornado, boasting winds of between 254 to 332 km/h, ripped through a trailer park and camp ground in Pine Lake, central Alberta.

A total of 12 people lost their lives on July 14, 2000, as the twister tore through the park, with more than a hundred injured.

As a cruel reminder of what happened, another, much weaker tornado touched down a few weeks later in nearby Elnora, although no one is reported to have been killed or injured there.

The death toll in the wake of the F3 tornado that struck Sudbury and nearby communities on August 20, 1970, wasn’t the most significant in Canada or even in Ontario (Windsor lost 17 and 9 people in two separate outbreaks in 1946 and 1974, while 12 Ontarians died in a 1985 storm, including eight in Barrie).

What made the Nickel Belt twister unusual is its relatively northern latitude. Although in real terms, it’s actually further south than the very active tornado zone of the southern Prairies, tornadoes of that strength are considered very rare in northern Ontario.

As it was, it left six dead, and hundreds injured around the Sudbury area. Three hundred homes in the community of Lively were damaged or destroyed, while elsewhere, in Field, half of the community’s 600 homes were damaged beyond repair.

At a reported five deaths, the tornado that hit the small seaside town of Bouctouche is the deadliest in New Brunswick's history, but we’ve also included it more because of its unlikely location.

New Brunswick, and Atlantic Canada in general, are far beyond Canada’s commonly known tornado zone in the south of Quebec, Ontario and the Prairies.

The region might see a few weak tornadoes, but there’s usually only a 10 per cent chance a severe thunderstorm will produce a tornado in Atlantic Canada.

The people of Bouctouche were on the wrong side of the odds, with deadly consequences, proving that tornadoes can happen anywhere in Canada, so long as the conditions are right.


At least seven tornadoes touched down in Ontario on May 31, 1985, resulting in 12 deaths and hundreds injured or left homeless.

By far the strongest and most damaging was a single F4 twister that tore through the Barrie area. Leaving behind a damage path 5 km long and up to 600 metres wide within the city limits, the twister killed eight people, and damaged more than 600 homes, a third so badly as to be left uninhabitable.

Aside from the deaths, the region's economy took a major hit as well. Some 150 farms were damaged, and within the city itself, 16 factories were destroyed, putting hundreds of people out of work. In all, some $83 million in damage was inflicted by this tornado, one of the deadliest in Ontario history.


At F3 strength, this was the strongest tornado to hit Ontario in the 21st Century. When it roared ashore on August 21, 2011, it did extensive damage to the community of Goderich, killing one person and injuring almost 40 others. The damage to Goderich’s buildings, many of them a century or more old, totalled as much as $100 million.

Aside from its strength, one of the reasons this tornado makes our list is because despite the unexpected nature of the tornado – a tornado warning was issued only 12 minutes before it made landfall – and its sheer strength, the death toll was still very low.

Social media and television reporting played a big role in getting the word out, and the disaster spurred the Municipality of Central Huron, which includes Goderich, to look into ways to improve tornado warning systems.

WATCH BELOW: HOW TO SURVIVE A TORNADO