Expired News - Canada as cold as Mars? Is this for real? Well, yes, and no - The Weather Network
We use cookies on this site to improve your experience as explained in our Cookie Policy. You can reject cookies by changing your browser settings.   READ MORE I ACCEPT

Canada as cold as Mars? Is this for real? Well, yes, and no

Wednesday, January 30, 2019, 8:20 PM - With a severe blast of Arctic cold pushing down over most of Canada this week, the comparisons with Mars have started popping up again. Is this for real, though? Is it really as cold as Mars across parts of Canada? Well, yes, and no. Let's break it down.

Note: This article was first published on December 29, 2017. It has been updated.

Temperatures across much of Canada and the U.S. Midwest have plunged due to a lobe of the polar vortex dipping far south over North America. From Quebec to Saskatchewan, on the afternoon of Wednesday, January 30, temperatures were well below freezing, bottoming out in southern Manitoba at around -30°C (not including the wind chill)! 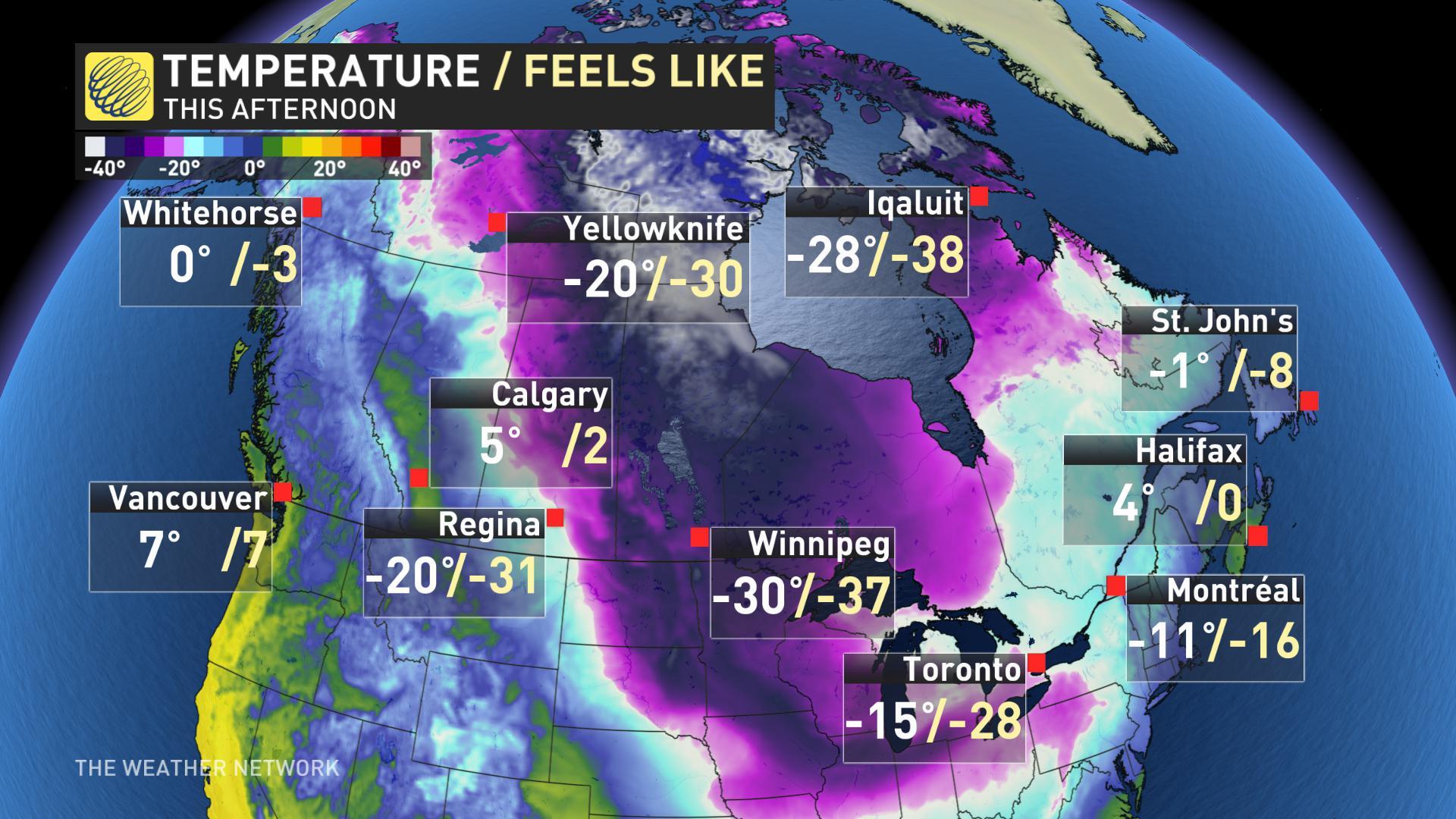 We don't even have to delve into the fictional - say with Star Wars' planet Hoth - to get a good comparison for this kind of frigid weather.

Conveniently, NASA has a weather station positioned on the our next door planet, roughly 75 million km farther from the Sun than Earth. The Curiosity rover, which is located in Gale Crater, on Mars, has been sending back daily weather readings since August 2012.

The Rover Environmental Monitoring Station (REMS) is a pair of sensors, positioned on Curiosity's mast, that gather weather data, and we can see daily records of air temperature, ground temperature, UV radiation and atmospheric pressure from REMS. The instrument also gathers humidity data, which is used in scientific research, and it was designed to measure wind direction and speed as well, but damage to one of the two sensors during landing prevents reliable wind measurements.

Curiosity records both air and ground temperature separately, by directly sensing the air around the REMS instrument, about 2 metres above the ground, and by measuring the infrared radiation emitted by the ground. It does this to keep a running track of them both, as there is typically a significant difference between these two values, especially during the day.

On Mars, the ground and air are heated by the same processes we see in action here on Earth. Sunlight directly warms the ground. That heat is directly transferred to the air molecules closest to the ground, which sets up convection in the air, while the ground also emits infrared radiation, which is absorbed by greenhouse gases in the air.

There are a some big differences for Mars, though. First, the sunlight isn't as intense, due to Mars being an average of 75 million km farther away from the Sun, so there's less energy being absorbed by the ground. Second, the surface is barren, with no plants or bodies of liquid water to absorb and retain heat. Third, Mars' atmosphere is extremely thin compared to Earth's, with an average atmospheric pressure of 6 millibars, compared to Earth's average of 1013 millibars, and that extremely thin air is mostly concentrated very close to the ground.

So, compared to what happens on Earth, less heat is stored in Mars' surface, the thin air conducts less of that heat away from the ground and absorbs less of the infrared radiation emitted by the ground, and what heat is transferred to the air mostly stays in the air right next to the ground. Thus, if you measured the temperature at 1 metre and 2 metres above the Martian ground, the air at 2 metres up is going to be significantly colder.

The latest readings taken by Curiosity's weather station show that the rover experienced a maximum air temperature of -7°C on Sol 2302 (the equivalent of January 27, 2019 here on Earth), and a maximum ground temperature of 1°C!

That means everywhere inside that blob of blue, white and purple in the above weather map is actually colder than Mars!

WAIT! THAT CAN'T BE RIGHT, RIGHT?

Hold on a second, though. Taking a look at the overnight low temperatures Curiosity measured on that same day, the air temperature got down to -73°C! Even with the wind chill, places in southern Manitoba were "only" at -40 to -50 Wednesday morning!

So, we definitely can't compare low temperatures. Due to its thin atmosphere, Mars just cools off far more quickly than Earth does during the night. 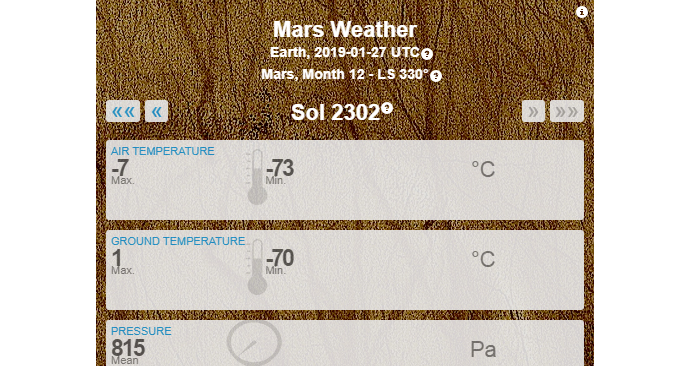 What's still remarkable about this, however, is that we have to go back quite a ways in time - to July 3, 2018 - to get a temperature that's anywhere near comparable to the daytime surface high across central Canada right now! 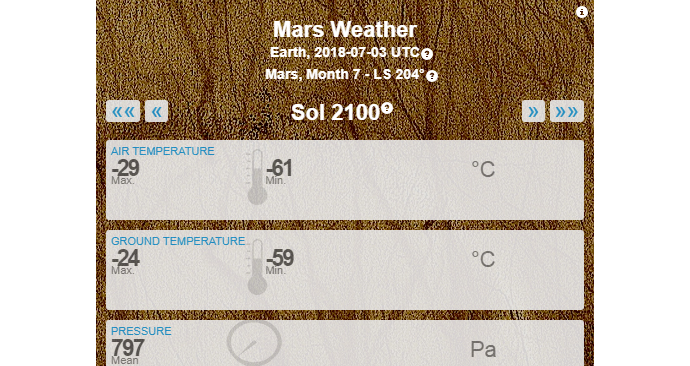 During that period of time, which is a transition season for Mars, Curiosity experienced a deep temperature drop, from 2°C on June 6, down to -29°C on July 3, and then temperatures gradually rose again during the global dust storm that lasted the rest of the season. The rover recorded an even lower temperature, down to -30°C to -31°C in mid-to-late November 2017, right around the southern hemisphere winter solstice.

There's another important factor to consider for these temperatures, which we haven't discussed yet. Location, or more specifically, latitude.

The Curiosity rover just happens to be in Mars' tropics, as Gale Crater is located at 5°S latitude. For comparison, here on Earth, that would be roughly in the middle of the Indonesian rainforest!

A comparison of the Curiosity Rover's position on Mars with where it would be on Earth. Credit: Google/Scott Sutherland

Mars' southern hemisphere is in summer right now, although Curiosity doesn't experience much seasonal variation at its latitude. If we moved the rover up to 50°N latitude on Mars, though, to match the latitude of Winnipeg, the temperatures it just recorded would be much colder, even in the midst of summer!

Viking 2, which NASA landed on Mars in September of 1976, touched down at 47°N latitude, which is a bit closer to the latitude of Regina and Winnipeg here on Earth. At the time of its landing, Mars' northern hemisphere was roughly a third of the way through summer, and the lander read daily temperature variations of between -30°C and -90°C. As the days (or Sols) ticked away, it started to get colder and colder as the autumnal equinox passed for the lander and winter approached. By its 300th day on the red planet, getting close to winter solstice, Viking 2 was recording daily high tempertures of -101°C and daily lows of -111°C! The lowest recorded temperature ever seen on Earth is -89.2°C, at Soviet Vostok Station in Antarctica, on July 21, 1983. There's no way that anywhere in Canada would see such extreme cold!

WATCH BELOW: STUNNING PHOTOS FROM MARS GIVE HINTS AT WEATHER PATTERNS