Expired News - How climate change is fueling California's wildfires - The Weather Network
We use cookies on this site to improve your experience as explained in our Cookie Policy. You can reject cookies by changing your browser settings.   READ MORE I ACCEPT

Monday, November 19, 2018, 4:19 PM - California has been burning more than ever since the turn of the century. Thirteen of the state's twenty hottest fires have occurred since 2000 as increasing temperatures push up the frequency and severity of wildfires.

Below is a clear image of how much wildfires have scorched the Golden State during the 2013-18 period. 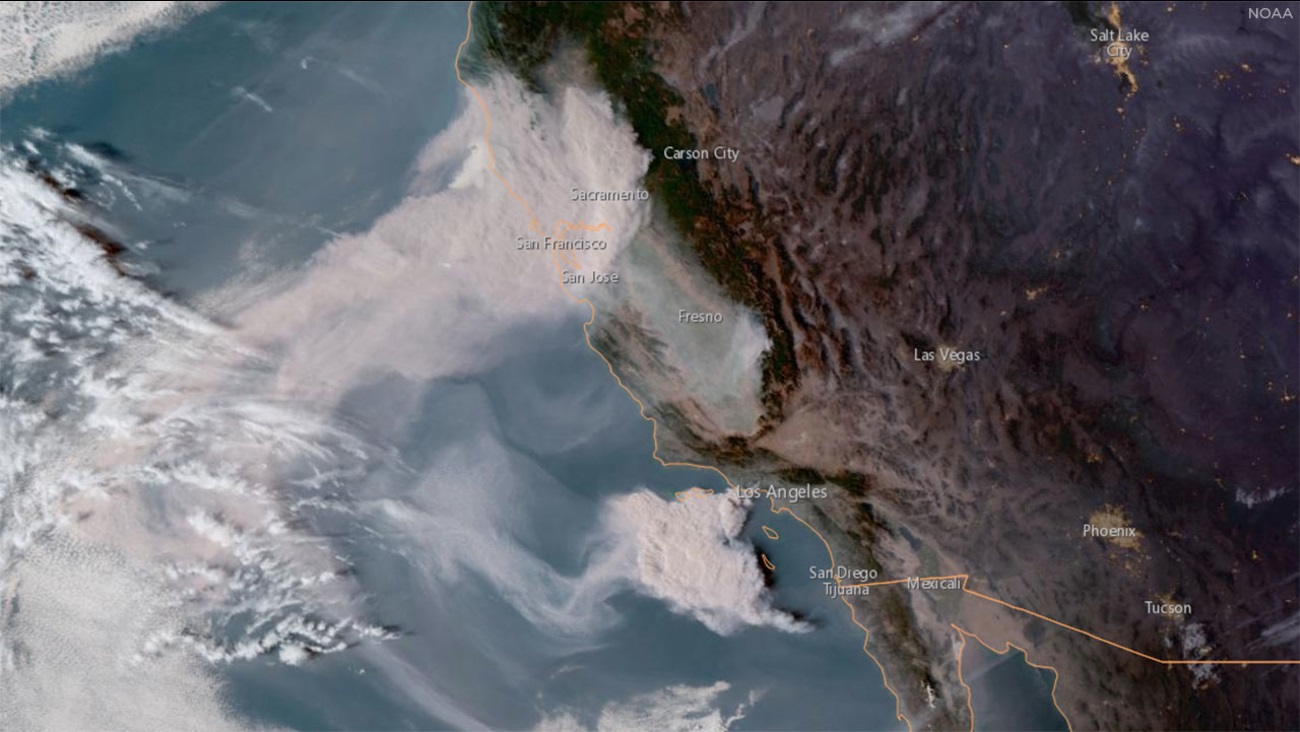 From the ground you get a better sense of how much the surface has burned and the impact it has had on ecosystems and the local population.

Adding up the acreage affected by the flames from 2013 through this time in 2018, we get an overwhelming figure somewhere close to 5.4 million acres. So considering California is roughly 100 million acres in size, that means 5.4 per cent of the state's surface has seen some form of fire over the past 5 years. 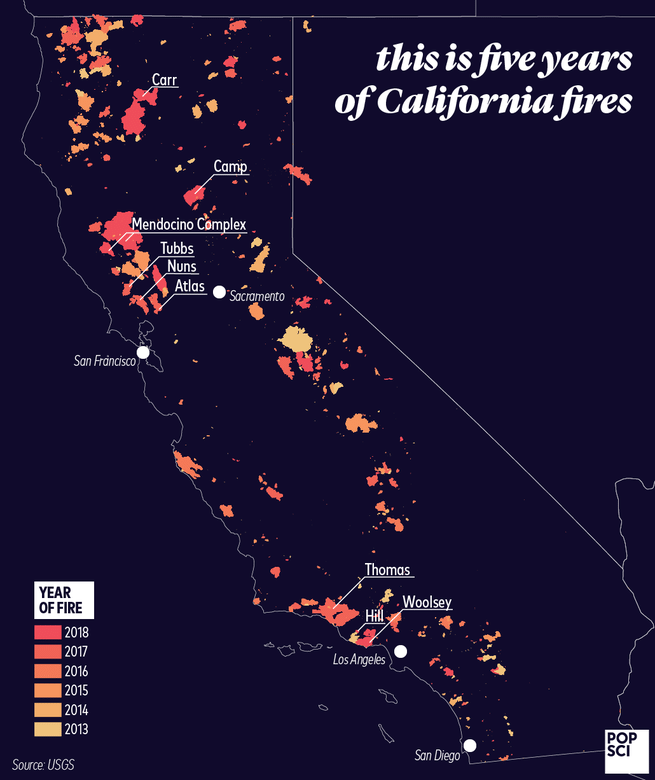 'KEEPS ME AWAKE AT NIGHT'

According to Stephen Pyne, a historian and professor of the School of Life Sciences at Arizona State University, "California is built to burn, and burn explosively." Dry heat, drought, the expanses of land that rely on regular wildfires to regenerate: It's a deadly recipe.

Glen MacDonald, a UCLA distinguished professor of geography and of ecology and evolutionary biology in the UCLA Geography Department points out in one of his current research publications, that the American southwest is experiencing an unprecedented climate state in which the variations in temperature and climate have been magnified.

“We will have a wet year when fine fuels will grow and accumulate, and then we will be hit by very dry conditions, which will dry out soil surfaces and vegetation,” he says, “and the fuel from the wet year is going to cause fires during dry periods. That is the worst of all possible worlds, and that is what keeps me awake at night.” 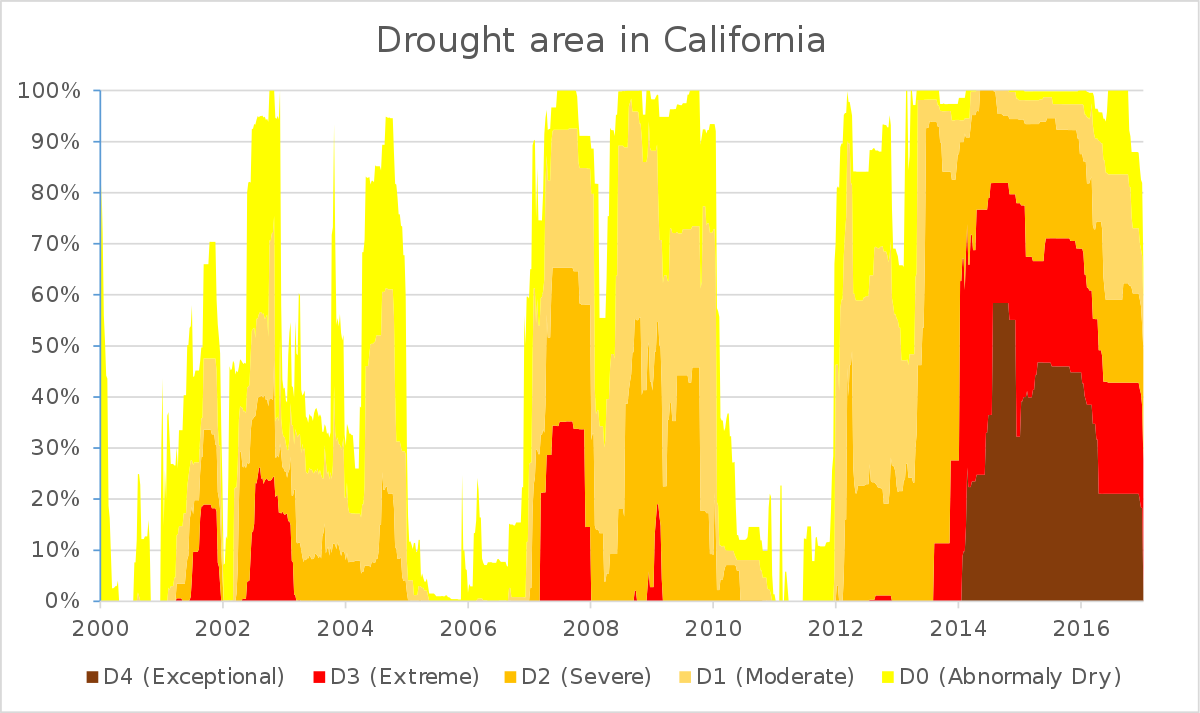 The time scale of events described by MacDonald have occurred in California recently, with a wet 2016-17 winter followed by a very dry and hot summer of 2017, a dry winter of 2017-18 and again dry and hot conditions after during summer and part of the fall in 2018.

On top of this, the multi-year drought California has been experiencing this decade has consistently added dryness to environment aggravating conditions beyond those observed during particular atmospheric events.

Regarding the recent devastation caused by the Camp fire in Butte County, Daniel Swain, a research scientist in the UCLA Institute of the Environment and Sustainability had this to say:

HERE'S HOW CLIMATE CHANGE FITS IN

Over the past 40 years, temperatures in the western U.S. have increased to almost double the global average. The extra heat has had a tremendous impact on forested areas, lengthening the wildfire season several months and drying out large extensions of low lying vegetation and trees and making the environment more fire-prone.

A recent U.S. Government report prepared by leading climate and forest experts explores the interactions between climate change and forests. The main concluding remarks emphasize how climate change is increasing the vulnerability of many U.S. forests through fire, insect infestations, drought and disease outbreaks. Forests are known to play an important role in absorbing and storing carbon dioxide, but the rate of uptake is projected to decline. That in turn will allow more carbon dioxide to accumulate in the atmosphere and oceans, leading to an even warmer climate. 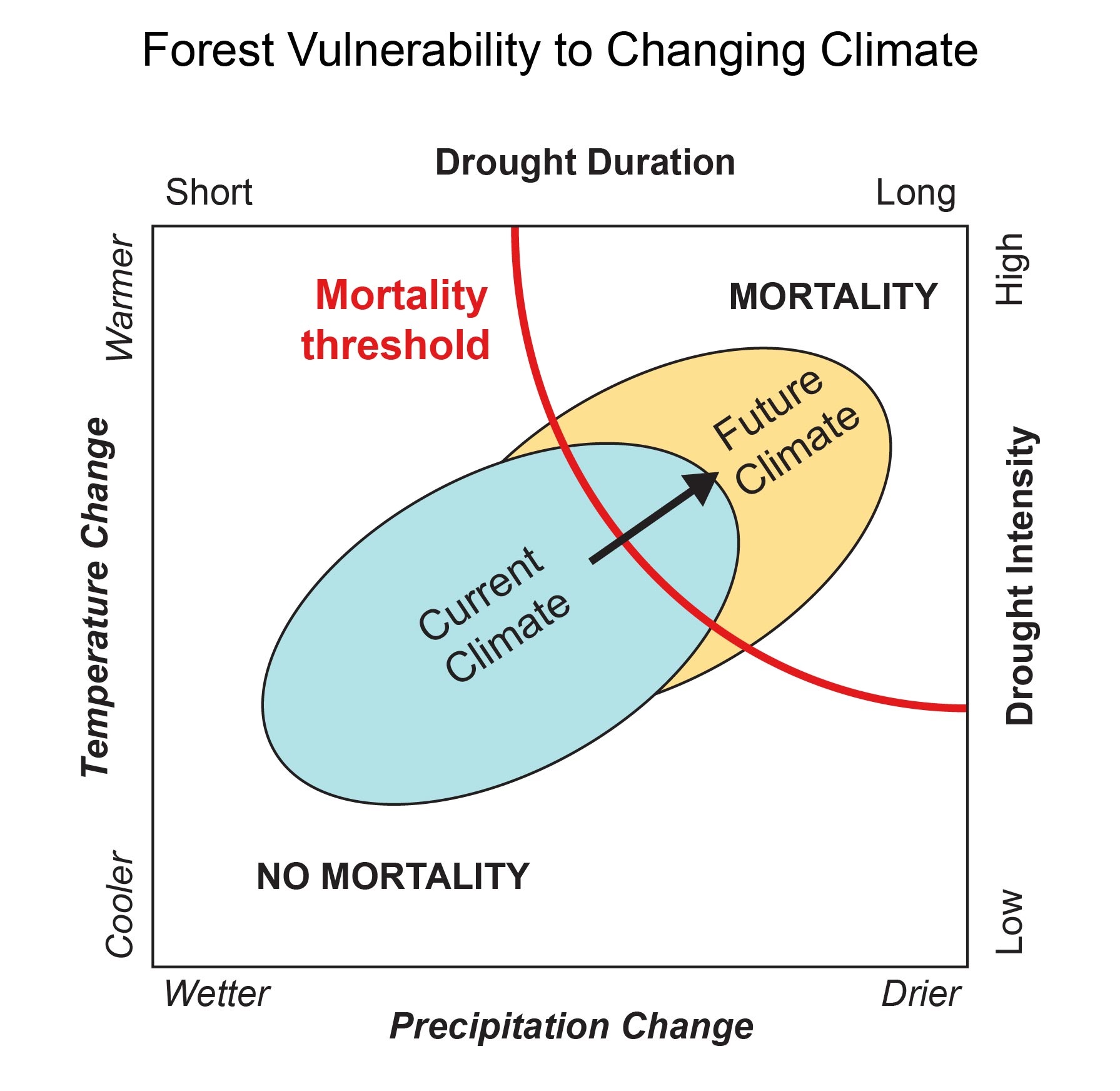 There are a variety of factors that can affect U.S. forests and their management. Insect and pathogen outbreaks, invasive species, and extreme events such as droughts, high winds, ice storms, hurricanes or even landslides produced by heavy rain, have always occurred, but recent climate trends have amplified them.

The rate of tree mortality observed in the western U.S. during the past decade is well correlated with both the increase in average temperatures and associated increases in evaporative water demand. How forests evolve in the future will depend greatly on the frequency of occurrence of extreme events as well as on the underlying changes in the average climate conditions. Although it is complicated to predict trends in future extreme events, there is a high degree of confidence that future droughts will be accompanied by generally warmer conditions. The general rule is that trees and vegetation die faster when a drought period coincides with higher than usual temperatures.

There is a strong relationship between climate and fire, and projected climate scenarios during the 21st century suggest that western U.S. forests will experience large and intense fires more frequently. While the west is at high risk, eastern forests are less likely to see a similar increase of wildfires. On a short term basis, they would be less.