Expired News - Meteorites fall on western Cuba after explosion in the sky - The Weather Network
We use cookies on this site to improve your experience as explained in our Cookie Policy. You can reject cookies by changing your browser settings.   READ MORE I ACCEPT

Meteorites fall on western Cuba after explosion in the sky

Sunday, February 3, 2019, 8:18 AM - A bright flash over Florida, followed by loud explosions ringing out over the western Cuba town of Viñales, were reported on Friday afternoon, during what appears to have been a meteorite impact.

In the early afternoon, on Friday, February 1, reports showed up on the internet of one or more loud bangs going off over the Cuban province of Pinar del Río, which shattered windows and were accompanied by a trail of smoke in the sky.

Shortly thereafter, residents of the town of Viñales, in the north-central part of the province began showing off the "black rocks" that rained down from the sky in the aftermath.

Even with the loud sonic boom, shattered glass and falling rocks, no injuries have been reported from this event.

While it will take time to confirm that this is truly a meteorite impact, since we don't want to jump to conclusions, but the evidence is all there.

Several of these rocks exhibit the characteristic black 'fusion crust' that is present on all meteorites.

Some of the samples are very bright white and grey, which initially cast doubt upon their potential to be space rocks. A closer look, however, revealed signs of a fusion crust on the other side (if only they would flip them over so we could see!!).

This, along with the video that some shot of the event, embedded in the following tweet from Prof. Abel Méndez, a planetary astrobiologist at the University of Puerto Rico, are very compelling evidence that this was, indeed, a meteorite impact.


Here you can hear the meteor blast. Witness was recording and narrating what just happened, a blinding light, then much later the blast. Meteorito en Viñales (Pinar del Río) 1.02.2019 https://t.co/dE8zaIdJqT via @YouTube

Based on the timing of the loud sonic boom heard in the video (at around 46 seconds in), Méndez estimates that the meteoroid exploded at least 15 kilometres above the ground.

Meanwhile, reports began trickling in from observers in southern Florida and the Florida Keys, of a bright fireball meteor flashing across the sky. 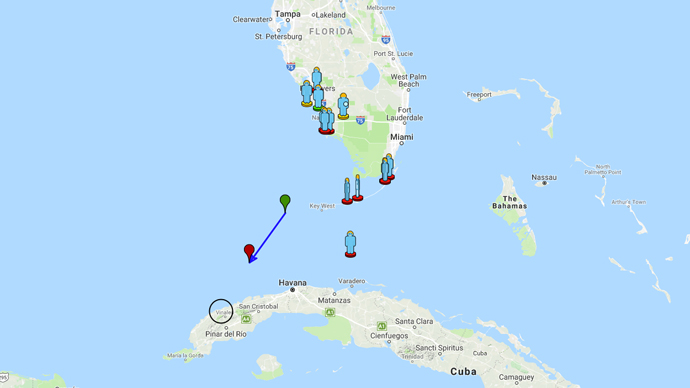 Event 513-2019 on the American Meteor Society Fireball Reports page shows that the initial fireball and bolide was spotted by a handful of people in southern Florida. Credit: AMS/Scott Sutherland

The blue arrow on the above map indicates the American Meteor Society plot of this fireball's trajectory. The added black circle indicates where the meteorite fragments fell.

With satellites watching Earth's surface at every moment of every day, there's always a chance that it can detect an event like this, and it just so happens that NOAA's GOES-16 weather satellite was able to capture it.

This animation from GOES-16 weather data shows first the "Split Window Difference" and then the "Sulfur Dioxide" views from the satellite, both of which show the pulse of the meteoroid explosion, as well as the remnant smoke drifting away from it. Each frame represents a jump forward by 5 minutes. Hat-tip to Twitter user @brendonme for finding this and sharing a similar animation on social media. Image credit: RAMMB/CIRA animation by Scott Sutherland

According to this data, the explosion took place at 18:17 UTC or 1:17 p.m. Eastern Standard Time.

This explosion was caused by the immense forces exerted on the meteoroid, as it plows through the atmosphere, and different pressures on different parts of the rock, as well as internal forces as it begins to crack, cause it to fracture and blast apart. The explosion of the rock is what caused the sonic boom heard well after the flash of light.

Some replies to the initial reports on Twitter remarked about the lack of an impact crater, however, as one of the tweet above shows, these rocks were not travelling fast enough to produce a prominent crater.

When a meteoroid hits the top of the atmosphere, it will definitely be travelling fast - at least 40,000 km/h - but its passage through the atmosphere slows it down very quickly. After the initial flash of light caused by this meteoroid, its speed would have been reduced so much that, after travelling for just a bit farther through the sky along its initial trajectory, it would have dropped out of the sky at roughly the same speed as it would have if you simply dropped a rock from a plane flying at that same altitude. As such, the rock will only hit the ground at terminal velocity, which is only between 150-300 kilometres per hour (typically).

While that would most certainly hurt if it were to hit someone, that speed is not enough to cause a crater.

It would take a much larger object, travelling even faster, and likely hitting the atmosphere at a much steeper angle, to make it all the way to Earth's surface and still have enough speed and energy to produce a visible crater.

There was certainly the potential for injury during this event, given the shattered glass and falling rocks, but it appears as thought everyone in the area was lucky enough to escape unharmed.

Tonnes of rock and dust from space falls to Earth every day. Much of it is tiny grains of dust and ice, while once in awhile we see larger bits, like this one. These events are random, however, and - unlike what we see in science fiction - they are not any indication that something larger is coming our way.

One reality that this does highlight, however, is that there are plenty of objects floating around out in space that we do not know about. NASA's NEOWISE mission, as well as several sky surveys from telescopes on the ground, monitor space on a regular basis, looking for rogue chunks of the early solar system that may pose a problem for us.

Fortunately, all of the larger, more potentially troublesome objects that have been found pose no threat to us for the next 100 years, at least. There are, very likely, many smaller objects that can pose a danger on a smaller scale, though, which we need new initiatives and technology to find, before they light up our skies.