Expired News - Eight volcanic eruptions that scarred human history - The Weather Network
We use cookies on this site to improve your experience as explained in our Cookie Policy. You can reject cookies by changing your browser settings.   READ MORE I ACCEPT

Sunday, December 23, 2018, 1:56 PM - An eruption from Anak Krakatau is the suspected cause of the tsunami that has devastated parts of Indonesia, adding another chapter to the already-impressive history of the infamous volcano.

Volcanoes are arguably rivaled only by earthquakes as the most powerful and destructive of all the forces of nature.

An eruption can alter our planet's climate, end a civilization, wreak untold destruction, claim numerous lives and leave a deep mark on our collective cultural memory.

We've put together a list of volcanoes that, for one reason or another and in no particular order, made history.

In terms of human cost, Mount St. Helens’ spectacular eruption did not result in a very high death toll, but on a continent not at all accustomed to major explosions like this, it left a mark in the public mind.

Earthquakes in the days leading up to the eruption eventually caused part of the volcano’s north face to collapse in a massive landslide. Pent-up gasses were suddenly released through the side of the volcano, blasting the landscape.

Almost 400 square kilometres of forest was decimated by the blast, aside from the damage caused by the avalanche and mudslides. Ash fell on 11 states.

Fifty-seven people lost their lives, including the volcanologist who was monitoring the mountain in the days before.

The death toll could have been higher, however, and there are a few incredible survival survival stories:

Canada’s volcanic entry into this list doesn’t rank high in terms of death toll, at an estimated 2,000, but it is still one of our country’s deadliest natural disasters, rivalled only by the Newfoundland Hurricane of 1775, which killed twice as many people.

When the Tseax Cone burst to life, lava flowed into the valley below, damming the Tseax River and forming modern-day Lava Lake, and redirecting the nearby Nass River.

We know a bit about the disaster thanks to accounts by British Columbia’s Nisga’a People, who worked the catastrophe into their lore, casting the eruption as the result of young people mistreating the life-giving  salmon.

Today the site is within the boundaries of Nisga’a Memorial Lava Bed Park.

RELATED: What's going on beneath Yellowstone? The truth, here

For such a small nation, the volcanoes of Iceland can reach far beyond the island’s shores to effect countries around the world.

The eruption of Mt. Laki reportedly lasted eight months. The direct effects killed more than 9,000 people, and decimated the island’s agriculture, causing even more death and disruption. A full quarter of the population is believed to have died as a result.

Beyond the island, the sheer amount of ash launched into the air affected the weather around the world. Thick smog was reported in the United States, crops failed in Europe and Egypt (made worse by a hot summer) and some researchers suggest it may even have affected the Asian monsoons.

Even today, Iceland’s volcanoes can seriously affect the country’s distant neighbours, like the 2011 eruption of nearby Grímsvötn, which forced hundreds of European flight cancellations:

Mt. Pelee’s eruption at the dawn of the 20th century was the doom of the town of St. Pierre on the French Caribbean island of Martinique.

It hurled a huge cloud of hot gas and incandescent rock particles into the town – but despite the death toll of almost 30,000 people, the catastrophe is perhaps best known for the incredible stories of some of the survivors.

One, a prisoner serving time for assault, was in solitary confinement deep below the town jail, enabling him to escape the worst effects of the blazing cloud. He was rescued four days later and pardoned.

Another, a carpenter who lived at the edge of the area affected by the cloud, was burned, but managed to survive.

The most remarkable story, though, was that of a young girl, who escaped by scrambling into her brother’s boat. Though she was burned and her boat was charred, she was picked up, unconscious, by a French cruiser, two miles out to sea.

Vesuvius seen from Portici by Joseph Wright of Derby/Wikimedia Commons.

Everybody knows this one.

We know a lot about Mt. Vesuvius because one of the best-known historians of ancient times, Pliny the Younger, happened to be nearby when the mountain blew its top. His uncle, also called Pliny, was in command of a nearby Roman fleet and assisted in evacuating some of the survivors.

Around 16,000 people are estimated to have died, and the towns of Herculaneum and Pompeii were destroyed.

The volcano would trouble residents of the region on and off up to the present day, with one eruption being filmed in 1944:


It’s still very much at risk of eruption, which is a problem, because millions of people in and around the major Italian city of Naples live near the volcano. Authorities keep a watchful eye for signs of future eruptions, with plans to evacuate hundreds of thousands of people, just in case.

Many visitors to modern Greece are likely to make their way to the island of Santorini, famous for its shining white houses and signature blue roofs.

If you made your way down there about 3,500 hundred years ago, when the island was known as Thera, you’d have been greeted by a devastating cataclysm.

The eruption and subsequent tsunamis are theorized to be one of the causes of the end of the Minoan culture, a pre-Greek civilization based on nearby Crete. This was a big deal: They created some of the first known forms of writing, some of which was so sophisticated, we still haven’t deciphered it.

A bit more tenuously, ash and dust in the atmosphere mentioned in some contemporary Chinese sources may even have originated from the Santorini eruption.

Not the deadliest eruption to strike the sprawling Indonesian archipelago, but probably the most famous. When this volcano finally blew at the end of August 1883, the blast was one of the loudest sounds ever heard by mankind – audible more than 3,000 km away in Australia and the Mauritian Archipelago in the Indian Ocean.

The force of the blast sparked tsunamis and sent chunks of rock and pumice weighing hundreds of tonnes into the air. The ash cloud towered 32 km into the air, and people around the world reported striking sunsets for months after the event, due to all the material spewed into the atmosphere.

The estimated death toll is believed to have been more than 35,000 people, a catastrophe for local residents – so you can imagine people were a little nervous when, in 1928, a new volcanic cone started rising from the sea in the midst of the devastated island.

Called Anak Krakatau, or Krakatoa’s Child, It’s still quite active. So far, it’s built itself up to about 300 metres above sea level since it first emerged:


Talk about the butterfly effect. When this volcano in Indonesia blew its top almost two centuries ago, it ejected so much ash and other materials into the atmosphere, it created a short-lived global cooling event – driving global temperatures down by as much as three degrees.

That doesn’t sound like a lot. But even that small tweak to our planet’s climate was enough to mess with the growing season as far away as Europe and North America. Extremely rare summer snows and frost severely damaged or stunting the crops in 1816, driving up prices and causing localized famine.

That’s on top of the immediate effects of living next to a volcano when it explodes. Ten thousand people were killed in Indonesia either in the initial blast, or by the tsunamis that followed. Another 80,000 are believed to have died as a result of starvation in the region.

The blast ranks as a seven on the eight-point Volcanic Explosivity Index, a once-in-a-thousand years event.

You can hike the volcano these days, like this Australian crew did:


They would have had a harder time of it the day before the explosion. The pretty-looking volcano itself is 2,800 metres tall -- believed to be almost 1,500 m shorter than it was at the time of the eruption. 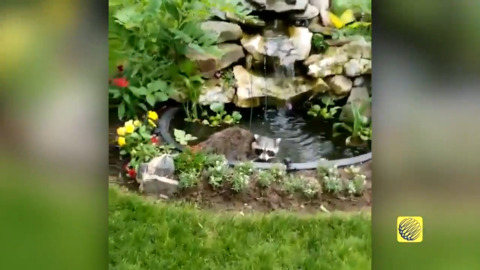