Expired News - Black widow spiders continue to creep northward - The Weather Network
We use cookies on this site to improve your experience as explained in our Cookie Policy. You can reject cookies by changing your browser settings.   READ MORE I ACCEPT

Venomous black widow spiders are being spotted farther north than they've ever been found before, scientists have found with the help of photos snapped by the public.

"They're occupying new habitats that we didn't previously think they could," said Yifu Wang, lead author of a new Canadian study tracking the shifting range of the northern black widow, most likely due to climate change.

As they start pushing into new areas, this kind of information will help both the public and local health authorities be better prepared, reported Wang and colleagues from McGill University and the Montreal Insectarium.

The study, published Wednesday in the journal PLOS ONE, found that pictures of spiders taken by ordinary people, or "citizen scientists," using their smartphones were crucial for tracking the small, hard-to-find creatures. 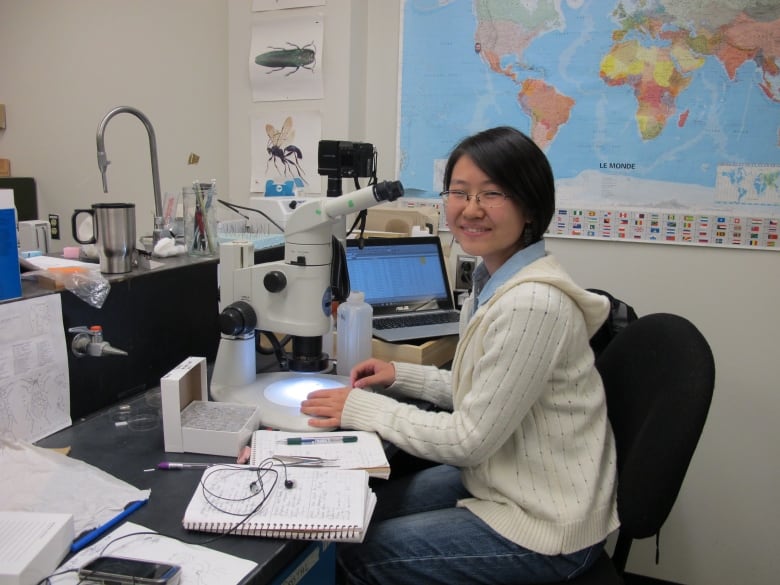 Yifu Wang is the lead author of the new study, which she worked on while she was an undergraduate student at McGill University. She is now working on her PhD at the University of Cambridge. (Yifu Wang)

The northern black widow is a black spider with red markings and sometimes white slashes on its back, and two red triangles on its belly that form the separated top and bottom halves of an hourglass. (In the southern black widow, the hourglass is connected.) It's not picky about its habitat and can be found among humans in places like backyards, pine plantations and under fence posts.

Black widow spiders rarely bite humans, and their bites aren't usually life-threatening for adults but can cause severe pain and lead to painful muscle contractions, according to the Nature Conservancy of Canada.

Still, it's good for local health practitioners to know how to treat them in areas where the spider occurs. But figuring out where that might be is not easy, said Wang.

It's "a really small species, so they are very hard to find," said Wang.

That's part of the reason why until now scientists had only a fuzzy idea of the black widow's range, based mainly on counts of sightings in certain states or counties. There were so few records between 1960 and 1990 that it wasn't possible to map the spider's distribution reliably.

Wang and her colleagues thought they could get a clearer picture by combining scientists' observations with photos submitted by members of the public to websites and apps dedicated to sharing observations of the natural world.

Given the spiders' distinctive markings, sightings accompanied by photographs were expected to be "quite reliable," Wang said.

Wang, then an undergraduate student at McGill, collected data from Bugguide, iNaturalist and other citizen science apps, along with online records of specimens collected by biologists and stored at museums around North America.

She also visited the Canadian National Collection of Insects, Arachnids and Nematodes managed by Agriculture and Agri-Food Canada in Ottawa to record the specimens stored there in little vials of alcohol. 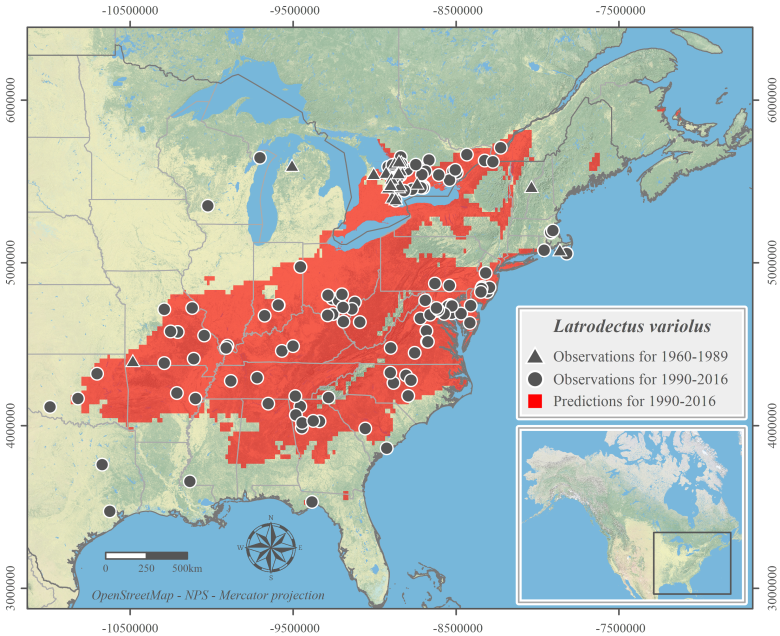 A map shows confirmed northern black widow sightings from 1960 to 1989 and from 1990 to 2016, along with the predicted range in the more recent period, based on those sightings. (McGill University/PLOS ONE)

HOW THE PUBLIC HELPED

Because of the sparse pre-1990 data, the researchers can't say with statistical certainty that the spider's range was shifting northward because of climate change.

But they did find that:

Further analysis suggested that the range likely extends a further 50 kilometres north, making sightings possible in places like northeast Montreal, where they haven't yet been spotted.

Therefore, the researchers wrote, climate change "could be a strong contributor to the increase in occurrences of northern black widow beyond their historical northern limit."

Wang said the citizen science data helped a lot, representing more than 50 per cent of records of the northern black widow.

The study also tracked the black purse-web spider, which is not venomous, and found it is moving out of Arkansas, Missouri and Tennessee (the southwest corner of its range) and expanding into Canada. The most important factor determining its range is the average temperature during the coldest three months of the year.

The researchers have now set up a special citizen science project on iNaturalist to track these two species in the future.

Together, those details will make your observation valuable to scientists.