Expired News - BBQ brush injuries spike in Canada, experts call for ban - The Weather Network
We use cookies on this site to improve your experience as explained in our Cookie Policy. You can reject cookies by changing your browser settings.   READ MORE I ACCEPT

Tuesday, October 17, 2017, 1:41 PM - A recent risk-assessment report has found that the number of wire-bristle barbecue brush incidents has spiked in Canada, which has experts urging Health Canada to ban sales of the grill cleaning tools.

The report completed in August was provided to CBC. It shows the number of incidents related to grill cleaning brushes has jumped to 40, with over 20 documented in July 2017. The incident reports go as far back as 2004.

"They could be moving a little quicker," Dr. Leigh Bishop of Guelph General Hospital told the news agency. "I'm not sure if they're taking it as serious as they could be. What will it take -- a death? Maybe then they'll move a little faster."

Health Canada's webpage for food safety and barbecuing tips warns the metal bristles on a brush can become loose over time and can stick to the grill during cleaning.

"The bristles can stick to food and could be accidentally swallowed, possibly causing serious throat or digestive injuries," the website reads.

According to Dr. Bishop, while the number of cases has spiked, many go unreported. The surgeon told CBC between 2010 and 2016, there were five cases he treated and did not report.


"Both patients and physicians need to do more reporting to Health Canada on this," he told the news agency. "And if that were the case, the numbers would probably go up."

Patients suffered injury in 28 of the 40 cases, according to the risk report. Wire bristles were found 16 times in the mouth, 15 in the throat, one in the esophagus and another in the intestine.

The majority of cases (34) involved an adult as the person injured. Meanwhile, the remaining six cases involved children.

Healthcare providers say it's a good idea to inspect your grill carefully after cleaning, or better yet, avoid using a wire bristle brush altogether.

By leaving the barbecue on for a few minutes with the lid closed, you can loosen up any debris stuck to the grill, making for an easier cleaning experience.

Here at The Weather Network, we found that using half an onion can be just as effective (see the video below).

Clean your BBQ with an onion and some VIM 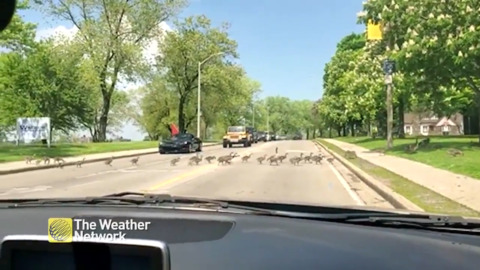