Expired News - Ban on captive animals could speed up extinction, here's why - The Weather Network
We use cookies on this site to improve your experience as explained in our Cookie Policy. You can reject cookies by changing your browser settings.   READ MORE I ACCEPT

Ban on captive animals could speed up extinction, here's why

Friday, March 30, 2018, 12:23 PM - The recent death of the last male Northern white rhinoceros — and the imminent extinction of the vaquita porpoise — is a stark reminder we are not going to win every battle to save endangered species in the wild. We can rescue some from total extinction — and have already — but only with the help of zoos and aquariums.

Wildlife populations are increasingly under stress from human activities and their impact on the environment. Population growth, habitat destruction and wildlife poaching — whether for sustenance or profit — are among the largest threats contributing to their extinction.

Rhino horn, for example, fetches upwards of US$60,000 per kilogram in countries where it is prized as a cure and status symbol. But this is bogus. Rhino horn is made of keratin, like our fingernails, and cannot cure disease.

We need a planet-wide shift in thinking about how we value the wildlife resources within the limited intact ecosystems that remain. But many species can’t wait that long.

If we accept that we will lose some battles to save species in the wild, how do we make sure we don’t lose the war on extinction in the long term?

One option is to establish populations in zoos and aquariums. When carefully managed, these populations serve as safety nets against species extinction. They buy us time until we sort out the human side of the extinction equation. 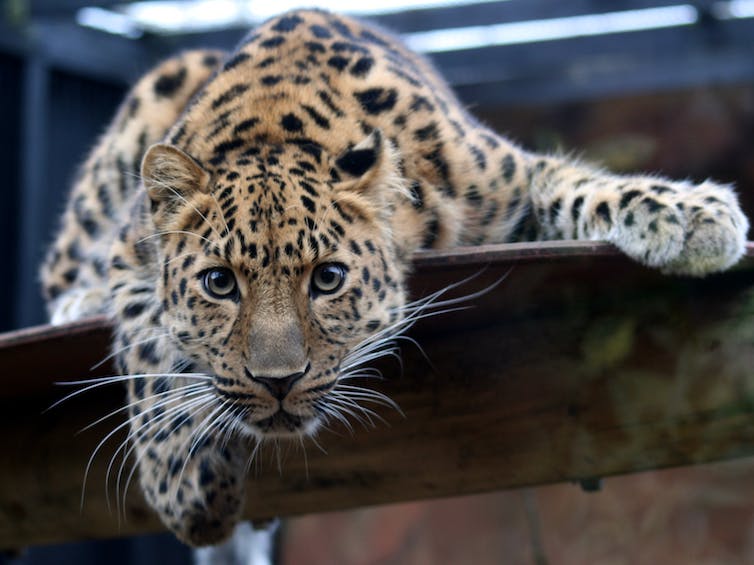 Amur leopards are critically endangered, with only 80 estimated left in the wild. (Wikimedia), CC BY-SA

Captive populations have restocked wild populations and saved many species from extinction. The Puerto Rican toad, California condor, Scimitar-horned oryx, Amur leopard and the black-footed ferret wouldn’t exist if it weren’t for their captive-bred ancestors. In Canada, captive breeding helped save the Vancouver Island marmot.

Wildlife biologists like myself continue to work with species declared extinct in the wild — the Kihansi spray toad, Panamanian golden frog, Micronesian kingfisher and Hawaiian crow. But we will have to wait until the threats, such as habitat loss and invasive species, that led to their extinction in the wild are neutralized before they can be reintroduced.

Setting the stage for romance

Establishing a captive breeding population is not as simple as putting males and females together and letting nature take its course.

It takes time to work out a species’ space, nutrition and social needs. But wait too long to establish captive populations and it can be too late to save the species.

Read more: How to save zoos? Focus on education, conservation

Such is the case with the Northern white rhinoceros. Researchers at the San Diego Zoo have been working for decades to figure out how behaviour and diet alter the breeding success of their captive population of white rhinos.

The reality is, with only two aged female Northern white rhinos remaining, there is not enough genetic diversity on Earth to recover this subspecies.

There’s some hope that assisted-reproduction techniques like in vitro fertilization might work, but these are not yet reliable conservation tools. 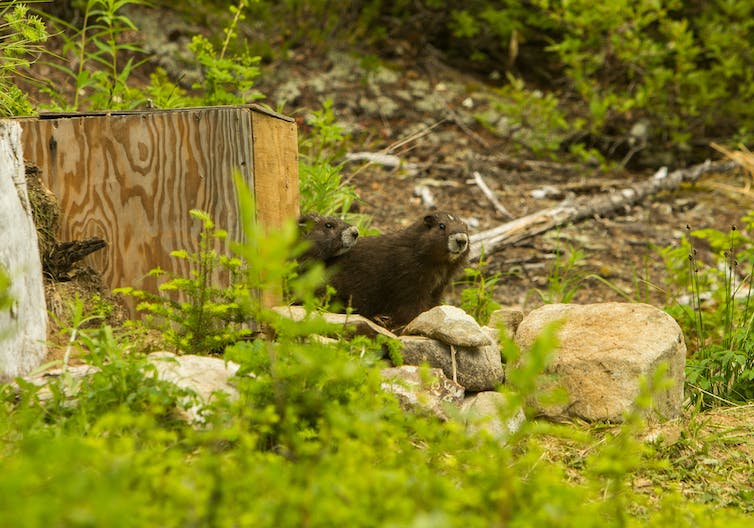 Even with the Vancouver Island marmot, one of Canada’s most endangered species, we started the captive breeding and reintroduction program with fewer than 50 animals — not much of a base in terms of genetic diversity.

It took years before the first marmots were born in captivity at the Toronto Zoo. Even now, after more than two decades, only 55 per cent of our pairs breed every year. We pair the animals based on their genetics to minimize inbreeding, but that doesn’t mean they’ll be attracted to each other. We’re still trying to figure out how to make them “fall in love.”

But we have returned more than 500 animals to the rocky slopes of Vancouver Island. They have bred successfully, but we remain concerned that the species’ lack of genetic diversity may impair their ability to adapt to climate change. For example, warming temperatures may expose them to new diseases or parasites.

In general, a reduction in genetic diversity means there are fewer options for a species to evolve adaptations to changing environments.

Too little, too late

Sometimes, despite our best efforts, we fail. The vaquita, a small porpoise in the Gulf of California, has been driven to the edge of extinction by gillnet fishing.

By 2013, there were fewer than 60 animals left in the wild. But no captive population was established, possibly partly due to the anti-aquarium sentiment generated by the film Blackfish and animal rights organizations that made that option unpalatable.

In a last-ditch effort to save the species, VaquitaCPR attempted to capture a few of the remaining animals to establish a captive breeding population. The plan was abandoned when one of the two caught animals died.

As of March, fewer than 12 vaquita remain in the wild. There is no captive population and little hope of preventing their extinction.

This may be the fate of other cetacea if Bill S-203, which seeks to amend Canada’s Criminal Code to end the captivity of whales and dolphins, is passed. The text currently under consideration would prevent anyone from taking a whale, dolphin or porpoise into captivity, and ban the import (or export) of cetacean sperm, tissue culture or embryos.

A similar fate will befall the Val-d’Or caribou, a small population of 18 individuals of the threatened Boreal (Woodland) caribou species in Quebec, too isolated to recover on its own.

An accredited zoo had offered to take in the herd as their genetics may be important for eventual species recovery. But public outcry against “captivity” prevailed. The Quebec government, unwilling to pay the $76 million needed to protect their habitat, will leave them to die off.

The public’s outdated perceptions of accredited zoos and aquariums hampers our best efforts to save the planet’s endangered species.

How hot is too hot?

In addition to acting as hedges against extinction, captive populations are also critical for research on endangered species that can’t be done on free-ranging animals. For example, biologists have developed non-invasive methods to monitor hormone levels by measuring metabolites found in urine and feces. 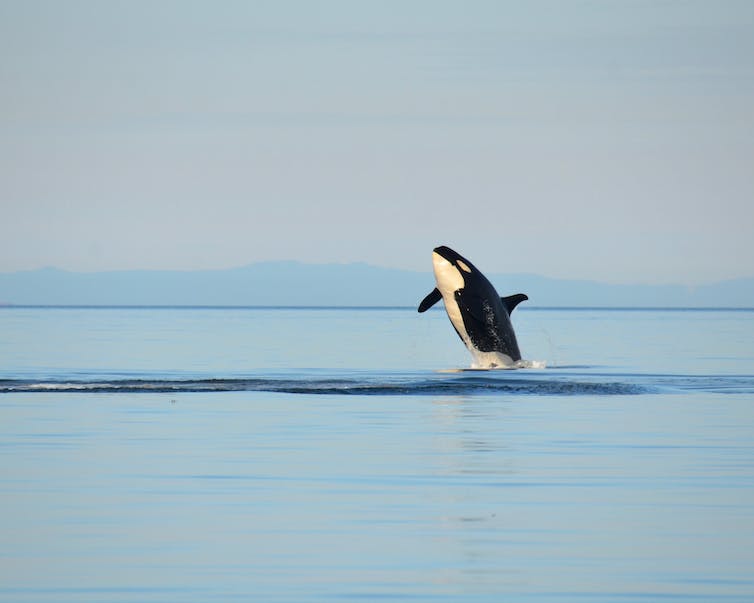 J19 Shachi, a member of J-Pod of the endangered community of killer whales knows as the Southern Residents, breaches in the Strait of Juan de Fuca between Washington and British Columbia, Canada. (Shutterstock)

My colleagues in the U.S. developed these techniques in captive marine mammals and have used them to determine that the endangered orcas of the Salish Sea, an area of coastal waterways in southern British Columbia and northern Washington state, are losing pregnancies due to malnutrition. Recovery of the chinook salmon stock is critical to this orca population’s revival.

We only have this information because we had captive marine mammals to study so we could develop these non-invasive hormone techniques.

In my own research, I rely on captive populations of polar bears to understand how hot is too hot for these animals. In addition to optimizing zoo housing for the species, we want to predict the effect of a warming Arctic on polar bears’ ability to adapt to terrestrial hunting in the absence of sea ice.

It doesn’t look good. Polar bears quickly heat up when active in warm temperatures. Zoo polar bears jump in the pool to cool off, but wild bears may not have that option in the middle of a land-based hunt. If we don’t immediately maximize our efforts to reduce climate change this species is going to be in big trouble.

With spring now in full swing, I’m shifting my research focus back to the Vancouver Island marmots. They have a short four-week breeding season, so I have a small window to figure out how I can help them fall in love and have more pups.

WATCH BELOW: Elephant caught smoking on camera in India, scientists are baffled