Expired News - Eyes to the sky: Auroras in Canada this weekend - The Weather Network
We use cookies on this site to improve your experience as explained in our Cookie Policy. You can reject cookies by changing your browser settings.   READ MORE I ACCEPT

News
Editor's Choice
Canada's 2020 Fall Forecast & Winter Preview
OUT OF THIS WORLD | Earth, Space and Everything In-Between - a daily journey through weather, space and science with meteorologist/science writer Scott Sutherland

Eyes to the sky: Auroras in Canada this weekend

Thursday, March 15, 2018, 10:22 AM - There is no massive solar storm headed for Earth, despite some recent reports to the contrary, but aurora chasers are still expecting a good show this weekend, due to the effects of an immense coronal hole, and a strange phenomenon known as 'equinox cracks'.

If you have reasonably clear skies on the nights of Saturday, March 17 and Sunday, March 18, and some free time in your schedule for a little road trip, it's looking to be a great time to get out to see the Aurora Borealis, aka The Northern Lights.

NOAA's Space Weather Prediction Center is currently forecasting a G1 geomagnetic storm for the nights of March 14 and March 15, due to the effects of the solar wind - the constant stream of charged particles that flows outward from the Sun. 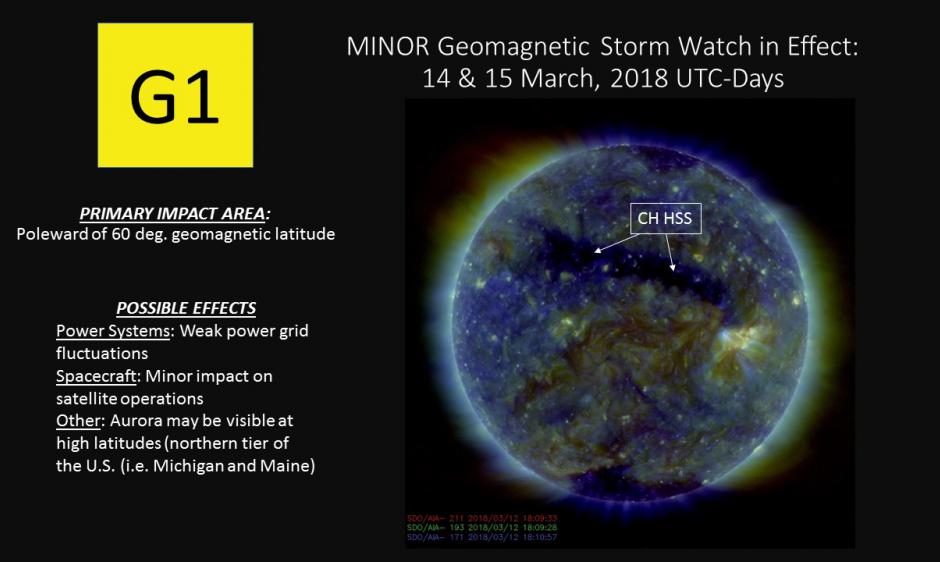 What that means is that they are expecting a minor disturbance to Earth's geomagnetic field, as a slightly faster part of the solar wind stream sweeps past Earth over the next two days. There could be some minor impacts to satellite communications, power grid controllers could see some weak fluctuations, and we may see some auroras across Canada as a result.

Coming up on the weekend, however, Earth will encounter what's known as a Coronal Hole High Speed Stream (CH HSS), and the Co-rotating Interaction Region (CIR) that precedes it, both of which may cause even bigger auroral displays.

A plot of the solar wind for March 18, 2018, and how it interacts with Earth (green dot), as well as NASA's STEREO-A (blue dot) and STEREO-B (red dot) satellites. Credit: NOAA SWPC

As the solar wind spirals away from the Sun, the leading edge of the faster-moving stream (the oranges and reds, above) 'piles up' on the trailing edge of the slower part of the wind (the greens and blues), and this results in a dense ribbon of solar particles between the two regions. This ribbon, known as the co-rotating interaction region, or CIR, has strong magnetic fields embedded in it, and when those magnetic fields interact with Earth's geomagnetic field, it can produce a shock that can ramp up geomagnetic activity.

Once the CIR has passed, Earth is plunged directly into the fast flow of the solar wind, where the high energy particles in that flow get caught up in Earth's magnetic field, to stream down into the upper atmosphere, where they produce auroras.

These faster regions of the flow, known as coronal hole high speed streams, abbreviated as CH HSS, are caused by openings in the solar corona - the atmosphere of the Sun. The corona is normally kept very close to the Sun's surface by a tangle of intense magnetic fields that protrude from the surface, but on occasion, an opening can develop in these magnetic fields, which allows solar particles to stream away at high speed. These openings are, appropriately, named coronal holes.

Watch below as NASA tracks the coronal hole - the dark band visible in the Sun's northern hemisphere - from March 11-13:


All of this happens on a fairly regular basis, as the solar wind pinwheels around the Sun, and Earth interacts with slower, denser parts of the solar wind, followed by sparser, faster regions of the flow. The intensity of the stream is usually dependent on the size of the coronal hole, and the more intense the stream, the more intense the resulting effects here on Earth - usually.

Adding to the potential for auroras, now, is the fact that we are close to the March equinox, which is typically a time associated with more intense geomagnetic activity.

Regardless of what the Sun is doing - whether it is near its maximum activity or minimum, or whether there are solar flares and coronal mass ejections or not - there appears to be a semi-annual pattern in geomagnetic activity around the Earth. The peaks of this pattern happen around the equinoxes.

According to Dr Tony Phillips, of SpaceWeather.com,

This is called the the "Russell-McPherron effect," named after the researchers who first explained it. The cracks are opened by the solar wind itself. South-pointing magnetic fields inside the solar wind oppose Earth’s north-pointing magnetic field. The two, N vs. S, partially cancel one another, weakening our planet’s magnetic defenses. This cancellation can happen at any time of year, but it happens with greatest effect around the equinoxes. Indeed, a 75-year study shows that March is the most geomagnetically active month of the year, followed closely by September-October–a direct result of “equinox cracks.”

So, while there's no guarantee that one of these 'equinox cracks' will be present this weekend, Phillips says that we've already seen the affects of one, during the March 9 geomagnetic storm, which caused an intense burst of auroras.

The images in the tweet above were taken by Teresa and Darlene Tanner, two aurora chasers who described it as "the most aurora we have seen yet this year in Central Alberta."

If you happened to be reading certain media outlets over the past couple of days, you may have seen claims that two massive solar flares had blasted out from the Sun on March 6 and 7. In addition, the claims held that the first of them was an X-class flare, which was the strongest so far this year, and that the resulting solar storm could cause power blackouts, satellite disruptions and stunning auroras when it reached Earth.

The problem with these claims is that they're wrong.

"This story is not plausible in any way, shape or form," Bob Rutledge, the head of NOAA's Space Weather Prediction Center, told Newsweek. "Things are all quiet for space weather, and the sun is essentially spotless."

When Mashable's Miriam Kramer contacted Rutledge, he responded by saying "This is just garbage, quite frankly."

If the claim of "massive solar storms" in March seems vaguely familiar, it certainly isn't from 2018.

It could be from back in 2012, perhaps, when there were X-class flares that happened on March 6-7. The coronal mass ejection (an immense cloud of charged solar particles that is launched out into space during some solar flares) that occurred along with those flares did impact Earth and did cause auroras, but any other impacts were minor, at worst. It may also have been a memory from 2015, when we saw the spectacular "St Patrick's Day Geomagnetic Storm" that was caused by similar circumstances to what happened in early March 2012.

As it stands now, NOAA's SWPC is predicting the arrival of the coronal hole high speed stream, and the co-rotating interaction region (CIR) that precedes it, sometime on the weekend. It's the transition through the CIR and the entry into the high speed stream, that is expected to cause the disturbance to Earth's magnetic field, which will then touch off the aurora display. Coinciding with a New Moon on the 17th, this should provide excellent viewing conditions for anyone who wants to see what kind of display the auroras put on for us.

Check your weather forecast, to ensure that you'll have reasonably clear skies. Be sure to get out from under any light pollution in your area, as any competing light sources in the sky will make it more difficult to see the auroras. Depending on where you are, that may simply involve a short drive outside the city, or in the case of the Windsor to Quebec City corridor, a more lengthy journey north to escape the abundant, overlapping light pollution domes from closely-spaced urban centres. Also, avoid any local sources of light too - street lights, headlights, and even your cellphone - as they'll spoil your night vision.

It may be tempting to watch NOAA's K-index to see when the auroras may show themselves, however be mindful of the fact that the K-index is an average of the geomagnetic intensity seen over the past three hours. So, if you wait for the index number to spike upward, you may have already missed all the action.

Above all, the best advice from Theresa and Darlene Tanner is to have patience. The auroras may not show up immediately. They may only last for a short period of time, and they may come and go. A little patience can go a long way towards seeing the best results. 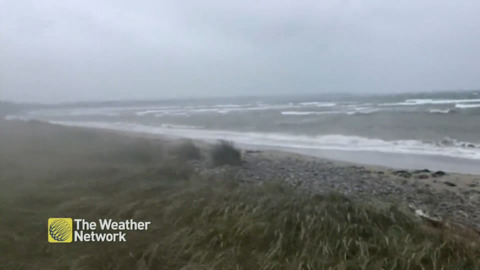