Expired News - Atlantic hurricane season 2017: Facts and figures thus far - The Weather Network
We use cookies on this site to improve your experience as explained in our Cookie Policy. You can reject cookies by changing your browser settings.   READ MORE I ACCEPT

Monday, September 18, 2017, 6:25 PM - As we move into the second half of the Atlantic hurricane season, which typically reaches its peak in activity around Sept. 10, itâ€™s a good time to look back at the season so we can gauge where we currently stand in terms of the long term averages and records.

Though this is not the most active hurricane season ever recorded, it comes at the end of a long, quiet period in Atlantic hurricane activity, and has produced two back to back major hurricane landfalls along the U.S. coast with devastating effects.

Dr. Phil Klotzbach, Research Scientist at the Department of Atmospheric Science at Colorado State University, is an expert in both hurricane seasonal forecasting and hurricane climatology. He frequently shares summaries of facts and statistics about the current hurricane season through his Twitter account (@philklotzbach).Â 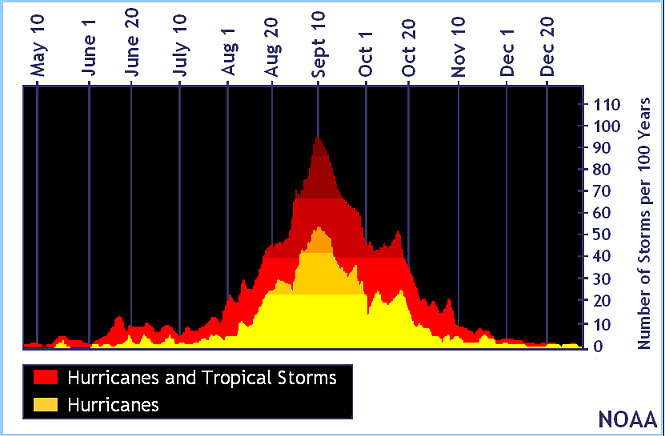 Here are just a few of Dr. Klotzbachâ€™s notes about the 2017 season so far:

As of mid-September, we are only through the first half of the 2017 Atlantic hurricane season. Though we donâ€™t expect the second half to be quite as active at the last few weeks, many of the same favorable conditions for storm formation and intensification will continue to be present through the early fall. So it is very likely that we will hear from the tropics at least a few more times before the season ends.

Note: Since this list was complied, Hurricane Maria, a Category 4 storm, developed in the Atlantic.

Watch below:Â Prior to a hurricane arriving, follow these steps