Expired News - Supernova shockwave speeds up as it plows through space - The Weather Network
We use cookies on this site to improve your experience as explained in our Cookie Policy. You can reject cookies by changing your browser settings.   READ MORE I ACCEPT

Supernova shockwave speeds up as it plows through space

Monday, November 5, 2018, 8:39 PM - It's something we rarely get to see outside of science fiction. This supernova shockwave has been plowing through an immense debris ring for over two decades now, and astronomers are reporting that it is actually speeding up!

Back in February of 1987, a new star appeared in the southern hemisphere sky. First spied by University of Toronto astronomer Ian Shelton, and Oscar Duhalde from the Las Campanas Observatory in northern Chile, it was found to be a supernova - the bright explosion caused by the death of a massive star.

It turned out to be the closest supernova to Earth since the invention of the telescope, at a distance of around 168,000 light years away, located inside a satellite galaxy to the Milky Way, known as the Large Magellanic Cloud.

Named Supernova 1987A, or SN 1987A, the expanding remnant of this explosion has become the most observed and studied in history, with astronomers repeatedly aiming telescopes at it for over 30 years. 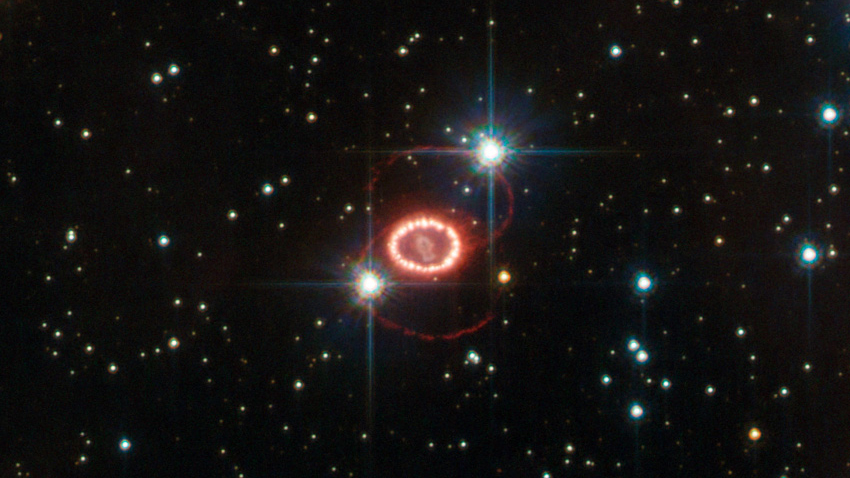 This image of Supernova 1987A, a combination of visible and infrared images taken by the Hubble Space Telescope, shows two outer rings, which from our perspective here on Earth look like an hourglass shape, and a bright inner ring of material. Credit: ESA/Hubble & NASA

The ring-shaped structures shown in the above image are thought to have been present around the star long before it exploded. Their exact origins are subjects of speculation at this time, but the bright glow of the inner ring is due to the intense ultraviolet flash of light emitted by the supernova.

Another effect of the supernova is the powerful shockwave that followed the explosion. This has been expanding into the space around the dead star, sweeping up dust and gas along the way, and for years now, astronomers have been watching this shockwave slamming into the inner ring of debris.

In the latest update to the story of this supernova remnant, a team of researchers at the University of Toronto's Dunlap Institute for Astronomy & Astrophysics, led by graduate student Yvette Cendes, has gone through all the observations, from 1992 to 2017, to compile this radio time-lapse of the event so far.

In this animation, we are seeing the emission of radio waves by the matter in the debris ring, as the expanding shockwave tears its way through, over the 25 year period.

The shift in colour shows changes in the abundance of material in the ring. Blue is the diffuse outer edges of the debris ring, while green, yellow, red and white denote the shockwave passing through denser regions of the ring.

By modeling what they're seeing in the observations, Cendes and her colleagues revealed that rather than being shaped like a flat disk, this supernova remnant is actually a torus. That is, it's shaped like a donut.

Furthermore, now that the shockwave has passed through the densest part of the ring, the team has noticed that it has gained speed, by about a 1,000 kilometres per second.

Just like what you'd expect, from watching depictions of these explosions in science fiction, this supernova shockwave is leaving destruction in its wake. Thus, the descriptions used here - plowing, tearing, slamming - are not simply for drama. According to the paper Cendes and her team published in the October 31 issue of the Astrophysical Journal, the shockwave is literally in the process of destroying the inner ring, tearing it apart as it passes through.

According to the team, by what is being observed so far, it is estimated that the ring will be completely destroyed by around 2025.

One extra interesting aspect to all of this is that there is not much known about the material that lies outside of these debris rings. So, as the shockwave continues to expand into space, it may provide us with even more information about the supernova's surroundings.