Expired News - 'It won't hit Earth': Asteroid flyby will serve as real test - The Weather Network
We use cookies on this site to improve your experience as explained in our Cookie Policy. You can reject cookies by changing your browser settings.   READ MORE I ACCEPT

Wednesday, October 11, 2017, 12:33 PM - Asteroid 2012 TC4, whose return has been anticipated for the past 5 years, is making a very close pass by Earth on Wednesday night, and astronomers will be watching it the whole time, to test their response to a real threat.

Discovered on October 5, 2012, by the PanSTARRS observatory in Hawaii, this roughly 16 metre-wide asteroid made a close pass by Earth at the time - around 95,000 km away, or roughly one-quarter the distance to the Moon. A quick trace of its orbital path, then, showed that it was going to make a return visit on October 12, 2017, possibly coming even closer to our planet during that pass. One thing astronomers knew for sure, though, it was no threat to Earth then, and it was no threat to us in the future, as well.

"We know the orbit of 2012 TC4 well enough to be certain that it won’t hit Earth," Paul Chodas, manager of the Center for Near-Earth Object Studies (CNEOS), at NASA’s Jet Propulsion Laboratory, said in statement in July 2017.

This artist's impression of 2012 TC4 depicts the asteroid flying past Earth during its close pass on Oct 12, 2017. Credit: NASA/JPL-Caltech

Based on nearly 500 observations of 2012 TC4, gathered around the time of its discovery and then as the asteroid was picked up again in 2017, astronomers had gathered enough information about the asteroid's path to know it, almost exactly. The "almost exactly" part of that statement was cleared up as it approached us over the past month or so.

Even going back to July 2017, astronomers had figured that 2012 TC4 could come as close as 6,800 kilometres, but no farther than 270,000 kilometres, during its October pass. Even at 6,800 km - which is less than 2 per cent the distance to the Moon, and well within the ring of geosynchronous satellites that orbit Earth - it still would have been a safe pass. 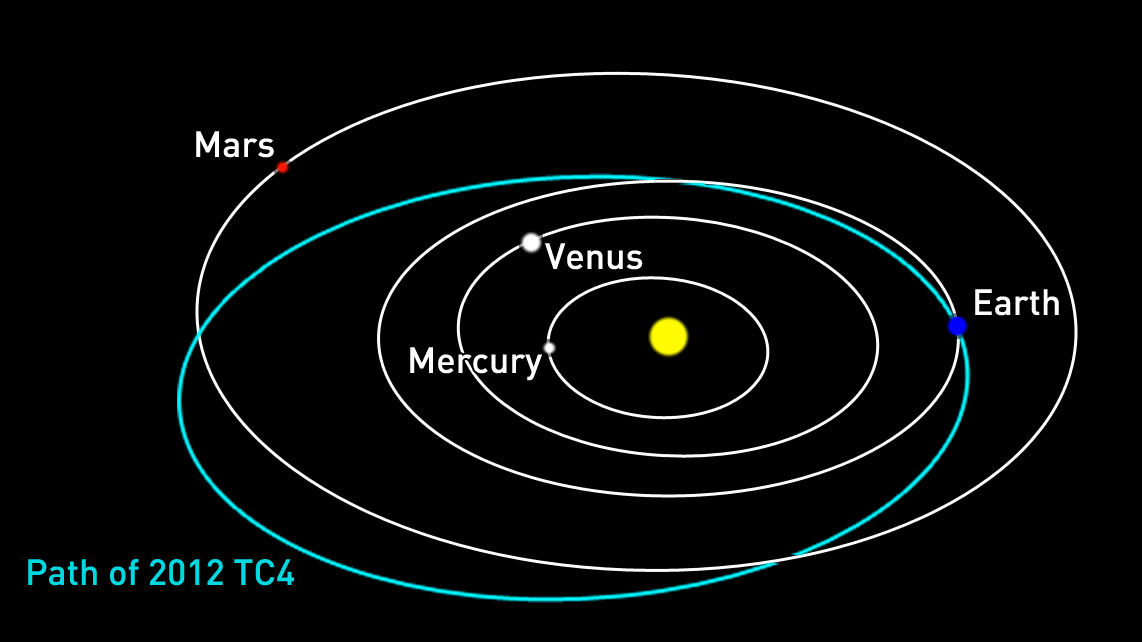 The orbit of 2012 TC4, in relation to the orbits of the inner planets. Planets & Sun are not to scale. Credit: NASA/JPL-Caltech/Scott Sutherland

Since we can rest, assured that asteroid 2012 TC4 is no danger to Earth, scientists are using this close encounter to test their global asteroid tracking system. Just as they did with Asteroid Florence, in September, astronomers at observatories and telescopes around the world will be tracking TC4's path, and using infrared and radar observations as well.

"This campaign is a team effort that involves more than a dozen observatories, universities and labs around the globe so we can collectively learn the strengths and limitations of our near-Earth object observation capabilities," Vishnu Reddy, who is leading the observation campaign for TC4 from the University of Arizona's Lunar and Planetary Laboratory, told NASA. "This effort will exercise the entire system, to include the initial and follow-up observations, precise orbit determination, and international communications."

The results of the campaign will narrow down the size of TC4, which is currently estimated at being between 10 and 30 metres in diameter, as well as define its rotation, shape, composition and even if it has any satellites!

We have already discovered some very strange things about these near-Earth asteroids, from Florence's two tiny moons, to the "skull" shaped dead comet, 2015 TB145, that flew past on Halloween 2015. What will 2012 TC4 reveal to us?