Expired News - All-you-can-eat landfill buffet spells trouble for birds - The Weather Network
We use cookies on this site to improve your experience as explained in our Cookie Policy. You can reject cookies by changing your browser settings.   READ MORE I ACCEPT

Thursday, August 2, 2018, 2:10 PM - Among all the types of waste we generate, plastic tends to pose the greatest problems.

Plastic has helped save lives — in the form of medical equipment, for example. But plastic has also become common in places where it is unnecessary. Do we really need disposable cups, knives, straws and forks?

These single-use products lay scattered across my university campus and drift throughout the city. Once in the environment, plastics pose chemical and physical risks to marine and terrestrial environments — and the animals that live there. These risks can be seen in marine birds like gulls.

Gulls are common birds that are often found in places where there is also plastic waste, hence they are good indicators of debris. Most previous gull studies have not looked closely at what types of debris gulls ingest, and those that have were unclear or inconclusive.

So, last year we decided to take a closer look.

Our research on debris ingestion focused on gull species that — despite being the main species at landfill sites and urban areas — have not been widely studied. 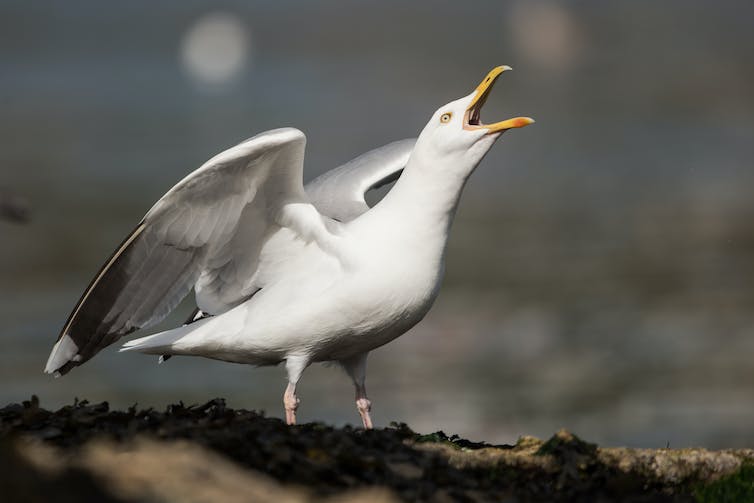 Herring gulls are generalists when it comes to food. They eat fish, but also eggs and garbage. (Shutterstock)

The majority of the 284 pieces of debris we picked out of the gulls’ stomachs were plastic (59 per cent). They were larger and heavier than the debris seen in other studies, possibly due to the bird’s proximity to an urban area. Because gulls can regurgitate indigestible items, it’s possible that the birds had eaten more debris than we found.

The debris ranged from pellets the size of a needle point to whole pieces of plastic such as a cheese wrapper, or other debris such as glass. The majority were single-use items.

Despite the plastic, glass and cardboard products they had ingested, the birds in our study appeared to be in reasonably good health.

However, other gull studies have found that eating garbage can limit the bird’s reproductive success. Among gulls, garbage consumption has been linked to poor egg quality and lower hatching and growth success of chicks.

Even though gulls have the ability to regurgitate materials, they may be exposed to high levels of chemical contaminants such as polychlorinated biphenyls absorbed by plastics from the environment, or bisphenol A an organic synthetic compound often in plastic products.

These compounds cause egg mortality, can lead to the birth of a greater proportion of female birds and contribute to decline in bird populations.

Other birds, including albatross, cannot regurgitate indigestible debris. The material can become lodged in their digestive tracts and obstruct the passage of food. This can lead to poor health, poor reproductive success and even death.

As long as waste-management facilities are readily available and accessible, debris will continue to end up in natural environments.

The open access aspect of landfill facilities allows for lightweight debris to spread, entering water bodies and causing further debris exposure for marine species. Through this exposure, birds like gulls are able to swallow plastic debris or become entangled in it.

We can buy fewer plastic products or items in plastic packaging. We can also refuse single-use disposable plastic items such as straws, plastic bags, Styrofoam containers and so on.

These seemingly insignificant decisions would collectively visibly reduce plastic waste and our overall garbage footprint — and put less waste into landfills and into the mouths of birds.

VIDEO: SHOULD PLASTIC BAGS BE BANNED?