Expired News - Alien 'asteroid' actually a lump of ice - The Weather Network
We use cookies on this site to improve your experience as explained in our Cookie Policy. You can reject cookies by changing your browser settings.   READ MORE I ACCEPT

Wednesday, December 20, 2017, 3:57 PM - The fundamental job of astrophysicists and astronauts is to explore the universe, and find what is out there. This year, the universe explored us.

On October 19, the Pan-STARRS 1 survey telescope in Hawaii captured a faint streak of light during its nightly search for asteroids and comets. Astronomer Rob Weryk realised it had a trajectory unlike anything seen before, and follow-up data taken over the next few nights confirmed it had come from outside our solar system. Humanity had identified its first alien visitor from another star.

What exactly is this interstellar object, which has been named ‘Oumuamua from the Hawaiian for “the first messenger from afar reaching out to us”? This is a difficult question to answer because it was not clear how 'Oumuamua compares to other bodies that belong to our solar system. Its unusual elongated shape has even prompted some to question whether it might have been created artificially by an alien civilisation.


But my colleagues and I have now discovered that while it appears to be an unusually long rocky asteroid it may actually be an icy body covered in a protective crust of organic chemicals.

We were already pretty certain 'Oumuamua was not artificial. Radio telescopes have been used to listen for signals from 'Oumuamua but not heard anything. Its path through space also suggests that it is only moving because of gravity. So all initial lines of inquiry pointed to it being a natural object.

However, there was still a puzzle. The most likely visitor to our solar system would be a giant lump of ice. As it approached the sun, such an icy body should start to melt and release a tail of gas behind it . Yet, despite coming within 23m miles of our sun, ‘Oumuamua showed no sign of this kind of outgassing. Why, instead, did it look like an asteroid?

Our team reacted quickly to the discovery by getting time to use the Very Large Telescope in Chile and the William Herschel Telescope in La Palma within 48 hours. We used these facilities to measure how 'Oumuamua reflects sunlight by looking at the wavelength of the returned light. This powerful technique can reveal the composition of an object and whether it has rocky minerals of ices on its surface. 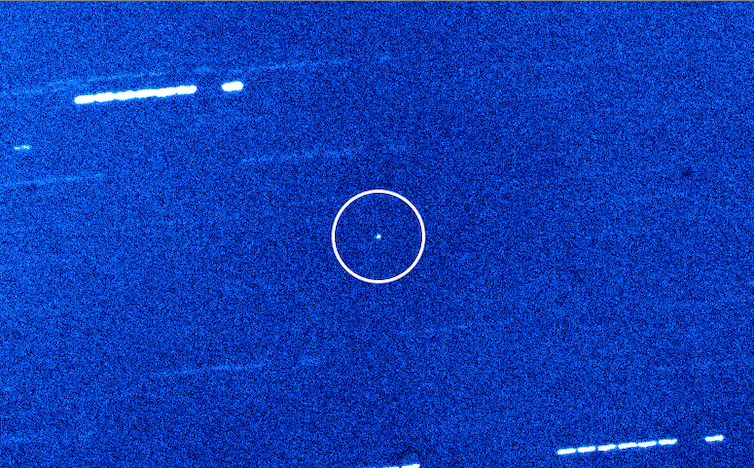 Our data revealed its surface was red in visible light but appeared more neutral or grey in infra-red light. Previous laboratory experiments have shown this is the kind of reading you’d expect from a surface made of comet ices and dust that had been exposed to interstellar space for millions or billions of years. High-energy particles called cosmic rays dry out the surface by removing the ices. These particles also drive chemical reactions in the remaining material to form a crust of chemically organic (carbon-based) compounds.

So although ‘Oumuamua appeared as an asteroid-like point of light in our telescopes, it may be icy in its interior. And its insulating red rock-like surface could be the consequence of its lonely journey between the stars. Indeed, another study using the Gemini North telescope in Hawaii showed its colour is similar to some “trans-Neptunian objects” orbiting in the outskirts of our solar system, whose surfaces may have been similarly transformed.


Where did it come from?

The other big question is where did ‘Oumuamua come from? One possibility is that it emerged from a planet-building process. Planets are built from smaller rocky asteroids and icy comets, but this is a messy business. Many trillions of objects would have been thrown into interstellar space as our planets formed and settled down into their current orbits. Additionally, comets have been lost from the Oort Cloud surrounding our solar system, pulled away by passing stars and the tides from the Milky Way galaxy in which we live.

If all stars are as wasteful as our sun in building solar systems, there should be large numbers of interstellar objects out there in our galaxy. But we would only see them if they get close enough to the sun and Earth to be detected with our current generation of telescopes. Earlier this year I was part of a study that showed there could be 1015 (1,000 trillion) such objects per cubic light year.

Several astronomers have found that ‘Oumuamua cannot be tracked back to any known star, but it approached from the direction that the sun is moving towards. This is the most probable direction any interstellar object will come from, like clouds of insects hitting a car windscreen as you drive through them.

‘Oumuamua has already passed the orbit of Mars and is travelling outward above the asteroid belt. This winter, if you can find the Great Square of Pegasus in the night sky, you can wave farewell to our first interstellar visitor. But combining previous studies with the discovery of ‘Oumuamua suggests there should be a similar object somewhere within the orbit of Mars at any time, not yet seen. The universe is closer than we thought.