Expired News - A Full Wolf Moon shines this week. Here's when - The Weather Network
We use cookies on this site to improve your experience as explained in our Cookie Policy. You can reject cookies by changing your browser settings.   READ MORE I ACCEPT

News
Editor's Choice
Alberta glacier suffers record melt in 2021
Want to know what the Moon will look like on any particular day or night of the year? Just watch this short NASA visualization and keep your eye on the date!
OUT OF THIS WORLD | Night Sky this Week - a weekly look at what there is to see in the night sky

A Full Wolf Moon shines this week. Here's when

Look up old references to the January Full Moon and you will see names like Full Wolf Moon, Old Moon, Snow Moon and even Moon After Yule.

In most cases, the best time to observe an object in the night sky is when it's biggest and brightest, but such is not necessarily the case with the Moon.

Viewing the Full Moon has its own merits, but when you want to see the details of the Moon, it's actually best to watch the boundary between night and day - the terminator - as it advances across the Moon's surface.

Watch below, to see how much more the details of the craters and other terrain pop when the lunar terminator is nearby.

Details are still difficult to pick out with the unaided eye, however, simply due to how small the Moon is in the sky on any given night. It's best to use a pair of binoculars, at the very least, to view these lunar details. If you have access to a telescope, that is even better.

What can we actually see?

The videos above show off the breadth of features, and the video that leads off the article even labels the craters as the terminator sweeps past them, but here is a basic look at the most prominent things you can see on the Moon. 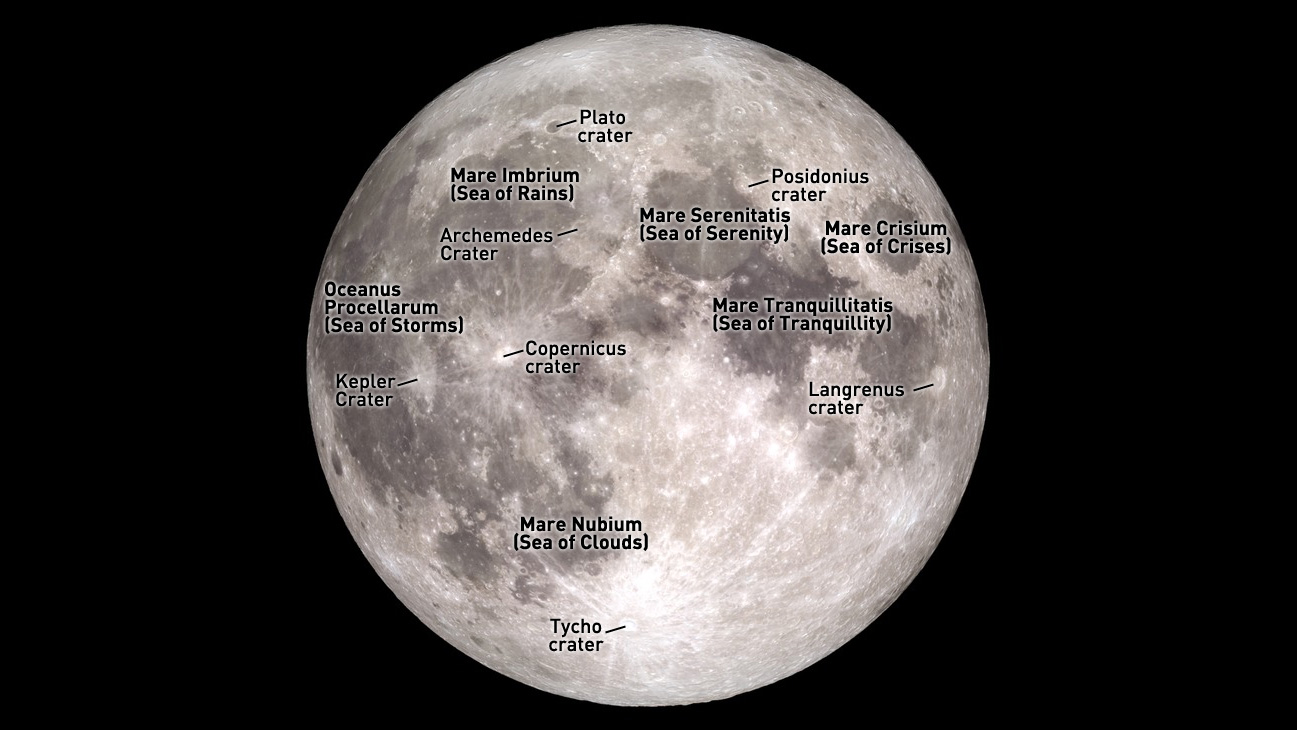 Some of the Moon's most prominent features. Credit: NASA/S. Sutherland

This is not a complete list of lunar features, by any measure, as there are far too many to detail in a short web article.

Want to find where the various missions have landed on the Moon, though? We'll never see the landing sites in enough detail from Earth, even with our best telescopes, since it comes down to a matter of resolution. According to Cornell University astronomer Lynn Carter, we would need an optical telescope around 20 times larger than anything we currently have on Earth to be able to see the lunar landing sites with good enough resolution to pick out that kind of detail. The Moon is too far away and the objects left behind on the Moon's surface are too small.

We can see the general locations, however. To find the Apollo 11 site - the first time humans walked on the Moon - look for the tiny point of light towards the southern edge of the dark Sea of Tranquillity. That's Moltke crater, which lies just southeast of Tranquillity Base.

NASA's Lunar Reconnaissance Orbiter (LRO) has photographed the lunar landing sites, however, during its many orbits of the Moon. The high-resolution imagery it takes is still limited in the exact details it can give us, but it shows the equipment and tracks left by the astronauts and their moon rover.

These are just two examples. The rest can be seen on NASA's website.