Editor's Choice
Bluenose celebrates its centennial
In partnership with

Wednesday, March 6th 2019, 3:12 pm - During the mid-winter break, many vacationers head south to sandy beaches and turquoise waters. But in their efforts to unwind — and warm up — they often put themselves at risk of drowning by committing a simple cognitive error referred to as “tourist brain.”

There is also a tendency for tourists to believe that tour guides know whether a beach is dangerous and that their suggestions on where to swim is based on safety, but this also isn’t always true.

In Costa Rica, for example, an average of 20 tourists drown each year. Most of those drownings involve tourists from the United States, Canada and Germany. These beaches aren’t any more dangerous than other locations — the number of tourists who drown in other popular destinations is simply not known or reported.

Tourists are a high-risk group for drownings. They’re generally unfamiliar with the beach and its safety measures, and have poor knowledge of beach hazards such as rip currents and breaking waves. This lack of knowledge is further exacerbated by language barriers, overconfidence in swimming ability and the tendency to make unwise swimming decisions after too many beers and umbrella drinks. 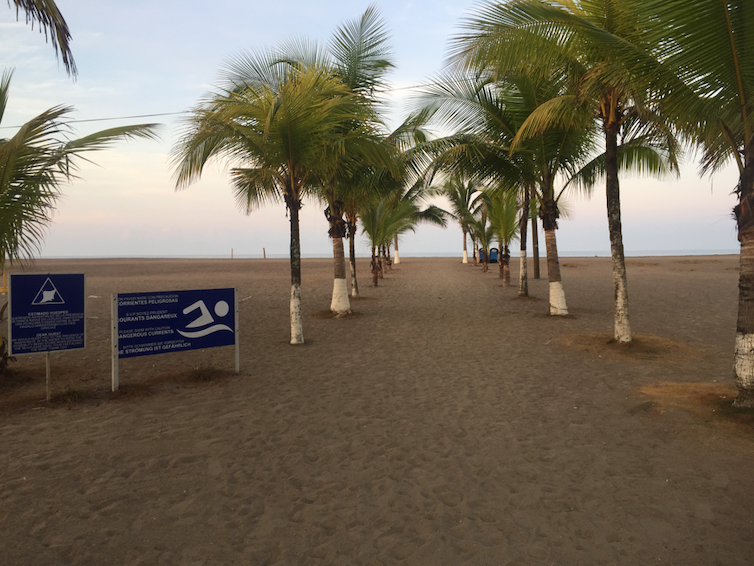 Visual cues such as this palm-lined walkway can draw you to the water. While one of the signs warns hotel guests to be careful swimming, the design makes it appear that swimming is encouraged. At the end of this pathway is a series of semi-permanent rip currents along a beach popular with tourists on the Pacific coast of Costa Rica. Chris Houser

Many visitors simply do not think about water safety because beaches also offer plenty of distraction and temptation — drinks, vendors and people watching.

Many beaches popular with tourists do not have lifeguards or systems in place to warn beach users about dangerous waves, fast-changing tidal conditions, dangerous marine life such as sharks and jellyfish, and rip currents. Rip currents are believed to be the primary reason for rescues and drownings on recreational beaches in the United States and around the world.

Rip currents (commonly referred to as “rips” or colloquially as “rip tides”) are found on ocean beaches and some large lakes around the world. Driven by the breaking of waves, these currents extend away from the shoreline and can flow at speeds easily capable of carrying swimmers a great distance from the beach.

While it can be difficult to spot a rip, they can be identified by an area of relatively calm water between breaking waves, a patch of darker water or the flow of water, sediment and debris offshore.

A person caught in a rip is transported away from shore into deeper waters, but not pulled under the water as is commonly believed. Drowning starts when the swimmer is unable touch the bottom to keep their head above water. If they are a weak swimmer or try to fight the current, they may panic, fail to effectively evaluate the situation or find a way out of the rip and back to shore.

Even when people are aware of rip currents and other beach hazards, they may not make the right decisions. Despite the presence of warnings, our actions are greatly influenced by the behaviour of others, peer pressure and group think. The social cost of not entering the water with the group may appear to outweigh the risk posed by entering the water.

College students on spring break or taking part in study abroad programs are prone to taking risks when on the beach. Their actions are guided by peer participation, sensation seeking and perceived benefits of being part of the group. Rather than stay on the beach, weaker swimmers will put themselves in danger by following the group into breaking waves and deeper water. Young men are the most at risk for following the group and putting themselves in a dangerous situation. 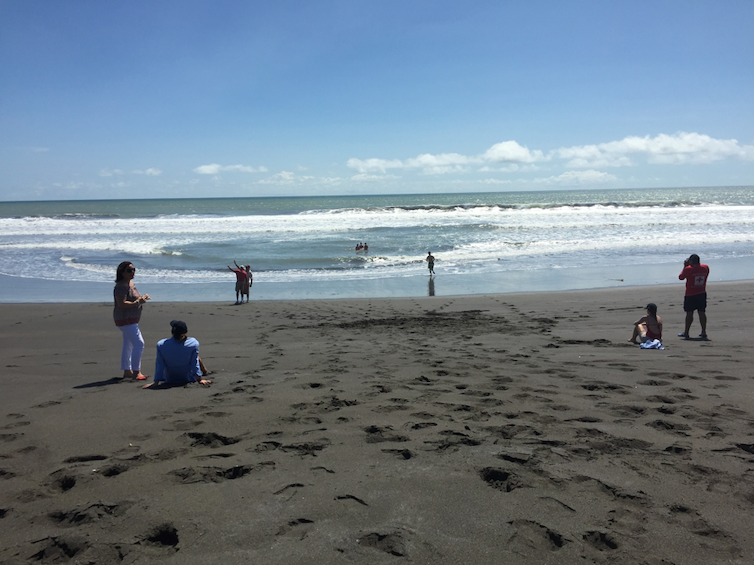 Respondents to a survey believed that this beach was safe because there were people on the beach and in the water. The rip current in the centre of the photograph was flowing at 1.5 meters per second at the time this photograph was taken. Chris Houser

In recent years, a large number of highly publicized drownings have involved students studying abroad. In 2011, for example, three teenagers from Ohio were swept out to sea at Playa Bejuco on the central Pacific Coast of Costa Rica and drowned.

If someone enters the water and does not encounter strong waves or currents, they’re more likely to engage in risky behaviour the next day and the next, and so on. The behaviour of beach users is affected by confirmation bias, a cognitive shortcut where a person selectively pays attention to evidence confirming their preexisting beliefs and ignores evidence to the contrary.

But dangerous currents are not present everywhere or at all times on the beach — the risk is different every time and every place you enter the water. Tourists are three times less likely to make safe swimming choices than residents and regular beachgoers from the region. 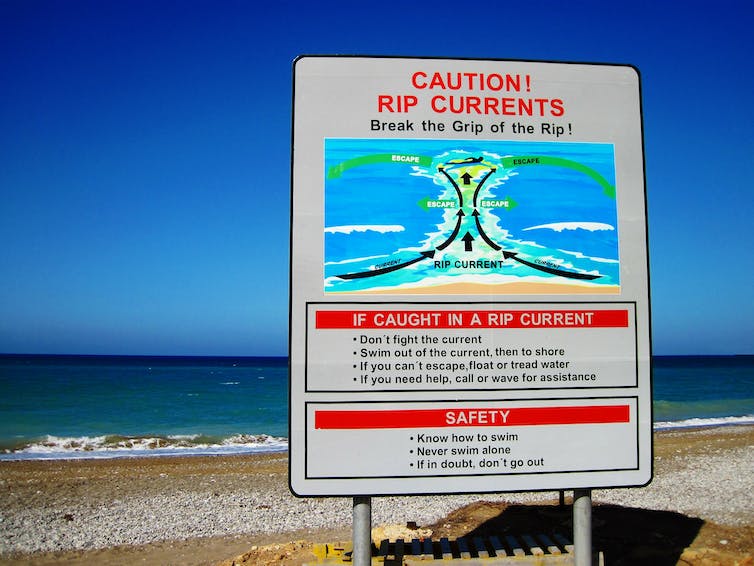 How to escape a rip current. Pixabay

Vacationers can stay safe only if they are aware that beaches at tourist destinations may be dangerous. They should also choose to swim at a beach patrolled by lifeguards who will do rescues and intervene when someone puts themselves at risk.

Just because a beach is accessible, has numerous attractions and is near to a resort, does not make it safe.

Chris Houser, Professor of Earth and Environmental Science, and Dean of Science, University of Windsor