A moose drowned at Parlee Beach on Monday. (Brian Francis/Facebook)

Beach-goers were caught by surprise Monday when a young bull moose made an appearance on Parlee Beach, but the unusual appearance turned tragic when it drowned about 500 metres from shore later that afternoon.

The Department of Natural Resources said calls started coming in around 10:30 a.m. from Shediac Bay, southwest of Parlee Beach.

Bonnie Leger was enjoying a barbecue at her Pointe-du-Chê​ne home with her 11-year-old son Jordan when the animal startled them.

"I just happened to turn my head and it came running," Leger said, "It was huge, it was black and we were all shocked. It kind of stopped by a tree and it looked around for a little bit and then went around on his way."

Unfortunately, the moose then headed in the direction of Parlee Beach, where the Department of Tourism said about 1,500 people were enjoying the water amid Monday's heat.

With such a large crowd, and an unusual moose sighting, pictures and videos were quickly shared across social media. 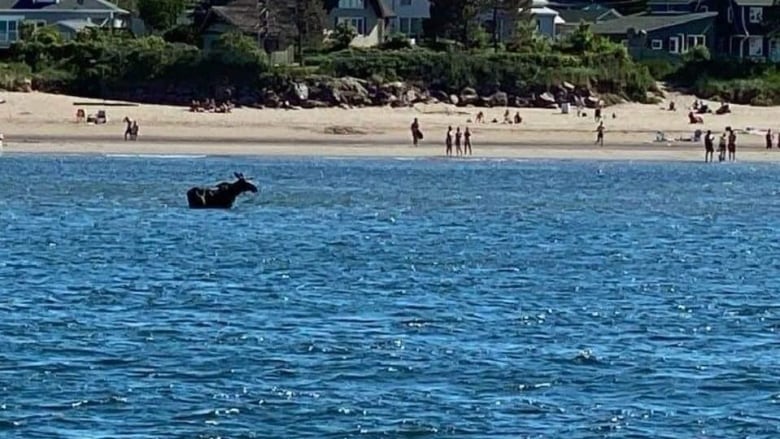 A moose drowned at Parlee Beach on Monday. (Brian Francis/Facebook)

Pam Novak, director of wildlife care at the Atlantic Wildlife Institute, said she started to receive calls in the morning that continued throughout the day.

"What was so unfortunate and so sad with something like this, it was such a visual all day," she said. "And it was continually a worse and worse predicament."

Pictures and reports of the animal being chased and harassed angered Novak and some onlookers.

Nick Brown, a spokesperson with the Department of Natural Resources, said the ranger's office in Dieppe received a second call about the moose around 5:00 p.m.

He said when the officials arrived, the animal was already in the water 500 m from shore.

"Officials went to try and help the animal via boat, hoping to guide it toward shore to a more isolated location, but the animal was already showing signs of fatigue and going under water."

Gerald Robichaud was following along with the social media posts at his home in Lakeville and decided to take a drive to see what was happening. He saw rangers' trucks at the Pointe-du-Chene wharf, which he thought was unusual and went to take a look.

He said he got there just in time to see rangers and federal fisheries officers pull up in a boat and bring the carcass of the animal ashore.

"It was maybe a six or seven-hundred pound bull. It was only maybe two years old, tops," said Robichaud, a life-long hunter.

He said the death was a loss, because that animal could have been enough meat to feed three or four families for months.

This article was written for the CBC by Tori Weldon.