Monday, March 4th 2019, 3:29 pm - It’s not possible to give a simple yes or no answer immediately, says one climate researcher.

As temperatures at Kew Gardens soared past 21℃, February 26 2019 became the UK’s warmest winter day on record. That same day, a number of wildfires broke out in several different parts of the UK and Ireland – there was a substantial blaze on Marsden Moor, Yorkshire, gorse fires on Arthur’s Seat overlooking Edinburgh, and in the Dublin Mountains, and two separate fires in Ashdown Forest, East Sussex. Given the unusual weather, and the unusual winter fires, an obvious question is: has human-caused climate change played a role? 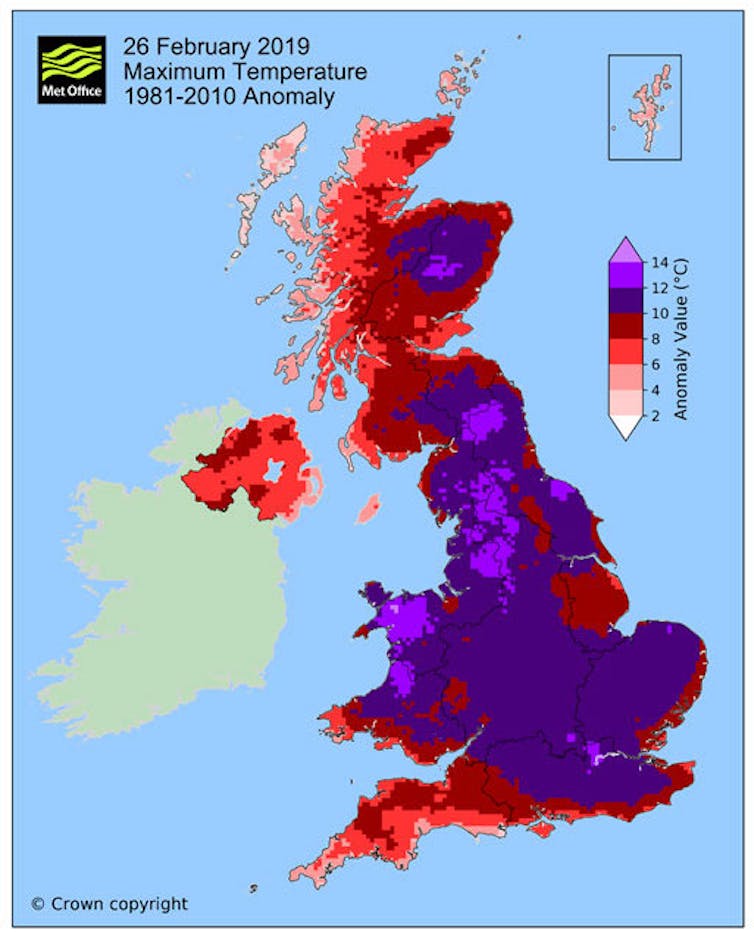 I research the impact of climate change and look at questions exactly like this, so I’m well aware these things are complicated and need proper study – it’s not possible to give a simple yes or no answer immediately. But we can make a first assessment based on general understanding.

A first thing to clarify is exactly what we are talking about – increased risk of fire due to the environmental conditions, or the actual occurrence of fires. The fires themselves were almost certainly started by people in some way or other, either deliberately or, more likely, accidentally (lightning fires are rare and there were no storms). But the fact that so many fires took hold and spread at the same time is a clear indication that the environmental conditions were conducive to fire, and that’s what I’ll focus on here.

By “environmental conditions”, I mean both the weather at the time of the fire, and the state of the dead leaves, twigs and branches, and in some locations, peat, that fuel the fire. The amount of fuel and its dryness is crucial, and depends not just on the weather in the preceding days, but also the weeks and months before. Land management methods including peatland drainage can also play a role.

The warm conditions in the days up to Feb 26 were certainly very unusual for this time of year. There was high pressure centred over central Europe and the British Isles, which not only brought settled, dry conditions beneath it but also featured winds moving clockwise around it. This meant the UK and Ireland, on the western edge of the high pressure, experienced warmer air from the south.

Whether that kind of weather system is becoming more likely due to climate change is a difficult question to answer. However, at this point we can say that when such conditions occur, they are likely to be hotter than they would have been without climate change, as a result of the general warming trend. Research is already planned to establish how much of the hotter, drier conditions were due to climate change.

A further question is whether the dry conditions preceding those few days were due to climate change. This includes both last summer and the winter in between.

Climate change is expected to mean hotter, drier summers in the British Isles, and it made the 2018 heatwave 30 times more likely. So if vegetation was made more susceptible to fire by last summer’s heatwave, this would be a link to climate change. Again, this also needs further research.

However, while winters are becoming generally milder, scientists also expect more rainfall. So on the face of it, this year’s dry January was different to what we expect from climate change. However, in a complex, variable system such as the weather, it’s important not to just look at averages but also the ups and downs, and also look at combinations of different weather factors and not just individual factors like rain or temperature in isolation.

Although we expect winters to become wetter on average, not every winter will be wetter – we’ll still get dry Januaries sometimes. And given the long-term warming trend, we can expect that when we do get winters with lower rainfall, the fuel will dry quicker due to increased evaporation. So while on average the UK and Ireland might expect reduced fire danger in winter, in years when winters are dry and mild, it could be higher.

Of course all this needs working through properly, and no doubt will be. Colleagues and I did do a very preliminary study on this for the 1st UK Climate Change Risk Assessment years ago which suggested that annual average fire danger would increase with climate change. This was since backed up by a more detailed study which suggested that wetter conditions would generally reduce the risk of fire in winter, partly offsetting the increased risk in summer in the annual average. However, this is not inconsistent with my argument here – although overall we might expect climate change to reduce the chances of winter fires in most years, in years when winter rainfall bucks the trend and is drier than usual, we may actually see increased fire risk.

So on the question of whether these specific fires are linked to human-caused climate change, I’d say “maybe – we need to look into it more”. But on a more general question of whether we should expect more fires in the British Isles as the world continues to heat up, the answer is clear: yes.

FROM THE ARCHIVE: THE UK JUST EXPERIENCED ITS WARMEST WINTER DAY ON RECORD, SEE HOW WARM IT GOT