A residential parking ban will start on certain Winnipeg streets Saturday at 7 a.m.

Snow-clearing operations are scheduled to move through different areas until 7 p.m. Monday, so people living in Winnipeg should check what snow zone they're in to know when it will be their street's turn, the city said in a news release.

The first residential streets will be cleared beginning Saturday at 7 a.m. and continuing until 7 p.m. Those streets are in snow zones C, G, J, L, P and S, the city said.

You can find your snow zone online with the city's online address lookup tool, by using the [Know Your Zone app])(https://humanresources.ad.cityofwpg.org/psp/hrprd/?cmd=login&languageCd=ENG&) or by contacting 311, the city said.

You can also sign up for winter parking ban notifications through the Know Your Zone app.

The city encourages residents who park on the street to figure out what zone they're in and when it's scheduled to be plowed ahead of this weekend so they can make alternative arrangements for where to leave their vehicles, like in a driveway, a parking lot or on a street that's already been cleared. 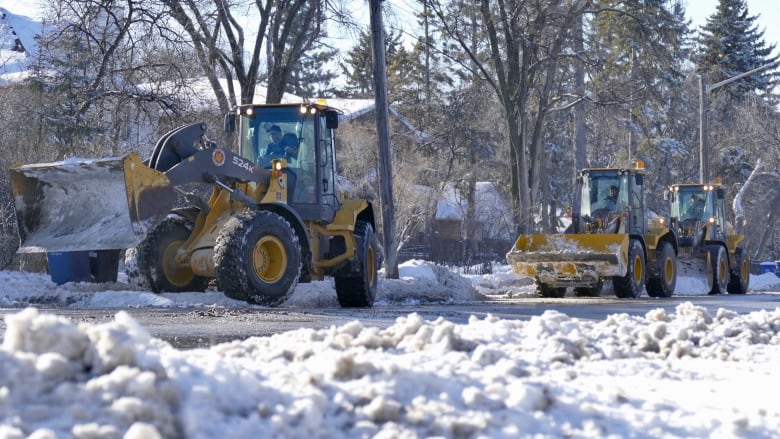 Three snowplows drive down a Winnipeg street. A residential parking ban will be in effect in some parts of the city starting Saturday morning to make way for snow clearing. (Trevor Brine/CBC)

Vehicles parked in violation of the ban could be slapped with a $150 ticket, the city said, though that goes down to $112.50 if you pay the fine early. Your vehicle may also be towed to another street that's not currently being cleared.

If you believe your vehicle was towed because of the ban, you can contact 311 for help finding it, the city said.

You can also contact 311 or fill out the city's online snow removal request form if your street doesn't get plowed as scheduled. Crews will get to it after plowing has been completed across the city, the city said.

About 300 pieces of heavy equipment will be used for the residential street snow-clearing operation, so drivers are reminded to drive to conditions and use extreme caution when going past snow-clearing equipment, the city said.

With temperatures set to warm up in the region in the coming days, crews will be able to clear residential streets where recent thawing and freezing has caused ice to build up while minimizing the risk of damaging curbs and boulevards.

This article was originally published by the CBC